Queer prom brings the party to the ‘Underworld’ 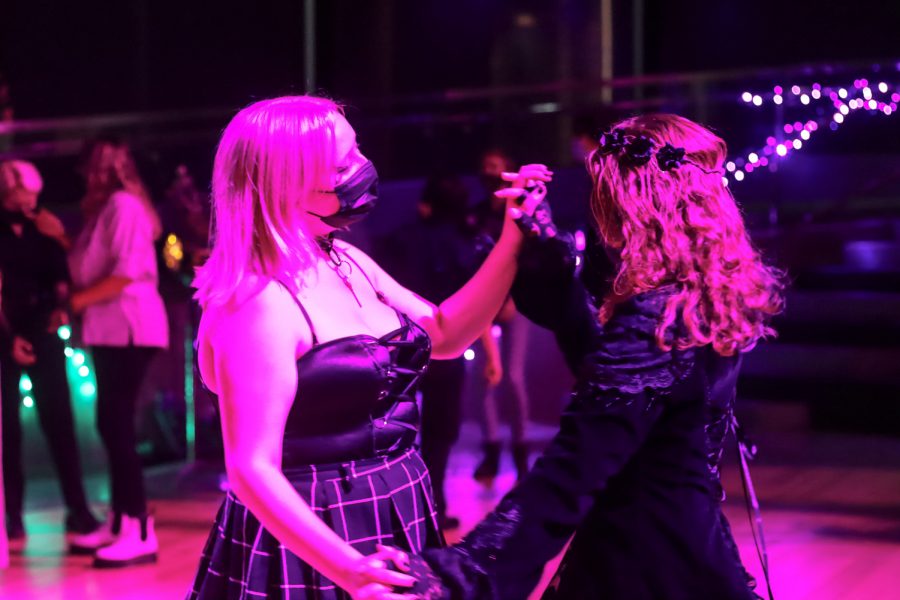 Hosted by the Gender and Sexuality Alliance and the Gender Identity/Expression and Sexual Orientation Resource Center, the underworld themed prom occurred at 7 p.m. on Oct. 16 at the Elson S. Floyd Cultural Center. It featured a dance floor, games to play, places to relax and catered food from Moscow Bagels and Deli.

Juniors Eli Baker and Jenna Danna came to the prom as a couple. Baker said he has had his share of socially-anxious situations but the welcoming environment of the crowd was nice to be around.

Danna identifies as a member of the queer community and said it was nice to have a prom where they had buttons to identify your pronouns.

Senior Rachel Hanson decided to go to the prom on a whim because she didn’t have anything else to do. She said it was nice that there were snacks and areas for people to socialize. She loved the ambient vibe of the atmosphere and it was nice to have a prom that represents her as a lesbian.

GSA President Nick Diaz, helped to organize the event. He said he wanted to plan it for people who were stuck at home during the pandemic with their families, which may or may not accept them. Having a prom that represents someone is the best thing ever, he said.

“I identify as male or male-ish, but I’m wearing a dress essentially and I have heels on,” Diaz said. “So it’s kind of breaking boundaries of gender and being myself without being afraid of what people are going to think of me, because we’ve created a really safe space.”

Moscow Bagels and Deli was chosen as the vendor for food because it was a way to cater to different dietary restrictions without resorting to pizza.

Junior GSA member Lindsey Havig, who helped organize the event, said events that represent the LGBTQ community don’t happen as often as they should.

Junior Liam Drane said it feels “f***g amazing” to have an event that represents them. They decided to come to queer prom to be with their people and because they like to be at an event where LGBTQ people are in the spotlight. They really enjoyed themselves and that they saw people feel comfortable in a way they don’t normally see.

“I plan to dance and have fun with all of my girls, gays and they’s,” Drane said. “Just meet as many people as I can and help as many people come out of their shells as they can.”