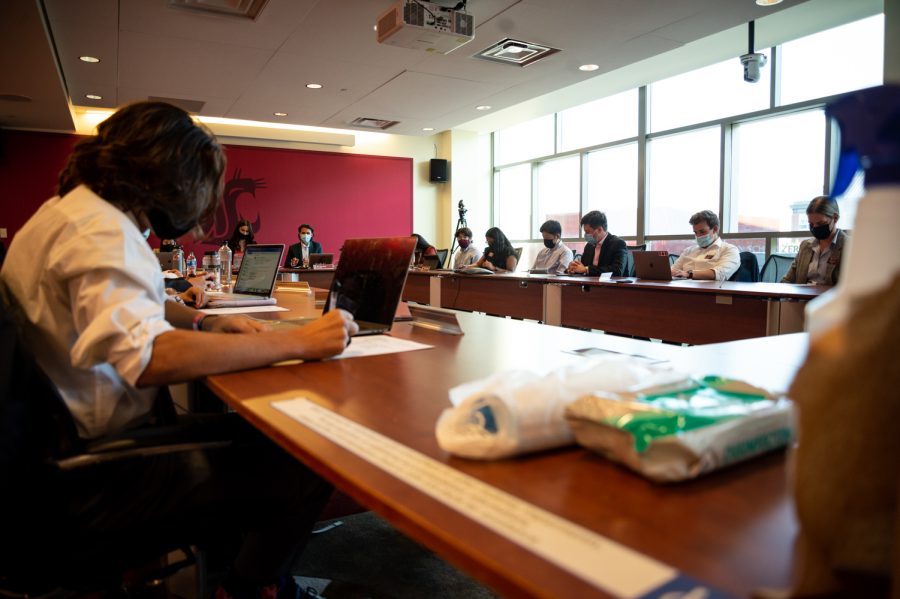 ASWSU senators vote on campus-related issues and decide how to move forward during a meeting in the Compton Union Building.

Doster, senior strategic communications major, said he resigned because he is graduating in December and is focusing on a full-time internship; he thought it would be smart to give the seat to someone who has more availability than him.

The best part of being involved in ASWSU was being able to meet other people with different stories, he said.

“It’s cliche, but you get to meet so many people from different backgrounds and have different ways of thinking. It kind of challenges you to think in different ways,” Doster said. “Overall, I would do it again in a heartbeat.”

Doster — who previously served as ASWSU vice president — said he did not have difficulty managing his ASWSU responsibilities and other activities until this year.

The person who ends up filling his position should take the time to learn as much as possible about the school, Doster said.

“Take things seriously, but not seriously enough where your feelings will get hurt if something doesn’t go your way,” he said. “It’s something to help build yourself and your peers up. It’s student government, not real government.”

ASWSU President Brian Patrick said Doster did a great job in his role and is sad to see him go, but he understands Doster has a busy senior year.

The application for Doster’s position was open for two weeks and two were sent in, Patrick said.

The two candidates will be presenting in front of ASWSU’s 22 senators on Oct. 27, Patrick said. They will have five minutes to discuss why they are interested in ASWSU and why they think they will be helpful to the position they applied for.

Once the five minutes are up, the senate has five minutes to ask questions, such as if they are declared in their college and if they have read the ASWSU bylaws.