Movie review: ‘Dune’ will make sci-fi geeks of us all

Film adaptation forces sexism in sci-fi out of plot 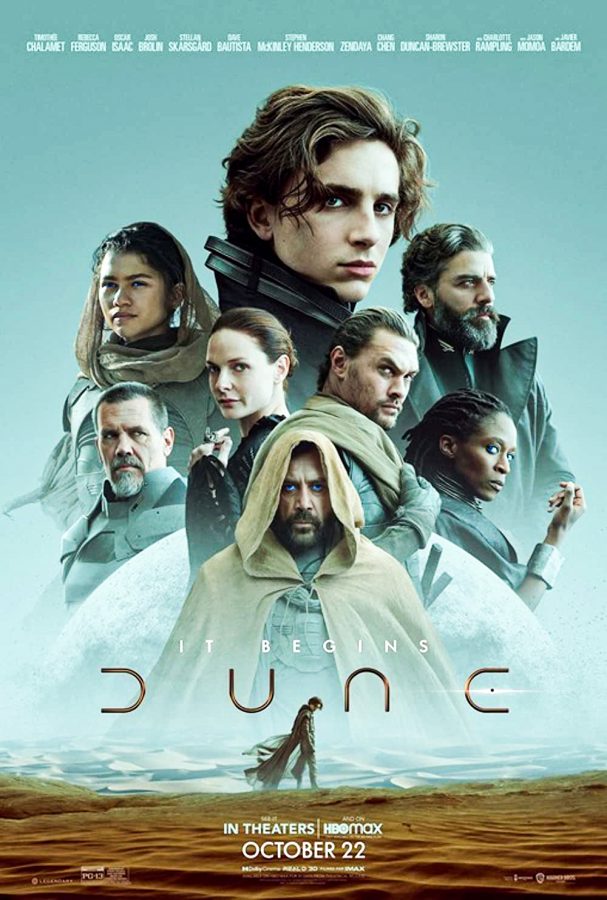 Timothée Chalamet’s acting and Denis Villeneuve’s vision take the new movie adaption of Frank Herbert’s 1965 novel to a level that everyone can appreciate.

Frank Herbert’s 1965 science fiction novel, “Dune” is so rich in its thematic complexity and characterization that no two people will experience the book the same way.

It is for this reason that the novel has been called “unfilmable.” Even if it were possible to capture the depth of the original novel in movie form, Time asks, “would there ever be enough of an audience consensus to recognize it as such?”

Still, Denis Villeneuve decided to take on the project. Originally set to release in November 2020 but delayed because of COVID-19, Villeneuve’s “Dune” was released in theaters and began streaming on HBOMax on Friday.

The film itself is an incredible cinematic experience — even if you are not the biggest fan of sci-fi. Its $165 million budget was put to good use in creating the vast deserts of the planet Arrakis — showing the unique technology and ways of the life of the people of Herbert’s worlds — and acquiring the very best acting talents to bring the characters from the original novel to life.

Timothée Chalamet in particular gives an incredible performance in the lead role of Paul Atreides. Paul is fifteen years old and has been trained from birth to become the leader of his family, House Atreides.

Paul is portrayed in the novel as thoughtful, quiet and strategic — traits Chalamet embodies perfectly in the role. However, he also adds moments of naivety and impulsivity to the character that reminded me of Paul’s youth in a way I really appreciated. It also set up a starting point for him to have some incredible development over the course of the films.

As with many science fiction protagonists, it is made clear that Paul is no ordinary boy. Because of his father, Leto, played by Oscar Isaac, he is already primed to become a political leader. But he has also inherited certain superhuman abilities because of his mother, Jessica, played by Rebecca Ferguson and her devotion to the powerful matriarchal Bene Gesserit.

Without spoiling too much, the Bene Gesserit are an organization of women in the Dune universe that has religious, scientific and political motivations (and we love a powerful movement of women). The members also have superhuman mental and physical abilities. The group is extremely complex and is only a tiny slice of the tumultuous sociopolitical world in “Dune” that has made it so difficult to bring to the big screen.

Villeneuve’s version took that difficulty and made it work for him. And the final result may be the movie that finally brings non-sci-fi lovers to the other side.

The first attempt to create a film version of “Dune” was by Alejandro Jodorowsky in the 1970s, but that was eventually shut down due to creative disagreements. The other was made by David Lynch in 1984; despite being a box office failure and a critical disaster, Lynch’s “Dune” has been influential in the world of science fiction movies for nearly four decades now.

Villeneuve’s version is poised to have the same influence, without the many shortcomings of Lynch’s, which included a confusing screenplay, poor world building and extremely lacking characterization — all things that would turn away any newcomer to the genre.

Thanks to the technology and talent available today, Villeneuve’s “Dune” does not have these same problems. The choice to divide the adaptation into multiple films has also been undoubtedly advantageous and gives Villeneuve the chance to go more in-depth into the fictional labyrinth that is “Dune.”

The new “Dune” also breaks a pattern that has been prevalent in science fiction for far too long — as the genre is stereotypically targeted toward men, liberties are often taken with female characters. They are either overly sexualized, totally flat or virtually nonexistent.

Think of the women’s outfits in “Star Trek” and the absence of any relevant female characters besides Princess Leia in the original “Star Wars.”

Although the issue has been steadily improving, there is still an issue that women in sci-fi cannot seem to exist without a romance subplot or without sacrificing things for the sake of the men in the story.

This casual sexism sometimes happens in the original novel, especially with Paul’s mother, Jessica, who is forced to seduce her enemies at certain points. However, in the new movie, Villeneuve does an excellent job of subverting this stereotype. This makes it an important watch for all movie lovers, young and old.

Even with romance and the portrayal of some casual sexism, the female characters like Jessica and Zendaya’s Chani are not overly objectified, nor are their stories so intertwined with those of the male characters’ that their characterization is lost in the execution of the plot.

Not to mention that one of the most powerful forces in the novel, the Bene Gesserit, is a syndicate of almost exclusively women.

If the new “Dune” franchise is successful and keeps up with its progressive approach towards women in science fiction, it could alter sci-fi stereotypes that have seemingly been present since the genre’s conception.

The film that was released on Friday is a promising start to a series with a complicated reputation. It is in a unique position to usher in a new era of science fiction film and define a generation of both film nerds and sci-fi nerds alike.

Let us hope that as the franchise continues in the coming years, Villeneuve is able to do what no filmmaker has done before and do cinematic justice to Frank Herbert’s original iconic work while including the progressive values of modern generations.