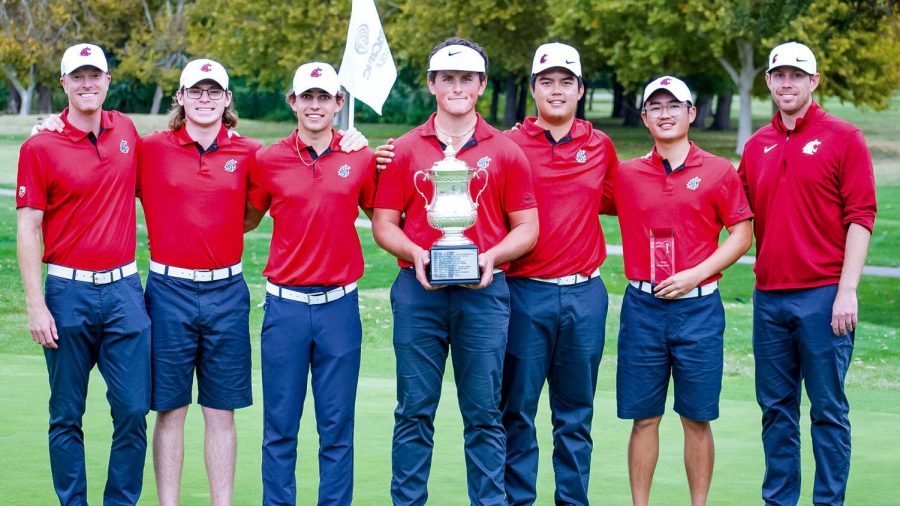 WSU men's golf won their first tournament in over three seasons with a victory at the Visit Stockton Invitational.

WSU men’s golf earned their first team victory since 2017 and the first outside of Pullman since 2014 at the Visit Stockton Invitational in Stockton, California this weekend.

The tournament started on Thursday and concluded on Saturday at the Stockton Golf and Country Club. The Country Club itself had a 6,543-yard golf course that plays as a par 71 with one 18-hole round taking place each day.

The lineup for the Cougars was redshirt senior Max Sekulic leading the Cougars and sophomore Jaden Cantafio as the number two spot. Sophomore Preston Bebich was the number three spot, while junior Pono Yanagi and freshman Franklin Lydra were the number four and five spots respectively for the Cougars. The first round started off strong for WSU as they recorded the third-lowest, single-round team score in program history by carding 16-under, 268.

Yanagi ended the tournament with a three-round score of 208 (-5) as he tied for 17th. He began the tournament carding a 6-under-par 65 in the first round, which is the seventh-lowest, single-round in program history.

Cantafio had a good tournament as well as he placed 21st, shooting a 3-over-par 74 in Saturday’s third round. He also shot a 6-under-par 65 in the second round of the tournament, which matched Yanagi for the seventh-lowest, single-round in program history. Lydra ended his tournament in a tie for the 82nd spot as he carded 14-over-par 227.

“I’m really happy for our guys,” White said. “They have been working at it and wanted to put themselves in a position to win a tournament. To handle themselves the way they did, and hit shots when we needed them most, shows a lot about their will to succeed. This is a great feeling and I’m really proud of our guys.”

The Cougars’ next tournament is Nov. 8-10 for the St. Mary’s Invitational at the Poppy Hills Golf Club in Monterey, California.