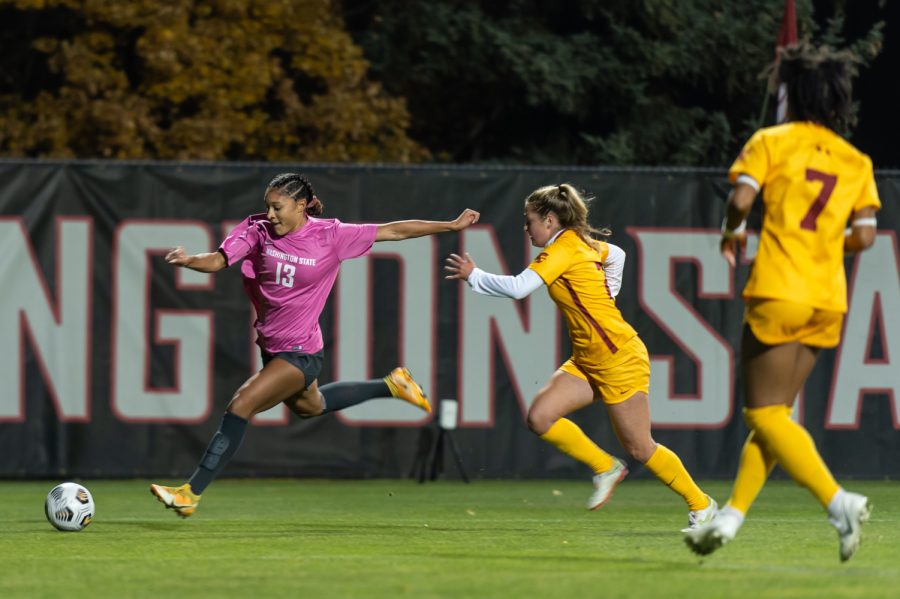 WSU forward Elyse Bennett (13) shoots on goal during a college soccer match against USC on Oct. 21, 2021, in Pullman.

This week, the Cougs welcomed two top-10 ranked teams to Pullman, earning a draw in both meetings.

On Thursday night, the Cougars played No. 5 USC and ended scoreless with neither team managing to get the ball in the net. The match against No. 8 UCLA ended in a 1-1 tie thanks to a strike by senior midfielder Sydney Studer.

With the two ties, WSU slid to fourth in the conference rankings with a 4-1-3 conference record and a 10-2-4 overall record. USC left the week undefeated in conference play. Despite outshooting the Trojans 24 to 19 and 6-to-1 in overtime, the Cougs did not manage to score a goal.

The first shot of the night came just one minute into the match when sophomore forward Margie Detrizio took control of the ball, but it was saved by senior goalkeeper Anna Smith. Shortly thereafter, junior midfielder Grayson Lynch tried to get the ball in the net but it went wide.

After that, the Trojans and the Cougs traded control of the ball again and again with neither side dominating during the first half of the match. WSU played aggressively and earned quite a few fouls in the first period of the match.

The second half of the match started with a foul and a yellow card for the Cougars with Detrizio receiving the warning. In the 49th minute, fifth-year midfielder Sydney Pulver opened up play with a shot that was saved by Smith.

The Cougars and the Trojans continued to trade the ball throughout the match without either side dominating. During the second overtime period, the Cougars hit a barrage of shots at the Trojans’ goal but none managed to hit the net and the match ended in a draw.

Finally, in the 55th minute Studer, assisted by Lynch, managed the Cougars’ first and only goal of the night.

Despite two overtime periods, neither team managed to score another goal. Both teams shot multiple times but were not successful. In the 101st minute, fifth-year forward Elyse Bennett received a yellow card. Shulenberger was happy with the tied outcomes of the matches.

“It means a lot. I mean, obviously, we would like to win both these matches because we’re competitors here. But these are some of the finest teams in America,” he said. “You got these two teams here and we held our own, we’re a good team too. Proud of the girls.”

Next up for the Cougs is a match against Oregon at 7 p.m Thursday in Eugene. The match can be viewed on the Pac-12 Network.