Cougar Food Pantry workers return the kindness they were given 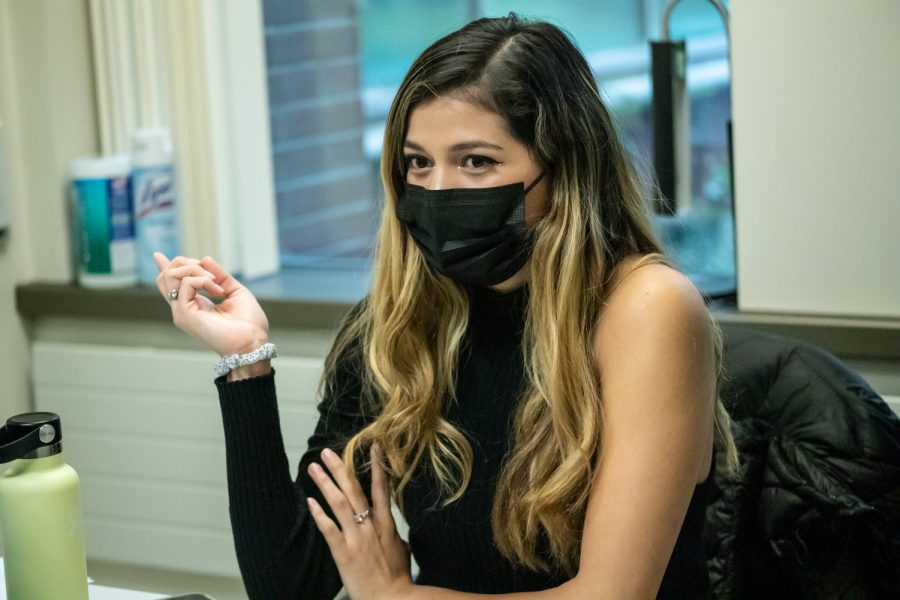 The Cougar Food Pantry has become a place for some employees to give back to their community and return the empathy they received growing up.

McCarron said they were raised by their mother. They spent time staying with friends, family and strangers, sometimes even sleeping on staircases after their parents split up. Their grandmother later moved from the Philippines to help raise them and their brother.

They often relied on services like food banks and community assistance growing up to make ends meet. This generosity was something McCarron said they always intended to give back.

“A lot of the time it was kindness of strangers that got us through that,” McCarron said.

Oftentimes, students who come to the pantry will also later bring back something of their own to donate, McCarron said.

“Seeing that roundabout of empathy growing within this university is probably the most meaningful part about all of this,” they said.

WSU alumna Cristalina Ramirez began working as a food pantry assistant last March. A capstone class for her sociology major required her to take on an internship, and her superviser at the Office of the Dean of Students recommended an AmeriCorps program held through the Office for Access and Opportunity.

The program required Ramirez to complete 300 hours of community service, which she filled out by working at the Cougar Food Pantry. She spent time doing inventory, helping with food drives and making U.S. Department of Agriculture food boxes, she said.

After graduating in May, Ramirez said she stayed on with the pantry to finish off her volunteer hours and help with the transition process of moving the Cougar Food Pantry from its small room at the Lighty Student Services Building to its current location in the Compton Union Building.

Ramirez said growing up, her mother worked in agriculture, which did not bring in a large income for her six children. Like McCarron, her family relied on food banks, food stamps, Goodwill and other resources for low-income families.

Now, Ramirez said she feels like she can give back.

“I’m happy to help other people how my family was once helped because there is a few families who come in and use the pantry, and I know they’re so grateful. And I know my mom was so grateful for those resources,” she said.

As a food pantry assistant, Ramirez spends time helping customers, taking inventory and restocking. She also does a lot of behind-the-scenes work by reaching out to suppliers like Backyard Harvest, the WSU Eggert Family Organic Farm and the Council on Aging and Human Services food bank in Colfax, and coordinating pickup or dropoff times for stock.

Ramirez said by the time she leaves her position as food pantry assistant, she wants all the technical and logistical work to be sorted out so the pantry can focus on other projects.

The pantry has plans to hold cooking classes and do other food drives, she said.

A lot of students lost their jobs during the pandemic and their income for necessities like groceries, she said. Many students who come in express their gratitude to have the pantry as a resource, even for just a snack, Ramirez said.

Ramirez said she believes the pantry is also a reassurance for parents when they visit campus. When parents see the pantry, they know their student has resources so they do not have to be hungry, Ramirez said.

WSU students voted on a referendum last spring to increase funding for the pantry by adding an extra $5 to their tuition, she said.

The pantry recently set up GivePulse where students can sign up to volunteer, Ramirez said. The rest of the semester’s volunteer slots were filled up within two days.

In the long-term, McCarron said they want the Cougar Food Pantry to become the national standard for supplying college students with nutritious food.

“So, it is possible. And that should be a bar for every other university in the U.S., or even internationally. You can’t let your best commodity starve,” they said.