Learn spooky owl facts, how to get involved in WSU Raptor Club 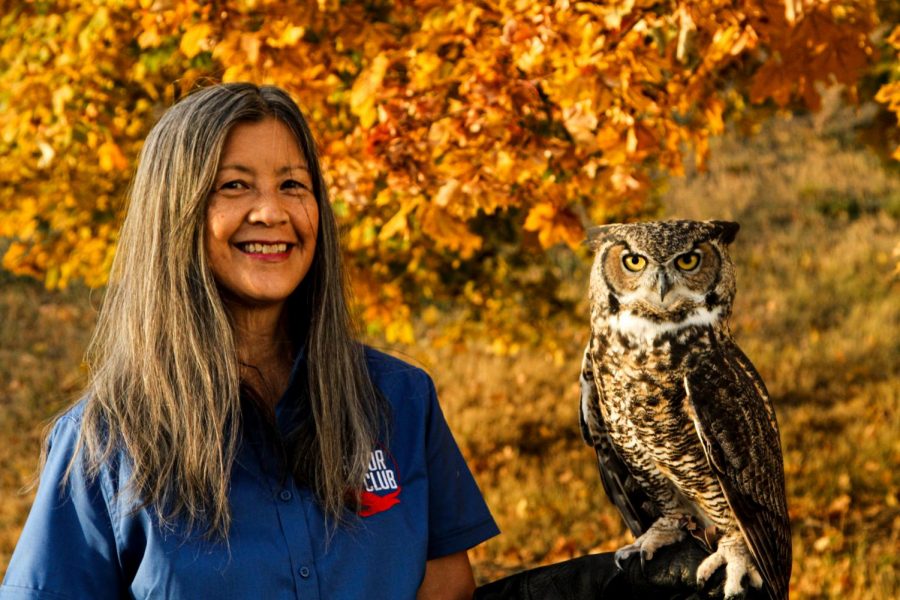 Fluffed, horn-like tufts at the ready to flare.

What kind of frightening creature is this?

The tiger of the sky, beware.

Talons flex and grip his perch,

As your heart suffers a sudden lurch.

You may fear a howl, a growl, or a beast on the prowl,

But none can compare to the great horned owl.

Owl-oween is right around the corner, and what better way to celebrate than to learn about one of WSU’s most amazing animal programs?

The WSU Raptor Club was founded in 1981, when a red-tailed hawk was hit by a car. The bird was tended to, but his left shoulder had suffered irreversible damage that prevented flight. Charlie became a resident bird at the Raptor Club and lived an uncanny 33 years, making him the oldest red-tailed hawk on record, according to the club’s website,

Raptors are carnivorous birds of prey with hooked beaks and sharp talons. Hawks, eagles, falcons and owls are all raptors.

Raptor Club was created to spread the word about these awe-inspiring birds of prey. Although the first members of the club assisted with Charlie’s rescue, Raptor Club is not involved in rehabilitation.

Rescued birds are treated through the Raptor Rehabilitation Program, according to the College of Veterinary Medicine’s website. Recovered birds are then released. If they are unable to return to the wild, they become resident birds at the Stauber Raptor Facility and are cared for by the club.

The club’s residents currently include owls, hawks, falcons and a golden eagle. Resident birds travel to events where they are an important part of the club’s education efforts.

“Our purpose is to present about raptors, their importance and raptor conservation,” Wishon said.

Presentations also detail raptor species and resident birds’ backgrounds. In a nonpandemic situation, the club provides over 100 presentations a year to schools, camps and other organizations; their presentations will not be starting again until next fall.

“I love presenting to the public,” Wishon said. “People of any age are mystified and completely enamored with what you have in front of them, and they also gain a lot of appreciation for an animal they never knew existed.”

Rose Smetana, interim fundraiser and public relations officer for the WSU Raptor Club, said she enjoys separating fact from fiction during presentations, especially when it comes to owls.

“We have seven vertebrae in our neck. Owls have 14, in an S shape, so that they can turn their whole head 270 degrees. That’s straight back and then to one shoulder, not 360 degrees,” Smetana said.

Owls have eyes so large there isn’t enough room in the skull for muscles to move them. That’s why owls evolved the eerie ability to turn their heads so far to each side.

“The other interesting fact about owls is their ears are not symmetrical; one is up and forward, the other is back and down,” Smetana said.

Asymmetrical ears, along with a spookily round face, allow owls to pinpoint the exact location of prey.

Owls may bring to mind that characteristic hoot, but most owls scream, shriek or screech. If you hear a hoot around here, the culprit is the great horned owl, Bubo virgianus. They’re the most common owl species in the Americas, living from Alaska to Brazil.

The club’s resident great horned owl, Sprite, came to the club in 2007 with an injured right wing, Smetana said.

“We’ve had him for fourteen years, and he is the main predator for other owls, as well as other prey larger than him,” Smetana said.

Smetana said the great horned owl is called the tiger of the sky because it preys on more than 250 species, including most other owls. Even with his injury, Sprite is not a bird to be underestimated.

“He can exert 400 psi [pounds per square inch]  grip in his talons, so basically he could snap a broomstick in his hand as easily as we could snap a crayon,” Smetana said.

However, Sprite has a gentler side: he serves as a role model for orphaned owlets, Smetana said.

Hannah Tarlyn, previous club president and current member, said her favorite aspect of the club is working with the birds one on one.

“To interact with a wild bird, that’s just so, so special,” Tarlyn said.

The most extraordinary thing about Raptor Club is that you need no prior experience to join. Right now handler positions are full, but general membership is open. General members participate in presentations, create enrichment items for resident raptors, attend bird-themed lectures and go on field trips.

“I came in and I had zero bird handling experience,” Wishon said.

You don’t have to be a student at WSU either. If you’re at least 18 years old and have an interest in raptors, you’re good to go.

The club’s next meeting is going to be Nov. 29 at 6 p.m. in the Animal Disease and Biotech Facility, Room 1002. Wildlife intern Dr. John Winter will be talking about avian anatomy, and there will be pizza, Wishon said.

To support the club, you can purchase merchandise or donate by sending an email to WSUraptorclub@gmail.com. To learn about raptors and the club’s resident birds, or what to do if you find an injured or sick bird, visit their website. Make a hoot on social media to spread the word!