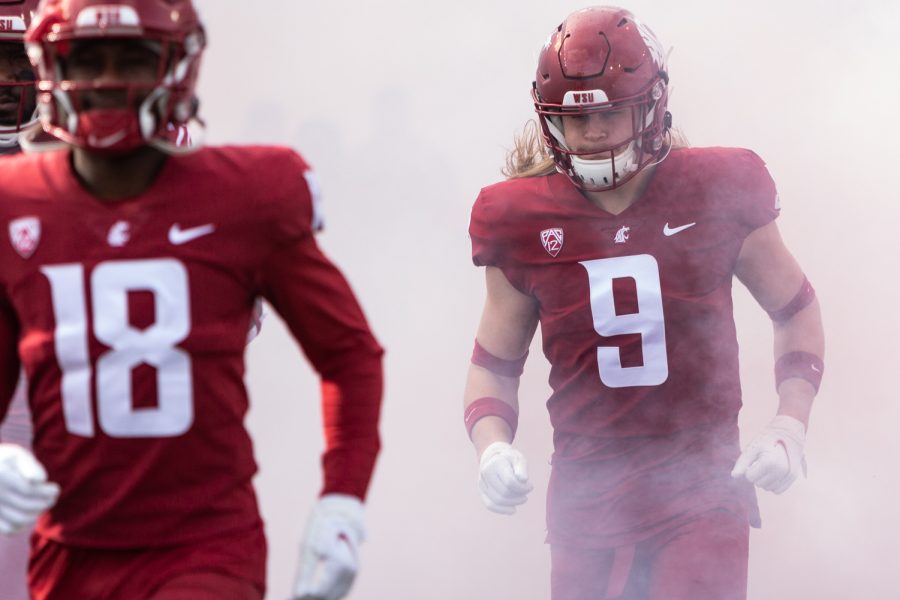 WSU linebacker Ben Wilson (9) runs out of the tunnel before a college football game on Oct. 23, at Martin Stadium in Pullman.

We enter the final weekend in October, and with about a month left in the Pac-12 regular season, the races at the top of each division heat up.

If you had told me at the beginning of the season by week nine that Oregon State would be atop of the Pac-12 North division and Washington and USC would be under .500, I would have laughed right in your face.

But that’s the Pac-12, right? Filled with unpredictability, chaos and craziness every single week of play. As we head into the home stretch, here are my Pac-12 power rankings for week nine of the regular season.

The Ducks went into Pasadena, California, and pulled off what some people call an “upset” against the Bruins, but they still look inconsistent. Oregon was not the favorite in this game, even though they are the number seven team in the country. If this team is going to be the representative in the Rose Bowl, it could be a rude awakening for Oregon.

The Sun Devils are coming off of their bye week, but they welcome the Cougars into Tempe this weekend, which could provide a challenge to a dynamic offense led by junior quarterback Jayden Daniels. The read option could be tested this weekend, especially coming off a disappointing loss to Utah in their last matchup.

This team should be ranked at this point, but nonetheless, the Beavers are now on everybody’s radar in the Pac-12 after now beating Utah, who was the last team in conference play to remain undefeated. They racked up a ton of second-half yards to climb back into this game after being down 24-14 at halftime. At the end of the day, this team knows how to win games, even with two losses to Purdue and WSU.

The Utes, even though they had a tough loss on the road at Oregon State, still looked impressive in the first half and look to be the favorite to win a very competitive Pac-12 South division. They had a clean game offensively, with no turnovers, but the second-half collapse was inevitable after giving up 260 yards on the ground to the Beavers. Utah needs to figure out their run defense if they want to keep their position in the rankings.

The Bruins had a close loss at home against Oregon, and hear me out, they are not going down two spots because of how bad the loss was; it’s just the teams above are better. No disrespect at all. Head coach Chip Kelly has still never defeated his former team while being back in the Pac-12 after leaving Oregon to go to the NFL. Offensively, they were very sloppy with three turnovers and a lack of ball security. UCLA still is one win away from becoming bowl eligible after a tough loss at home after GameDay came to Los Angeles.

Next game: 7 p.m. Saturday at Utah on ESPN

The Cougars came up a little bit short against No. 25 BYU this weekend at home, and their run defense got exposed once again. WSU could not stop the run, allowing 238 total yards on the ground. The passing game for WSU seemed to be a little bit of a struggle, with sophomore quarterback Jayden de Laura not completing a passing TD but giving senior running back Max Borghi plenty of goal-line opportunities. Interim head coach Jake Dickert just came up a bit short in his first game.

Next game: 12 p.m. Saturday at Arizona State on FS1

Stanford is coming off a bye after a last-second loss in their previous game against WSU and looks to use the run game more as they head into the latter half of the season. The Cardinal are currently ranked last in rushing yards per game on offense, using the passing game more. Stanford needs to adjust their offensive scheme if they want to climb in the Pac-12.

The Huskies almost lost to Arizona, yeah, but Arizona played Arizona football in the second half, costing them the game against Washington. For a team that was projected to be in the top half of the Pac-12, this is definitely a disappointing season for the Huskies. They could not stop the run, with Arizona getting 218 yards on the ground. Although they do have a top-two secondary in the nation, a struggling run defense will pull them in the wrong direction.

The Trojans definitely bit off more than they could chew in a road loss to No. 11 Notre Dame, racking up a bunch of penalty yards against themselves. USC could not defeat the Fighting Irish in the latest chapter of that historic rivalry. The Trojans seem to be focused on the off-season with finding a new head coach to replace Clay Helton, especially with junior quarterback Kedon Slovis struggling to get his groove back.

Next game: 4 p.m. Saturday vs. Arizona on ESPNU

In a battle at the bottom of the Pac-12, the Golden Bears held on for a very dominant win at home against Colorado, limiting them to three points. Cal’s defense only allowed 104 total yards for Colorado, which is significantly less than the total rushing and passing yards the Golden Bears racked up this past Saturday. Cal got a statement win and now have found their offense again, along with a very powerful defense.

Next game: 4 p.m. Saturday vs. Oregon State on Pac-12 Network

This has to be one of the most disappointing offensive productions I have ever seen from a team in college football. No disrespect to the Buffaloes, but 104 total yards and only three points is just bad. This offense seemed to come back alive after defeating Arizona 34-0 at home, but then they travel to Berkeley and only put up three points. Wow. This is not just bad anymore; it’s just awful. Onto next season, Colorado.

Next game: 12 p.m. Saturday at Oregon on FOX

The Wildcats almost did the impossible, nearly upsetting Washington at home after having a 16-7 lead at the end of the third quarter. But a collapse from the Arizona defense proved that the impossible was just not going to happen in Tucson. Only having a total of 62 passing yards and two bad interceptions left the Wildcats without any hope in the fourth quarter when Washington turned it up on offense. Close but not close enough continues to be the story of the 2021-22 Wildcats.

Next game: 4 p.m. Saturday at USC on ESPNU