Make a buzz to save the bees 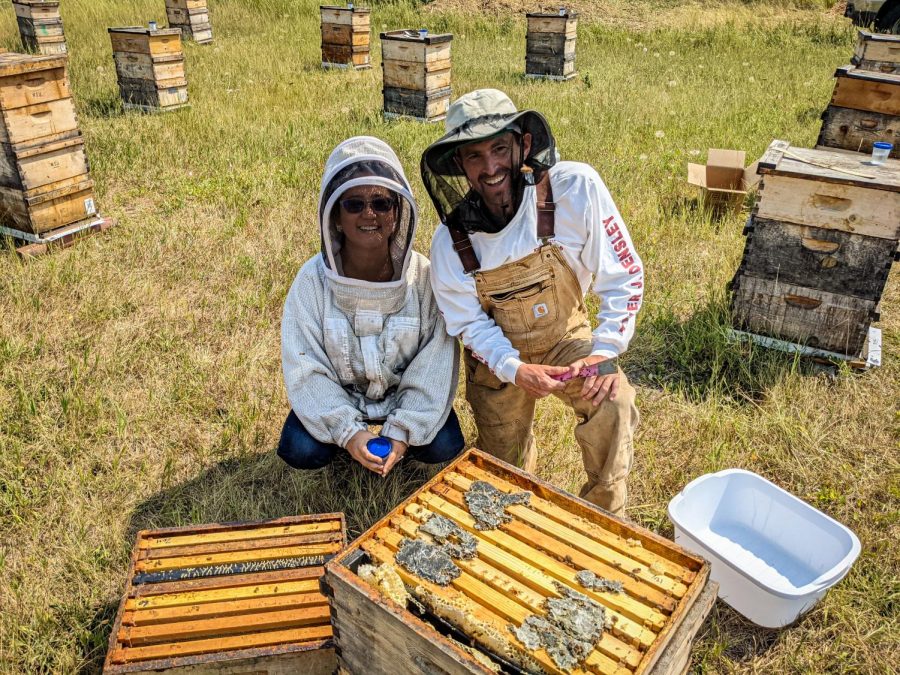 WSU Bee Program researchers are making a buzz to ensure the survival of the honey bees.

Honey bees without a honey

“No honey bees are native to North America,” Sheppard said.

To refresh the gene pool, bees must be imported. Unfortunately, European honey bee importation was banned in 1922 to prevent introducing tracheal mites into the U.S., Sheppard said.

Instead of importing live bees, bee semen was frozen through cryopreservation and imported to the U.S. to reverse genetic bottlenecks, which occur when there is too much inbreeding. WSU has a permit to import preserved European honey bee semen, he said. The imported semen diversifies honey bee genetics, increasing resistance to parasites and disease while improving overall honey bee health.

WSU-bred queen honey bees are available to commercial queen bee producers across the country. WSU is the only selective breeding program in the country collecting and using cryogenically-preserved semen, Sheppard said.

The Bee Program is combining its breeding expertise with extensive research to understand why honey bees are perishing.

“Honey bees and other pollinators have been in decline for decades now,” Bee Program researcher Nick Naeger said.

Habitat loss, pesticides and high rates of disease are all contributing to the collapse of pollinator populations, Naeger said. However, the main culprit in declining honey bee populations is the aptly named Varroa destructor, a parasitic mite.

“Varroa is currently the top health issue for honey bees,” he said. “There’s nothing else more likely to kill your colonies at this point in time.”

“One-third of our diet is dependent on insect-pollinated crops, and honey bees are the major pollinator of modern agriculture,” Sheppard said.

No need to fear, mushrooms are here!

Another portion of the Bee Program focuses on using fungi to combat varroa mites and diseases.

“People had noticed honey bees foraging in cultivated mushroom beds, and this led us to think that bees were getting something nutritional or pharmaceutical from these mushrooms,” Naeger said.

The program is partnered with a mushroom remedy company called Fungi Perfecti, which supplies fungal extracts to feed bees, he said.

“Overall, we’ve seen very good positive effects when bees are fed these fungal extracts,” he said. “It seems to help them fight microbial diseases, and it may just be helping make them healthier overall — with better nutrition and a better-balanced immune system.”

“We’ve been developing a fungal strain to be a better strain at killing varroa,” Han said.

Varroa mites were once controlled by toxic pesticides, which harmed bees and contaminated honey. But now the mites have developed resistance. Han said her Metarhizium fungus strain targets the mites specifically without the use of harsh chemicals.

Honey bees go into a dormant state during the winter and stay in their hives until temperatures rise in spring. During the winter, varroa mite populations within the hive multiply dramatically.

“The interest is whether or not high carbon dioxide levels will result in increased mite mortality — so that you could put your bees in cold storage and also control the mites,” Sheppard said.

Last March, the new WSU Honey Bee and Pollinator Research, Extension, and Education Facility opened in Othello, Washington. But equipment was transferred to the facility only recently because of shutdowns caused by the pandemic.

The Bee Program is unique because it focuses on applying its research to benefit both commercial and small-scale beekeeping communities, Bee Program researcher Brandon Hopkins said.

“This program does very well to have a boots-on-the-ground approach,” Naeger said. “When beekeepers encounter a problem, they come to us.”

The Bee Program is crucial, especially when it comes to a subspecies that agriculture depends on: the Caucasian honey bee.

“Without the WSU Bee Program, there would be no Caucasian honey bees in the U.S.,” said Adam Ware, WSU graduate student working in the Bee Program.

Thanks to the busy bees of the Bee Program, honey bees have a chance.