Day of the Dead is not Mexican Halloween 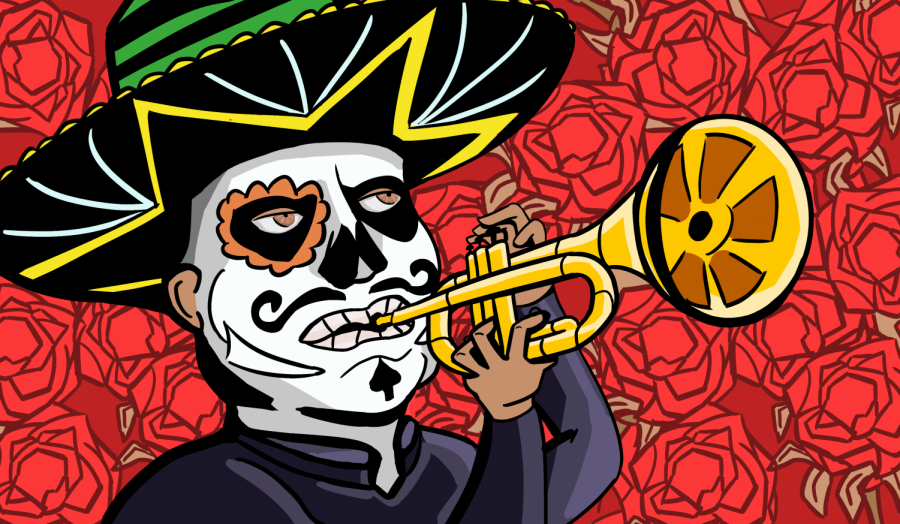 For those unfamiliar with Día de los Muertos, or Day of the Dead, it is a beautiful holiday where friends and family gather to remember and pay respects to loved ones who have passed away.

The holiday is mainly observed in Mexico and Latin American countries. However, many celebrate it here in the U.S.

Junior psychology major Antonio Fajardo said he started celebrating Day of the Dead three years ago after his grandfather passed away.

“Día de los Muertos is an opportunity to honor the lives of the people who have passed on and to celebrate that they were in our lives in the first place,” he said. “So, it felt like a great way to thank him [his grandfather] for everything that he has done for my family.”

The best aspect of the holiday is that its celebrants do not view death as terrifying as most Americans do. Instead, they view it as a cycle of life — a celebration of going somewhere new, namely the Land of the Dead.

“To us, death is not a permanent goodbye because they are always with us in a way,” said Carlos Rojo, senior political science major. “[The holiday allows us] to take power away from and almost make fun of death by dressing up and painting our faces as skulls.”

“When a loved one passes away, families here [in the U.S.] mourn them for a while and then forget about them,” he said. “But for us, we understand that he died and did good things while still alive, but we continue remembering and celebrating his life even after his death, because why should we forget about him?”

The U.S. has not fully embraced Day of the Dead, mainly because our society finds it rude and inappropriate to laugh in the face of death. And sadly, the holiday is often viewed as “Mexican Halloween,” which is the furthest thing from the truth.

Each celebration has different historical and religious roots. Halloween comes from the ancient Celtic festival Samhain, while Day of the Dead comes from the Aztecs, Toltecs and other early civilizations across Mesoamerica.

Second, Day of the Dead strictly focuses on death, as suggested by its name, while Halloween focuses on the fear of mortality and the unknown.

As the U.S. tends to bury the subject of death because it is often associated with negative emotions, Mexico and Latin American countries celebrate it by making the remaking death to be enjoyed and visible.

I do not know about you guys, but I would rather be celebrated and remembered instead of mourned and forgotten. So maybe the U.S. should take notes and try to merge their views and traditions regarding death into our society.

The U.S. should also try to incorporate the holiday into our society. In order to do that, though, our society must be educated on what Day of the Dead actually means.

If you do not know where to start your education, I suggest watching the movie “Coco.” The interviewees thought it was an outstanding representation of the holiday.

“My family really loved and connected with it,” Rojo said. “My stepfather, who is a big guy that never shows emotion, had tears in his eyes — that is how much it got to him.”

Similarly, Fajardo said he had tears streaming down his eyes at the end of the movie.

“We get little representation in Hollywood, so it felt really special watching ‘Coco’ because I could see my family and friends’ traditions,” he said.

I also suggest attending the Day of the Dead celebration that MEChA (Movimiento Estudiantil Chicanx de Aztlán) — a student organization that seeks to empower the Chicano/a community through political activism and education — is putting on 5 p.m. Nov. 1 at the Ensminger Pavilion.

The interviewees (the organizers of the event) encourage everyone to stop by and bring a photo of a loved one who has passed away, so they can be honored throughout the night. In addition, there will be food, activities, music and entertainment to celebrate their legacies.

“Even if you don’t know anything about Día de los Muertos, come to the event,” Sotelo said. “We are really welcoming and accept anybody who is looking to learn more about Hispanic culture and traditions.”