Undocumented Initiatives Center is open to all regardless of citizenship status 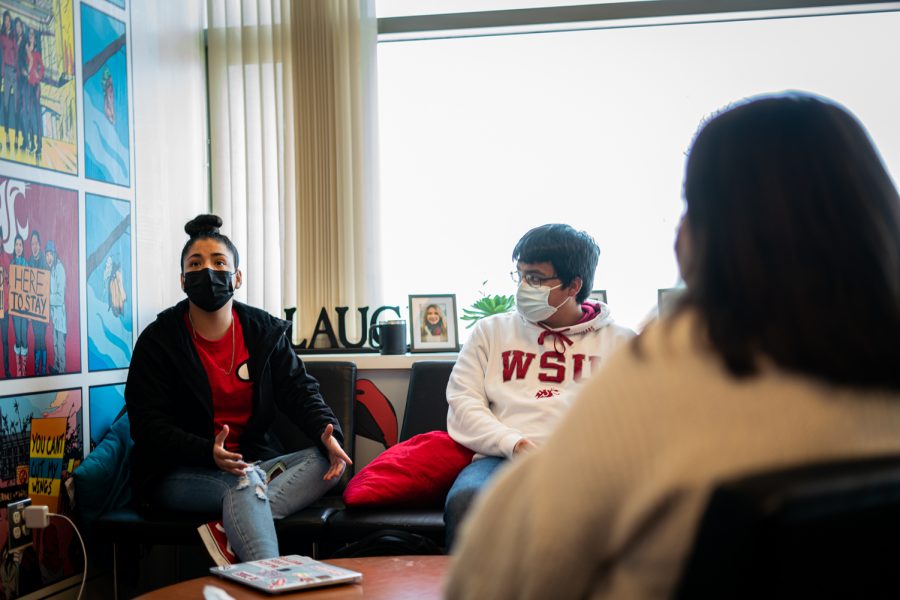 Gabby Rodriguez-Garcilazo speaks about what the Undocumented Initiatives Program means to her on Monday in the CUB.

The Undocumented Student Center helps create a sense of community among students, regardless of their citizenship status.

The center, located in room 421 of the CUB, provides a space for students to meet and interact with others who have similar backgrounds. The center has been operational for a few years but has only occupied its own space in the building since Oct. 14.

“I’m mostly in charge of helping out people at the organization,” Barragan said.

She said the atmosphere at the center is meant to be a place for students to relax with others.

Barragan said the people who run the center help many undocumented students because they recognize the difficulty of being undocumented in America.

“It’s hard for a lot of people to adjust to going to college, especially when they’re a minority or a first-generation college student,” she said. “So we’re trying to help them.”

Barragan leads Mariposas Poderosas’ regular meetings at 6 p.m. every Thursday in the center. These meetings are mostly meant to be helpful check-ups for the students. They focus on helping students’ mental health.

“We sort of ask how everyone’s doing and how their week has been and things like that,” she said.

Barragan said the organization also helps students with financial assistance, such as getting loans and scholarships.

“Someone can come up to me and say, ‘Hey, my financial aid didn’t go through,’ and we can help them with that,” Barragan said.

Barragan wanted to do something for the community when entering college but was not sure what to do. She was highly inspired to join the organization after meeting program director Marcela Pattinson.

“[Pattinson] just had so much energy for the organization,” Barragan said. “I was a little nervous when entering college, but her and this place just made me feel more comfortable here.”

Gabby Rodriguez-Garcilazo, junior criminal justice and sociology double major as well as treasurer for Mariposas Undocumented Alliance and ASWSU senator, said the center made her life at WSU better.

She said she was torn between going to WSU or Seattle Pacific University, but she was convinced to join WSU because of Pattinson.

“What really sold me on WSU was [Pattinson],” Rogriguez-Garcilazo said. “She was energetic and showed us around the fourth floor, and she was better than any tour guide.”

Barragan said the center and its people convinced her to remain in school and not drop out — she may have done so without it.

Cristopher Reyes, junior accounting major and Mariposas Undocumented Alliance member, said he formed a connection with others at the organization early on after meeting Pattinson. He would seek help from the people there himself.

“Through [Pattinson], I was able to get out of my dorm and rent an apartment,” Reyes said. “So she was really able to help me a lot when I came here.”

Reyes said he learned about the organization during Alive Orientation and felt like he had to be there to help people like him.

Barragan said any students are welcome at the center regardless of documentation status.

“Anybody can come in and just meet people or just work on something,” Rodriguez-Garcilazo said.

More information about the center is availabe on its website.

Editor’s Note: This article has been edited to correct titles and spellings of names.