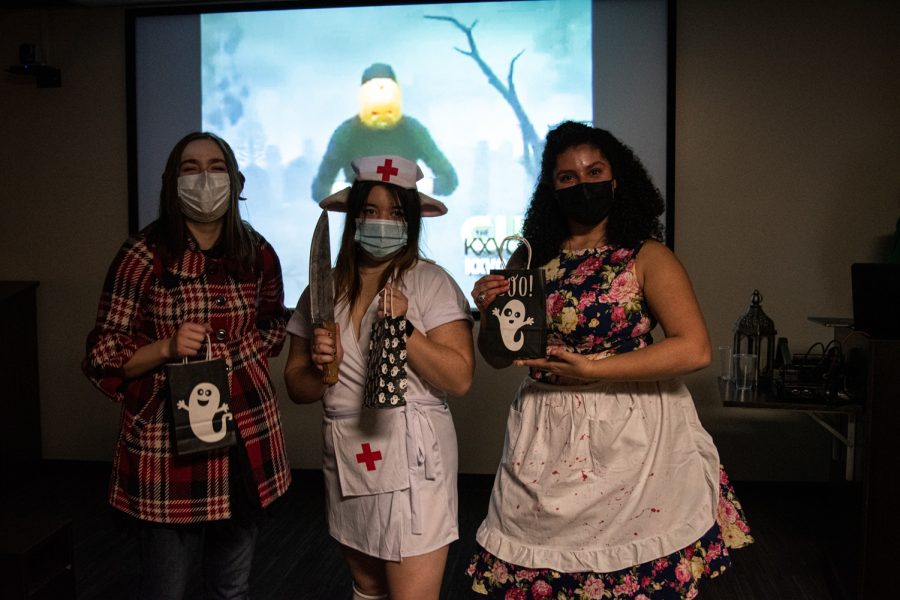 As the night slowly crept in and the wind blew around orange and brown leaves, a soft glow radiated from the Avery Hall’s Bundy Reading Room. Laughs and excitement could be seen through the windows as last-minute decor was placed and costumes fixed to perfection.

On Oct. 28, fairies, monsters, folklore and more filed in one by one to share scary stories and enjoy a night with other students at the LandEscapes Halloween event, SpookyEscapes.

With an abundance of energy, every person who walked through the entrance was greeted with kind and welcoming words from LandEscapes Managing Editor Noelle Niemeier. Snacks could be found in the room to the right, complete with light-hearted chatter and people in costumes ranging from an “Attack on Titan” Scout, to a knife-wielding sheep dressed as a nurse.

The night consisted of storytelling around a “fireplace,” Mad Libs that took some crazy turns, some jumpscare videos that left many with heart palpitations and a costume contest that showed off creativity to the max.

When the open mic kicked off, the mood was set with a virtual fireplace behind the stage and every audience member filled with anticipation.

As the night went on and speakers took their turns, each story added unique suspense to the atmosphere. Short and fast stories were fired off person after person leaving the audience’s hearts racing. In contrast, the longer and slower stories left the audience on the edge of their seat waiting for the next thrill.

A member of the audience, Izabella Meza, sophomore political science major, concocted a story while intently listening to others read. On her turn, she waltzed up to the front and began telling the story of her costume.

Meza was dressed in a 1950s high neck floral dress with no sleeves and a white half body apron stained with fake blood. As Meza set the scene of her scary housewife story, she hid her final prop behind her back, building suspense toward the climax of her story.

Near the conclusion of the story, she pulled out a frying pan from behind her back, mimicking the story’s character. In the end, the housewife (Meza) got revenge on her husband for cheating and removed him from the picture with her trusty frying pan.

“I went the stereotypical route but [made] it dark,” Meza said. “I’ve always wanted to put this ensemble together. I’ve had this dress for a while, and I was like, I’m finally gonna put it into action this year …  and I was like okay, uhhh what’s my murder weapon? This pan.”

The story left a memorable impression on the audience. Meza came in first place for the costume contest that concluded the SpookyEscapes event.

The costume contest had over half of the individuals at the event participate. The top three contestants were voted on through a QR code poll and won Amazon gift cards. Second place went to the LandEscapes Fiction Editor Donata Tran. She was dressed as a nurse sheep with a knife, which was an ode to a popular post on Tumblr.

“It’s a lot of fun hearing all the stories that people have, especially the original works,” Tran said. “It’s just nice to go to an event after a year and a half of being inside and get to dress up and have fun with it feeling normal again.”

SpookyEscapes will return next fall with plenty in store. LandEscapes also plans to host more events similar to this one in the future, alongside their usual literary arts talks as in-person gatherings continue to pick back up.

“It feels more real this semester,” LandEscapes Editor-in-Chief Allyson Pang said. “Last year was fun, but being in person was so much more enjoyable.”

Pang said they are planning for their spring release party, which should have a similar atmosphere and a welcoming “for anyone” feel. Submissions for the LandEscapes Literary Arts Spring Journal are due Dec. 31, and questions should be sent to the LandEscapes email [email protected].