With plethora of head coaching candidates, five stand out among the rest 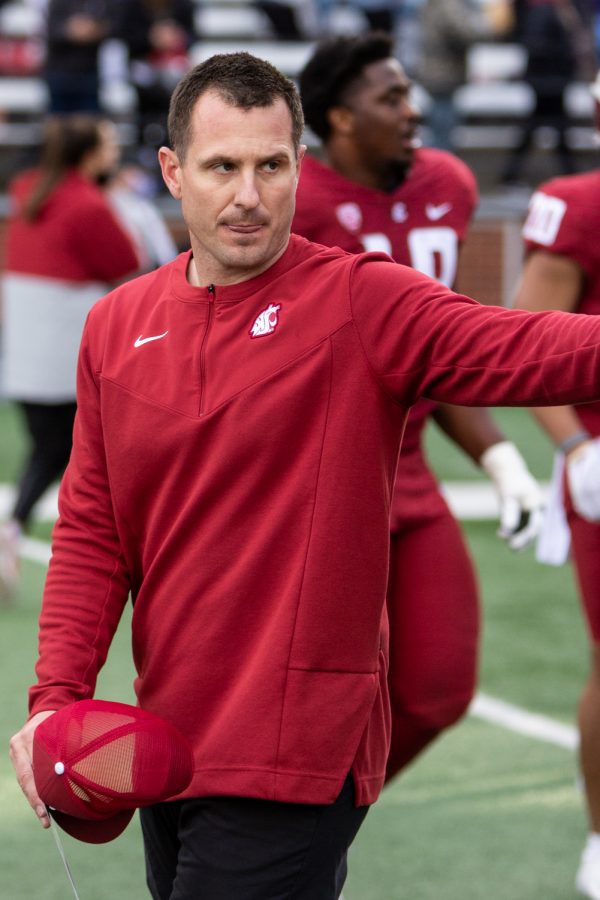 With no game to preview this weekend, now seems like a perfect time to take a look forward a few months into what will likely be the biggest WSU story of the offseason: the vacant head coaching position.

The job opened up on Oct. 18 when former head coach Nick Rolovich was relieved of his duties for failing to meet the state’s vaccine mandate.

Anytime the top job at a power five program opens up, there are going to be many candidates vying for the position. The WSU job is no different, especially with the talent currently on the team and the Cougars still in the hunt for a conference championship.

Most football fans probably have their dream list of candidates for their favorite team’s job: Nick Saban, Bill Belichick, Kirby Smart, etc. But for this, I will stick with coaches who are a little more likely to leave their current position at the end of the season.

The very top coach on my list is none other than Jeff Banks, who currently serves as Texas’ special teams, tight ends and assistant head coach. Banks is a WSU alum, having played two seasons with the Cougs. His final season, 1997, saw Banks set the eighth-best single-season punting average in school history. This performance earned him second-team all-conference honors.

Banks would spend an additional two seasons in Pullman, serving as a graduate assistant and kicking coach. He would bounce around programs after that, making stops at Idaho State, UTEP, Texas A&M and Alabama. While at Alabama, Banks became regarded as one of the nation’s top recruiting assistant coaches. He also won the 2020 National Championship during his tenure.

After the 2020 season, Banks moved with Steve Sarkisian from Tuscaloosa to Austin to take his current job. This offseason, there will likely be a lot of talk about where Banks is moving, despite a current controversy involving his new girlfriend, a monkey and some trick or treaters.

The controversy might make the WSU administration a bit hesitant to make the hire, but the Cougs should try to get Banks.

Up next is the youngest candidate on the list. My second pick has no connection to WSU or the Pacific Northwest for that matter. The 35-year-old Georgia defensive coordinator has been an underdog his whole career and has somehow turned that into leading the best defense in the nation as one of the younger coordinators in college football.

Dan Lanning grew up in Missouri and played Division-II football in his home state. He would go on to be an assistant coach for a high school team, Pittsburgh, Arizona State, Sam Houston State, Alabama and Memphis before making it to his current program.

When he arrived at Georgia in 2018, Lanning was only serving as the outside linebackers coach. When Mel Tucker (another coach I would love to have but do not think there is a chance of securing) left the defensive coordinator at the end of the season, Lanning was promoted to the defensive coordinator position while retaining his outside linebacker duties.

Lanning is not considered an elite recruiter like Banks, but he still does very well. His recruiting grade would instantly be the highest on the Cougar staff and the 18th best in the conference. Recruiting to Georgia is very different than recruiting to Pullman, but having the pedigree and experience of winning football will go a long way, especially if he walks away from this season with a championship ring.

This season, Lanning’s defense is one of the most dominant units in college football and has carried the Bulldogs to the No. 1 spot in the rankings. He is primed for a head coaching job in the next offseason or two.

At the No. 3 spot, we have current interim head coach Jake Dickert. I will be honest. Dickert has impressed me a lot so far. In his talks with the media, in the way the team has rallied around him and in the team’s performance on the field, Dickert has me sitting firmly in his cheering section.

Before his first game in charge, I had Dickert ranked as my fifth-best candidate. After the Cougars’ impressive victory over Arizona State, he has jumped an additional two spots.

Dickert has shown an ability to rally the troops and get big wins when needed. Despite falling to BYU in his debut, the Cougs stepped up to the plate when conference play came around and delivered a crucial win to stay in the hunt for the Pac-12 title.

A lot of WSU’s successes this season have come when the defense has been strong and that Arizona State game was their strongest performance. If Dickert can continue to lead that unit to success, this team could be a threat to other conference teams down the stretch.

Fourth on the list is a name familiar to many WSU fans. Alex Grinch is currently the defensive coordinator and safeties coach at Oklahoma.

Grinch has had numerous landing spots on his coaching journey so far but had his first coordinator experience in Pullman as the defensive coordinator and secondary coach from 2015 to 2017. After that, he coached at Ohio State for a season before leaving for his current post.

After former head coach Mike Leach left, Grinch was among the names to be linked to WSU as a potential new coach. Nothing ever came of it, though, as Grinch reportedly turned down a chance to interview for the job. Could the school that gave him his start as a coordinator be his first head coaching gig as well? Only time will tell, but Grinch’s defenses have been solid everywhere he has been. And defense wins championships.

The fifth and final coach on this list is a name that many Coug fans will recognize but for a bad reason this time. On Sept. 4, Utah State came to town to open their season with an upset win over the Cougars. Their coach, Blake Anderson, could be an ideal fit for the WSU job.

Anderson has seen good results during his time as a head coach. For more than two decades, he served as an assistant coach for various programs. That all changed on Dec. 19, 2013, when Arkansas State announced Anderson as their new head coach.

Since joining Utah State this past offseason, the Aggies have gone 6-2, only losing to a ranked BYU team and Boise State. Utah State currently sits on top of their division with a good chance to finish with just those two losses.

Before leaving the Red Wolves, it was thought that Anderson would make the jump up to the power five-level, but the move to Utah State has largely been viewed as a lateral move. Now with the position open, Anderson could be a very viable candidate for the top job of the program on the wrong end of the biggest upset of Anderson’s career.