WSU looks for first win on road against Washington since 2015 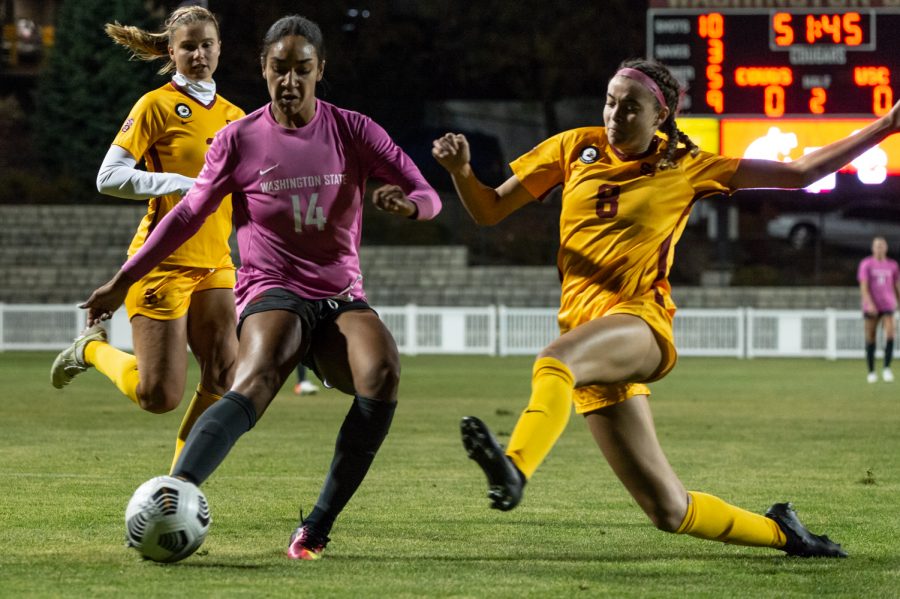 WSU soccer is headed to Seattle to close out the regular season with an Apple Cup showdown against cross-state rival Washington.

WSU is currently ranked third in the Pac-12, and Washington is ranked fifth. WSU has a winning 14-10-7 record all-time against Washington. In their last ten matchups, the two have gone 5-2-3.

In their last match in April, the two ended in a scoreless tie at the Lower Soccer Field in Pullman. During the match, goalkeeper Marissa Zucchetto turned away a career-high 13 shots. The Cougars managed to get behind the Huskies backline on multiple occasions only to fall short on their final touch.

The Huskies’ last match was a dominant 3-1 win over Oregon. Senior forward Summer Yates scored the match-winner for the Huskies in the beginning of the second half of play. In that match, fifth-year midfielder Olivia Van der Jagt set the mark for the most matches played in program history with her 87th contest.

Before that, Van der Jagt scored the match-winning goal against Oregon State in the 79th minute. During the match, fifth-year goalkeeper Olivia Sekany saved seven shots. UW ended the match with 23 shots and nine shots on frame.

Before their journey to Oregon, the Huskies visited Los Angeles to play against USC and UCLA. Washington lost to UCLA 1-3 and tied USC 2-2. Junior forward Kyla Ferry and McKenzie Weinert scored goals during the match against USC.  Yates assisted during both goals.

Fifth-year forward Elyse Bennett was named to the College Soccer News National Team of the week. Pulver was named Pac-12 defensive player of the week for the second time this season.

For the first time this season, WSU was ranked in the United Soccer Coaches poll at No. 18.  The Cougars are on the verge of potentially earning a bid to the NCAA tournament.

Do not miss out on the Cougar action. The match can be seen live on the Pac-12 Network.