Your mom away from mom

Your Other Mother cooks homemade meals for WSU students, takes them to doctor’s appointments 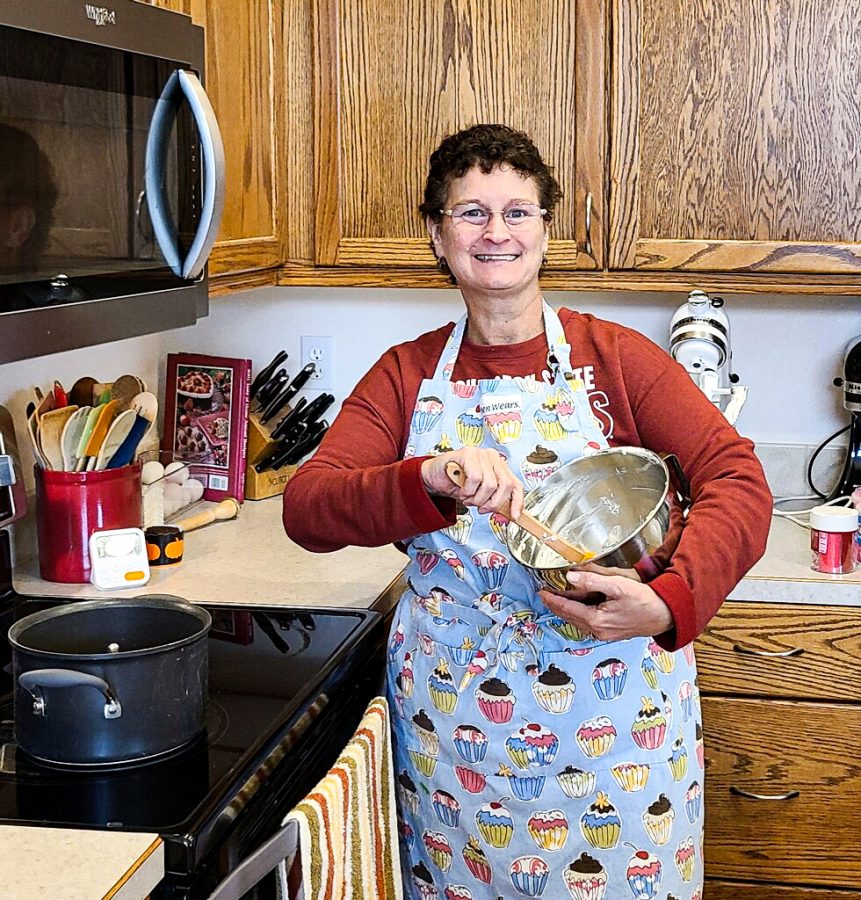 Kristy Tenwick Szablya, founder of Your Other Mother, prepares the batter for a meal before delivering the finished product to WSU students.

Pullman resident Szablya started delivering meals and holiday baskets to WSU students four years ago. When WSU parents on a Facebook page asked if anyone could deliver soup to their sick children, Szablya volunteered, launching her business Your Other Mother.

“I make really good chicken soup. I don’t know what it is, but it’s very healing,” Szablya said. “Lots of people get better after that.”

If students are far away from their families and crave a home-cooked meal, Szablya serves as their mother figure away from home.

Parents can order dinner, desserts and birthday baskets for their students on Szablya’s website. Szablya also takes students to doctor’s appointments and offers to pick up their prescriptions.

Szablya’s birthday baskets are custom-made for each student, and she accommodates each student’s dietary restrictions. Szablya filled this year’s Halloween Boo Buckets with loaves of gluten-free and vegan pumpkin bread alongside miniature pumpkins and candy.

Parent Melia Martin lives six hours away in Tigard, Oregon, and is grateful that Szablya accommodates students like her daughter Gracie who has celiac disease.

Melia wanted to send cookies to her daughter about a month ago when Gracie had a rough week of exams. Melia said she was not able to use Pullman delivery services because Gracie cannot eat anything that is made in the same space as items with gluten, so she reached out to Your Other Mother.

To accommodate Gracie, Szablya made sure her cookies were gluten-free and even bought new utensils that had never touched gluten.

“Pullman is so isolated, and that was one of the biggest fears I had sending my daughter there,” Melia said. “If something happens, what do we do? Just knowing Kristy’s available for that helps me sleep at night.”

Szablya makes every meal herself on top of creating menus, purchasing ingredients and packaging the food.

Szablya said she also expanded the business to include “helpers.” She chose to hire WSU students in particular because they are the inspiration behind Your Other Mother.

“It’s rewarding to see that others are scattering kindness because of what I’ve done. It doesn’t get better than that,” Szablya said.

Kennedy said Your Other Mother is great for students who are struggling with the transition from high school to college without a mother figure nearby. She said working with Szablya is the most rewarding aspect of the job.

“She’ll sit there and talk to students for hours because she just loves being a part of the community,” Kennedy said.

Providing comfort is a core value of Your Other Mother. Szablya lends a shoulder to cry on when she delivers break-up packages of cookies and after taking students to tough doctor’s appointments.

When doctors gave a particular student a scary diagnosis, Szablya provided distraction and comfort by taking the student to see a llama near her dad’s farm and bringing the student to her house for home-cooked lasagna.

“I hope it eases some of the sadness,” Szablya said. “I’ll just talk to them about it and kind of be the mom that they need at the time.”

Szablya said her ability to provide a support system for community members extends to her other businesses as well. She owns Moscow-Pullman Bedfinders and has been a doula for over 20 years.

“It’s how I want to live my life,” Szablya said. “I think it’s the best way to spread happiness: to be kind and helpful.”