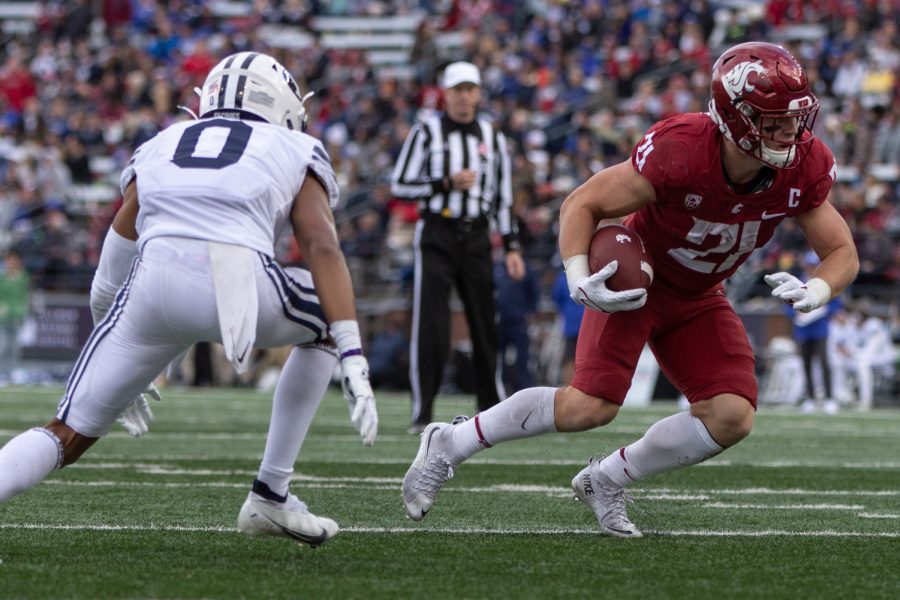 WSU running back Max Borghi (21) evades BYU defensive back Jakob Robinson (0) during the second half of a college football game on Oct. 23, 2021, at Martin Stadium.

The Pac-12 Conference never disappoints me. We enter the final month of the regular season, and it is now crunch time for these teams like USC, Washington and WSU to become bowl eligible.

Somehow after a 1-3 start to the season, the Cougars now sit a half-game out of first place. The fall of Oregon State seems to be imminent, and Arizona is still winless.

The conference always seems to be very unpredictable; I have said it before, but this is definitely the wackiest season to date.

Here are my power rankings for the Pac-12 heading into November.

The Ducks did themselves no favors beating up on a struggling Colorado team with a struggling offense and a defense that cannot compensate for the lack of offense. Oregon put up a very impressive stat line, with over 250 yards on the ground and over 300 in the air. The Ducks did give up 341 total yards to an offense that usually averages 250. The Ducks need to fix their secondary to stay at the top.

Next game: 4:30 p.m. Saturday at Washington on ABC

In a crazy south division, Utah remains solely on top, in control of all tiebreaker situations after beating both Arizona State and UCLA now. The Utes now have control of their own destiny in the Pac-12 South division. Utah put up big numbers against the Bruins at home, with almost 300 rushing yards. 160 of those 290 rushing yards came from sophomore running back Tavion Thomas, who also had four rushing touchdowns. The Utes are an amazing story on and off the field this season.

Is it biased? Maybe. Is it justified? Of course. The Cougars forced five turnovers against an Arizona State team where the Sun Devils were heavy favorites to win by 16.5 points in the game. WSU, at one point, had a 34-7 lead, commanded by the absolute dominance of defense, getting to junior quarterback Jayden Daniels. WSU has now won four of their last five games after starting the season 1-3 with losses to a good USC team, a bad loss against Utah State and a fourth-quarter meltdown against Utah. This team now sits one win away from bowl eligibility.

The Beavers fell into their trap game, playing down to their competition and ended up losing on the road against Cal. Oregon State feeds on their run offense, which is the best in the Pac-12, and the Beavers seemed to not be able to get their feet moving, only rushing for 134 total yards. Oregon State forced redshirt sophomore quarterback Chance Nolan to throw the ball and had two interceptions in the game. Oregon State is trending in the wrong direction, now losing two of their last three games and still looking to become bowl eligible.

Next game: 4 p.m. Saturday at Colorado on Pac-12 Network

Wow. Before their bye week, Arizona State blew a 21-7 lead at Utah and lost 35-21, allowing the Utes to score 28 second-half points. Saturday, the offense could not get anything moving, and just like, the Cougars are up 28-0 in Tempe. The Sun Devils just seem to disappear after their crushing loss on the road and a butt-kicking at home. Arizona State looked to be in contention for the south division, but in their last two games, they have looked more like Arizona than Arizona State football.

The Bruins needed a solid bounce-back win after coming up just a little bit short against Oregon the previous week, and instead of a solid bounce-back win, they instead got beat down on the road. Yes, UCLA did not have their senior star quarterback Dorian Thompson-Robinson, but with the backup on the field, redshirt freshman Ethan Garbers, the UCLA offense could not execute like normal. The Bruins need to hope DTR will be okay and will be able to come back soon if they want to compete for the south division.

The Huskies escaped Palo Alto, California, with a last-second touchdown to take down the Cardinal on the road; why am I still not convinced? The offense for the Huskies, at this point, seems to be very flat. If the run game is stopped, Washington has to rely on redshirt freshman quarterback Dylan Morris to get the job done, who has not been the most reliable coming in clutch for the Huskies. A close win should bring some momentum into Seattle as they welcome their biggest opponent this season.

The Trojans only beat Arizona at home by seven, and honestly, that is more of a loss than a win in my opinion. No disrespect to Arizona. USC did, unfortunately, lose senior wide receiver Drake London with an ankle injury for the rest of the season, but with help from senior running back Keaontay Ingram rushing for 204 yards, the Trojans still have an offense, despite their main target going down. The biggest problem for this team has to be their defense, allowing Arizona to put up 34 points at home is a big red flag to come.

Next game: 7:30 p.m. Saturday at Arizona State on ESPN

Wow. Two back-to-back losses in Stanford’s favor with less than two minutes to go, and they now lose three straight games. Their win against Oregon is looking more and more like a fluke now, and after being 2-1 in the conference and near the top, they sit at the bottom of the Pac-12 North division. The Cardinal need to figure out how to get out of this losing spell if they want to be bowl eligible and make Oregon’s loss against them look decent.

Do not get me wrong, I wanted to move the Golden Bears up a spot after a dominating performance at home against Oregon State. Cal played great football against a now dominant run-game in not only the Pac-12 but the country as well. Cal limiting the Beavers’ run offense to 134 yards proved to be the difference-maker. This team always plays close to their competition but just ends up on the wrong side of the scoreboard on most occasions.

For what it is worth, traveling to Autzen Stadium to play the seventh-best team in the country is not easy, but the Buffaloes actually looked to have a competent offense against a Pac-12 opponent for the second time this year. Their passing offense seemed to be good, their run game was moving slowly but surely, but the defense just could not contain Oregon’s high octane offensive scheme. Even though it is a loss, it is an impressive loss for a team struggling to find the endzone all season.

Next game: 4 p.m. Saturday vs. Oregon State on Pac-12 Network

Just like Colorado’s case, Arizona’s loss to USC was an impressive loss and kept it very competitive and close all game against the Trojans. The Wildcats put up 34 points against a struggling USC defense. It is been one of those years for Arizona, where they lose everything and can not find their sense of drive this season. They play hard, though. But it is the same thing every week with this team. Just wait until next season.

Next game: 12 p.m. Saturday vs. California on Pac-12 Network