Milo Edwards does work with homeless youth, wants to continue educating himself, others 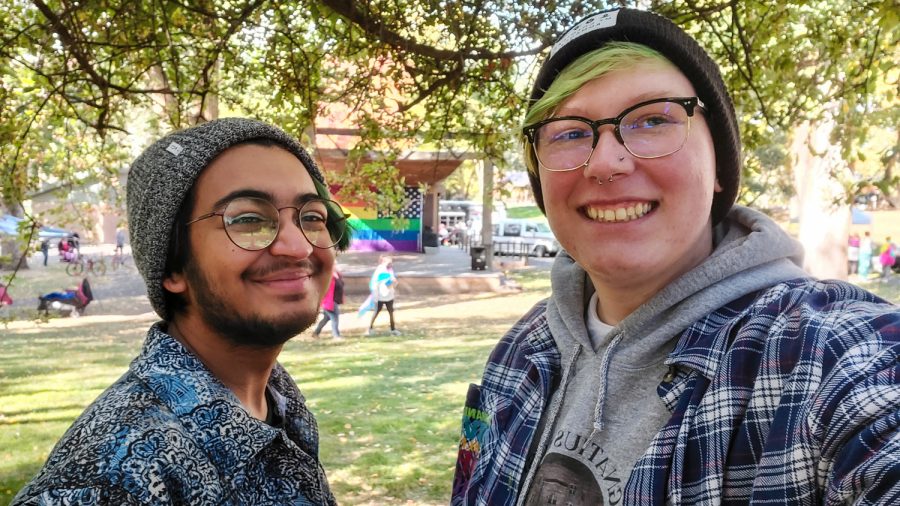 For WSU sophomore Milo Edwards, coming out as transgender in high school in a conservative North Idaho town meant losing friends, family and a home.

However, Edwards said something that started off badly led to many positive opportunities, such as helping people in the LGBTQ community who struggled with identity like he did.

“I sometimes say I’ve been every letter of the acronym,” he said. “When I first started realizing something was off, I didn’t really have the words to put how I was feeling.”

Edwards said he was not exposed to older queer people growing up; when he wanted to dress more masculine, he thought his only option was to identify as lesbian.

For about nine months, he said he thought he was lesbian. Eventually, he learned what it meant to be transgender or nonbinary.

“I identified as nonbinary for a little while and eventually came out as a trans man when I was 16,” Edwards said.

Initially, he told his close friends, which he said went well. A little while later, he came out to his mom and two brothers.

Edwards said he went to high school with one of his brothers, who was unaware he wanted to keep it quiet and ended up telling the rest of the school.

The school was small, and there was a lot of tension after word got around he was transgender, he said. People started acting hostile toward him, and someone even carved a slur into his locker.

“I had to stop going there after my junior year because it got dangerous to go,” Edwards said.

Even though the majority of people at the school did not accept him, he said two staff members supported his identity and used his name and pronouns.

“[They] were my band teacher and the school janitor,” he said. “They were both really cool, and I’m still appreciative [of] them.”

Edwards said he lost a few friends after coming out; he thinks his friends walking away from their friendship was a result of their parents influencing them and their beliefs.

He said it was hard to lose friends because of his identity, but he has been able to meet people who do accept him.

Along with friends from school, Edwards said his family rejected him; he became homeless after his junior year of high school.

He left his hometown and went to the Spokane area, he said.

“I was able to be myself more,” Edwards said. “In Idaho, there’s not really any antidiscrimination laws.”

Spokane had more community spaces for people in the LGBTQ community, he said.

Edwards said he attended punk shows, and he saw the venue held drag shows as well. He signed up for a talent competition, and he ended up winning an award. After the competition, he continued to go back and perform in drag.

“I was able to get a really good sense of community,” Edwards said. “It was like a little family almost.”

He mostly performed as a drag king, he said. The venue shut down because of the COVID-19 pandemic but he has been able to perform with a drag group based out of Moscow after he moved to Pullman.

Edwards now performs with Tabikat Productions, and Edwards said it is nice being able to perform again after the pandemic.

He said he has been performing in drag for three and a half years.

“It’s definitely been really fun for me because usually I’m more introverted,” he said. “When I’m in drag, I’m able to express myself a lot more … It’s helped me build a lot of community.”

Edwards said when he lived in Idaho, he always had to walk on eggshells because it was not safe for him to express his true identity.

Moving away and attending WSU has been better because he does not have to worry about hiding who he is, Edwards said.

“Just being able to make lots of friends who are also in the LGBTQ community and getting to do drag and going to events has definitely been really good,” he said.

Edwards said he is trying to do more advocacy work for young queer and trans people who are living in areas where they cannot express themselves because it can be scary for someone to live in an environment where they have to hide their identity.

He said he works as a youth advocacy specialist through a drop-in center called Youth Emergency Services.

His work at the drop-in center focuses on youth homelessness prevention, he said. He does a lot of consultation work with government agencies such as the Office of Homeless Youth.

Edwards said he has been able to train people on how to work with transgender clients, how to be a better ally and how to make the community safer.

Lately, he has been helping run trainings for service providers who help provide housing or medical care, or people in social care; he helps train them on how to better provide care for young queer people.

Edwards said he started doing this kind of work while he was homeless.

“It just snowballed in a good way, to the point where if it weren’t for being able to be involved with that, I don’t know if I would have been able to ever get into college,” he said. “Now I’m able to still have that job while going to school.”

Edwards said he is pursuing a major in gender and sexuality studies with a minor in at-risk youth, which will allow him to continue with his job when he graduates.

“My goal is hopefully work at one of the agencies that directly help young people and just continue with youth homelessness prevention with a focus on helping queer young people and those who are from smaller rural areas,” he said.

Not only has having been homeless led him to his job field, but it also led him into college, he said. He was able to receive scholarships and help from the Free Application for Federal Student Aid after receiving services while homeless.

October was LGBTQ History Month, and Edwards said it has a certain significance to him because he studies a lot about the community’s history. Without the month, he would not have been educated enough to find his true identity.

“When I first came out, I didn’t really know a lot,” he said. “When I saw stuff on social media, I got to learn a lot more on my own about the community before I even really started to come out.”

Edwards said the month helps bring awareness to the community and helps a lot of people understand the history better, which is important because it is not taught as much in schools.

“I like that it gives an opportunity and a platform to be able to discuss the history of it,” he said.

Edwards said he is the liaison for the Gender and Sexuality Alliance at WSU, and the organization meets every Tuesday to do different presentations.

GIESORC also co-hosted a drag cabaret with Inland Oasis, a local nonprofit organization that focuses on the LGBTQ community, he said.

They also celebrated National Coming Out Day on Oct. 11 by putting a small ad during the halftime show at the football game against BYU, Jeffries said. National Pronoun Day was on Oct. 20, and students attended webinars to learn and celebrate on the 18th and 19th.

“We use October as kind of our pride month to some extent because nobody’s really here in June,” he said. “It’s way more fun to do it when there’s people around.”

The GIESORC staff is working on holding more events in the future to celebrate LGBTQ history and educate people about the community as well, Jeffries said.

He enjoys being able to see people come together and build relationships through similar experiences, he said.

Editor’s note: This article has been updated to correct a hyperlink for the Office of Homeless Youth.