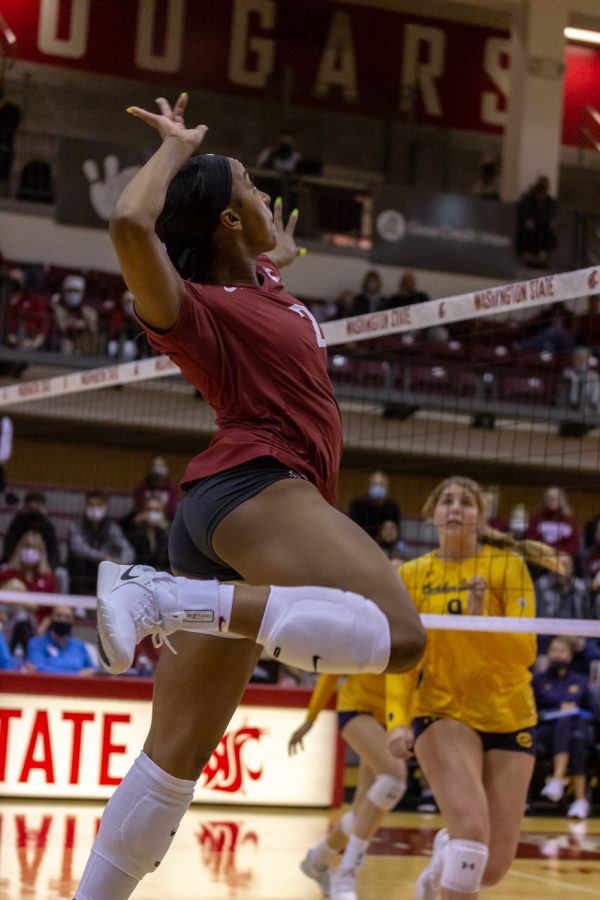 WSU middle blocker Kaylah Williams (2) prepares to spike the ball during a college volleyball match against California on Oct. 24, 2021, in Pullman.

The Cougs are coming back to Bohler this week to host the Arizona schools after a trip to California. The Cougs are currently ranked No. 21 in the AVCA Coaches Poll.

The last time the Cougs played either team, they swept them both on their home courts.

At  6 p.m. on Friday, the Cougs will play the first match of the weekend against the Arizona Wildcats.

In their last two matches, junior middle blocker Magda Jehlarova had over 25 kills and had a hitting percentage of .422.

Then, at 11:30 a.m. this Sunday, the Cougs will play the Arizona State Sun Devils.

Like the Cougs did with the Wildcats, they dominated offensively and defensively against the Sun Devils. Junior outside hitter Kalyah Williams and Jehlarova tied as leaders for the Cougs with 11 kills. Timmer had nine in the match. Timmer also had three aces on the day with fifth-year outside hitter Penny Tusa right behind her. Junior defensive specialist Julia Norville had two aces as well.

Jehlarova had three blocks, while Williams had two.

These next two matches are extremely important for the Cougs for their status in the Pac-12 and for a potential NCAA tournament appearance.

The Cougs are currently fourth in the Pac-12. Above them is Utah who plays UCLA who is first in the Pac-12. Washington is also playing the Sun Devils this Friday. All three of these matches are important to see where the Cougs could end up in the standings.