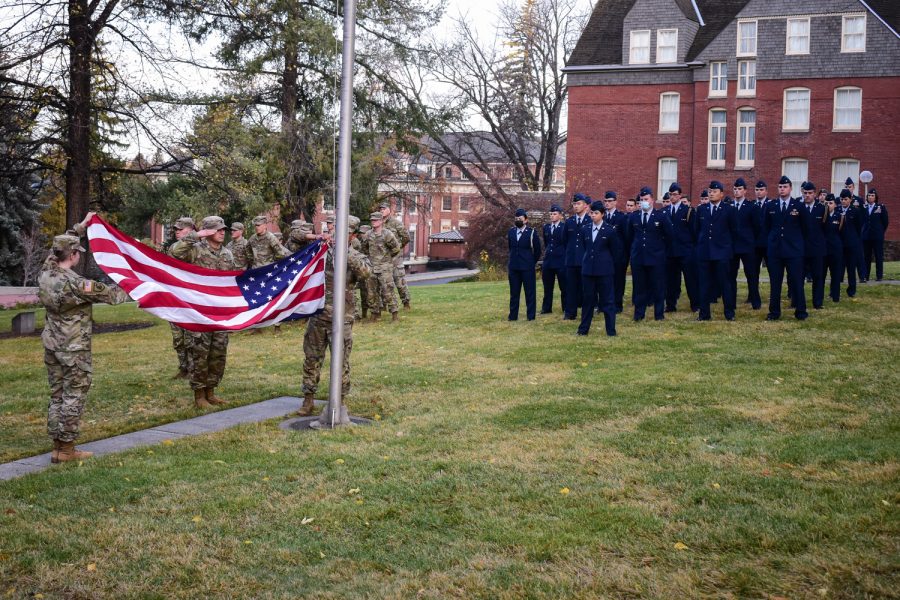 Army and Air Force ROTC cadets stand at attention and watch the American flag being hoisted up the flagpole.

Members of the Army and Air Force ROTC programs were present to recognize and honor those who have served in the U.S. military.

Following the ceremony, the committee hosted a reception in the Office of Veterans Affairs.

This is the first year the committee hosted a sunrise ceremony, Cromwell said. In the past, ASWSU hosted a ceremony with a keynote speaker.

Committee members chose to host the ceremony with no keynote speaker this year because they wanted the ceremony to focus on the moment and on current and veteran U.S. service members, Cromwell said.

A crowd of WSU community members including students, faculty and staff with various ties to the military watched the ceremony.

Smith said his uncle served in the U.S. Navy.

Among the crowd was Tristen Bland, a four-year U.S. Marine Corps veteran and freshman undeclared major. As a veteran himself, Bland said he sees Veterans Day as a day to relax and look back on the past.

“Veterans Day isn’t sad to me, that’s Memorial Day,” he said. “Veterans Day is happy. It’s a time to take a day off and look back and appreciate all your buddies and yourself and everything.”

Wednesday was the Marine Corps birthday, which provides another reason to celebrate, Bland said.

On Wednesday night, the committee hosted a banquet to recognize all active-duty members and veterans of the U.S. military. The event took place at the Elson S. Floyd Cultural Center.

Veterans Day, originally called Armistice Day, was first observed Nov. 11, 1921, when an unidentified soldier was buried in Arlington National Cemetery across the Potomac River from Washington, D.C. In 1926, Congress recognized Nov. 11 as Armistice Day to commemorate the 11th hour of the 11th day of the 11th month when World War I came to a close. In 1938, Armistice Day became a national holiday observed on Nov. 11, according to the Department of Veterans Affairs website.

Following World War II, WWII veteran Raymond Weeks declared Nov. 11 “National Veterans Day” to recognize all veterans and observed it with a parade in his hometown of Birmingham, Alabama. In 1954, Congress passed a bill declaring Nov. 11 Veterans Day, according to the website.