Top three hold steady; Cougs sit at No. 3 heading into meeting with Ducks 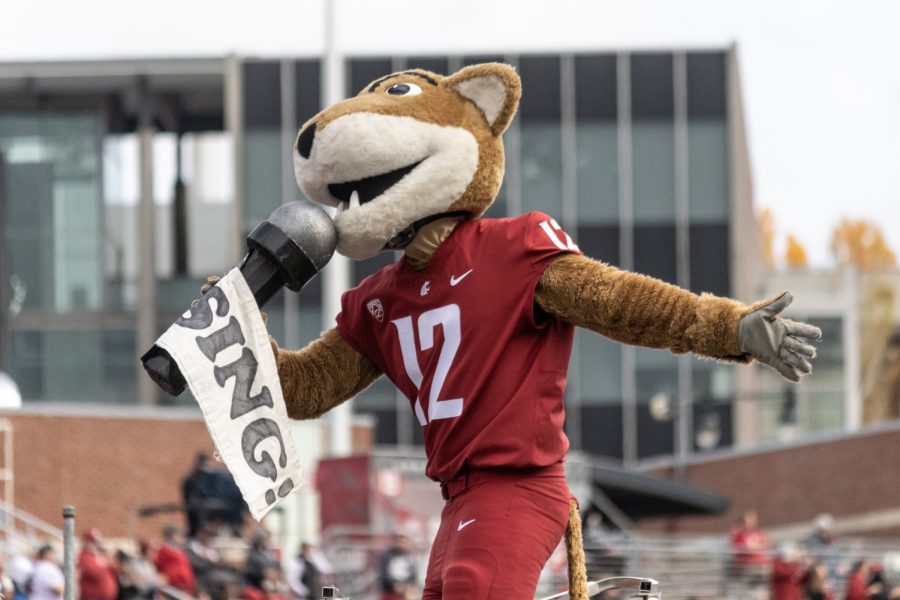 Butch T. Cougar encourgaes the crowd to sing along to "Back Home" during the first half of a college football game at Martin Stadium, Saturday, Oct. 23, 2021, in Pullman.

You know the story. This Pac-12 football season has been crazy and wacky. But this week has to be one of the craziest weeks, as Arizona won a football game.

OK, yes, Cal missed 24 players and five coaches due to COVID-19 protocols in their game against Arizona, but still, what is going on this week, Pac-12?

Oregon State is now on their yearly losing skid, Stanford’s offense is anemic along with their defense and USC still looks like the most inconsistent team in this conference.

Yes, Oregon won their game against Washington this weekend, but was it convincing? I do not know. Exposing the Huskies’ horrible run defense is not impressive, considering this run defense is near the bottom of the conference. But junior running back Travis Dye running for over 200 yards is impressive. The Ducks almost fell into the trap of the Huskies at home, but they escaped, once again. They will eventually fall into it.

Next game: 7:30 p.m. Saturday vs. Washington State on ESPN

Wow. This Utes team literally ran through the Cardinal defense in their dominant 52-7 win on the road. Utah ran for 441 rushing yards. 441. Sophomore running back Tavion Thomas carried the ball 20 times for 177 yards and an incredible four touchdowns. Freshman running back Micah Bernard ran for 110 yards and a touchdown, and junior running back TJ Pledger ran for 107 yards with a score as well. Six touchdowns on the ground? Yeah, this team is definitely the team to beat other than Oregon.

The Cougars are coming off a bye week, where momentum was carried after beating down Arizona State on the road. But the biggest test is coming for WSU, as they travel to Eugene to play Oregon in a battle for the Pac-12 North Division. Who would have thought that the 1-3 Cougars would be finishing the season in contention for the division title, something the Cougars have not won in a very long time.

After getting beat down at home against WSU a couple of weeks ago, the Sun Devils needed a bounce-back win. They got the solid win against USC with a little bit of help from the fox on the field. Arizona State had redshirt senior running back Rachaad White in the backfield after not playing against the Cougars, and he returned with vengeance. White ran for 202 yards on 28 carries, and he had three touchdowns as well, which seemed to be the story of this game. The Sun Devils need to stop turning the ball over if they want to climb the rankings, but getting solid wins is a good start.

Next game: 4 p.m. Saturday at Washington on FS1

The Bruins are coming off a needed bye, wherein their last contest, let the Utes put up 44 points on them while missing star senior quarterback Dorian Thompson-Robinson and their offense could not gel with freshman quarterback Ethan Garbers starting in their last game. The Bruins have a favorable three weeks to end their regular season, and with a potentially returning Thompson-Robinson to the offense, the Bruins look to go bowling for the first time in a long time for head coach Chip Kelly.

Next game: 6 p.m. Saturday vs. Colorado on Pac-12 Network

The Beavers beat Utah at home in a very offensive game just a few weeks ago to now have a 5-2 record, 3-1 in the conference and just one win away from being bowl eligible. Two weeks later, Oregon State is now 5-4, coming off back-to-back losses against California and now Colorado. What happened Beavers? Two missed field goals near the end of the game for Oregon State seemed to be the demise after having an offensive-dominated game. Penalties, along with missed scoring opportunities, cost the Beavers another chance to officially go bowling.

The Huskies came up a little short in a strong effort to knock off Oregon at home in Seattle, but with a run offense that could not get going, it made the whole offense stall. Washington’s run defense did do any favors for the offense, with them giving up 329 total yards on the ground but limiting transfer quarterback Anthony Brown of Oregon to 98 passing yards. Head coach Jimmy Lake will be suspended without pay for the next game because of a sideline altercation with a student-athlete, and maybe Washington can get to their winning ways.

Next game: 4 p.m. Saturday vs. Arizona State on FS1

The Trojans’ offense looked to get down the field pretty easy against Arizona State, but with most of the drives ending in three points, red zone issues are now the big problem as to why USC cannot win games. Junior quarterback Kedon Slovis, who was a Heisman candidate at the beginning of the season, struggled against the Sun Devils’ defense, getting picked off twice and not finding the endzone. The Trojans are fighting for bowl eligibility and if they want to go bowling, they need to fix their red-zone struggles.

OK, hear me out, the Golden Bears moving up after they lost to Arizona on the road? Am I crazy? Yeah, but when you do not have half of your coaching staff and 24 players, including your starting quarterback and kicker, out because of COVID-19 protocol, what else do you expect? The Golden Bears did the best they could under the unfortunate circumstances. A loss to one of the worst FBS teams this season is bad, do not get me wrong, but cut them slack; they have an outbreak.

I can not believe I am saying this, but the Buffaloes finally did not look like the worst Pac-12 offense for a second straight week. No disrespect to Colorado, but other than Arizona, they had not scored more than 14 points in a Pac-12 game before facing Oregon and Oregon State. It is finally nice to see Colorado’s offense seeming to finally click after weeks and weeks of struggles. The offense seems to finally be gelling together; next up is the defense.

I had the Cardinal as the seventh-best team in the conference just two weeks ago, coming off of a close and tough loss to Washington at home, and you want to know how they used that as motivation? They got beat down 52-7 at home against Utah. Stanford’s run defense is the worst in the Pac-12, and I can say that with a fact, after giving the Utes a total of 441 yards, just on the ground. The offense could not do anything as well, only totaling 167 total yards. This team looks bad, and three-straight losses just mean that the Cardinal are looking to next season.

Congratulations Arizona, you guys got a win! Your team is not going to go winless, this year. But was this a convincing win against a team that was missing half of their coaching staff and 24 roster players? Of course, it was not. The Wildcats ran for 202 yards on the ground, which is a sign that their run offense is fully functional, but shaky quarterback play from freshman quarterback Will Plummer made this game a lot closer than it should. Take the win Arizona, it will probably be your only one this season.