No. 21 Cougs face California and No. 20 Stanford 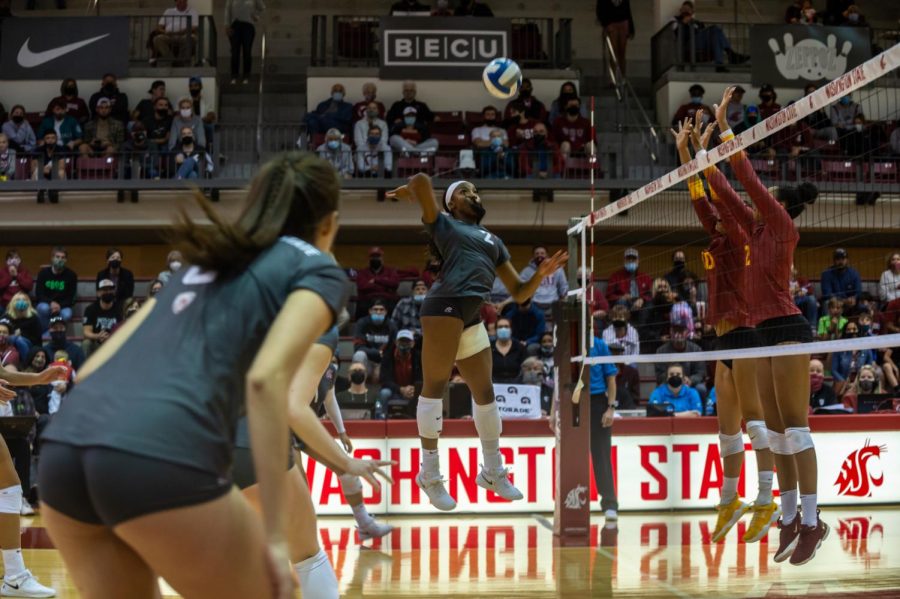 WSU middle blocker Kalyah Williams (2) spikes the ball during a college volleyball match against USC on Oct. 1 in Pullman.

The WSU women’s volleyball team will be traveling to California once more this season to take on the California Golden Bears and the Stanford Cardinal. Coming into the week, the Cougs are once again ranked No. 21 in the AVCA Coaches poll.

The Cougs are coming off a historical weekend. Last weekend, the Cougs had the highest ace count in one match. Junior middle blocker Magda Jehlarova had one of the best matches ever at Bohler Gym. She had a hitting percentage of .840 and 21 kills on 25 attacks with no hitting errors.

Stanford is ranked at No. 20 coming into this match. This match is critical for WSU to win to continue their march to the NCAA Tournament and hopefully make a deep run in the tournament.

The Cougs did lose to Stanford the last time the two schools met. WSU is on a three-match win streak, and the offense and defense are on fire. After a slow start against ASU and coming back to reverse sweep, the Cougs have proven to be an extremely powerful team and a determined one at that.

WSU is currently on an eight-match losing streak against Stanford. WSU is also 0-19 on the road in the series.

WSU will also play California this weekend. The last time these two schools met, the Cougs swept them 3-0. WSU has beaten California in the last three matches that the two schools have played against one another. WSU is also 4-17 on the road against the Golden Bears.

Junior outside hitter Pia Timmer and Jehlarova should be two players to watch out for in this upcoming weekend matches. Both are coming off of very big performances. Timmer is one of the best players in the Pac-12 when it comes to kills and overall offense.

Redshirt setter Hannah Pukis has also gotten some major swings in and has been a consistent server behind the line for the Cougs. Fifth-year Penny Tusa has also recorded an impressive number of aces on the season and should also be a player to watch this weekend.

Freshman opposite Katy Ryan should also be a player to watch this weekend as well. In her first season with the Cougs, Ryan has also been consistent behind the net offensively and defensively.