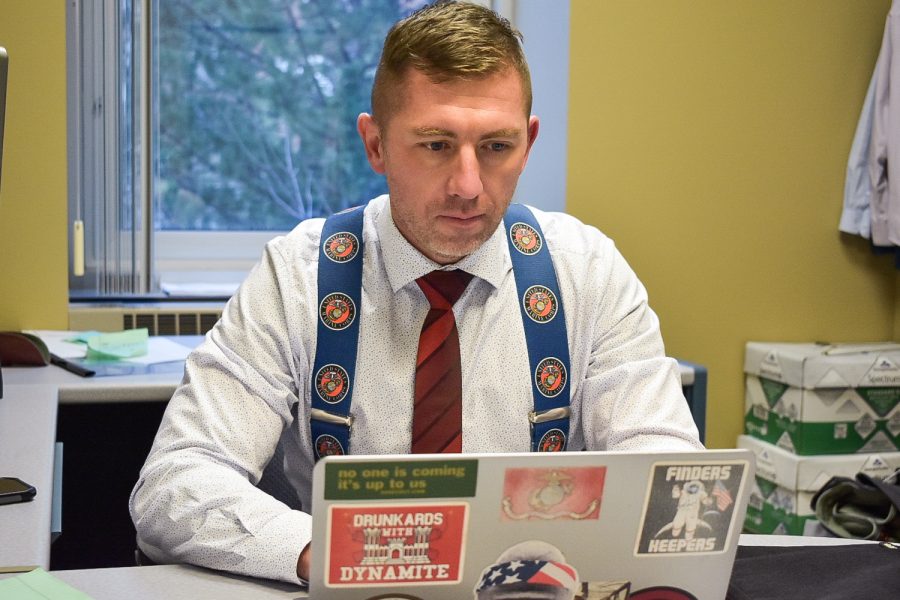 Sergeant Jefferson Griffeath works on his computer Wednesday, Nov. 10, 2021, in his office.

Business law professor Jefferson Griffeath has a strong moral drive to uphold the U.S. Constitution after serving 20 years in the Marine Corps.

Griffeath, former Marine infantry sergeant, said he joined the Marines straight out of high school when he was 18 years old.

He served in the Marine Corps for five years and did four years of active duty. His early training was based in San Diego, and he was stationed in Kāne‘ohe Bay, Hawaii, for his first four years of service. During his unit deployment rotations, he served in Okinawa, Japan; Honshu, Japan; Kyushu, Japan; Australia and on a Navy ship.

“I liked all the places I went to,” Griffeath said. “I was very fortunate. Not everyone’s as fortunate as I was when it came to [deployment].”

Griffeath said he was an anti-tank gunner, or missile operator. His tasks included basic foot patrol, driving and shooting missiles out of humvees.

Griffeath said started as a private and worked his way up to a sergeant and squad leader. He served in Iraq from 2004-05, and he was in charge of 13 Marines, including himself.

Griffeath grew up on military bases and in military towns; however, his father hoped he would not enlist.

“My grandfather served in World War II. My father served in the Air Force for 20 years,” Griffeath said. “I knew ever since I was a little kid that that was going to happen … My heart was always just being the guy on the ground with a rifle.”

Griffeath served his first combat deployment in the Philippines shortly after 9/11 for nearly five months. He was one of only 14 marines deployed to help protect locals from a terrorist group in the area.

The group is called Abu Sayyaf, which is a branch of Al-Qaeda. It is loosely organized but still terrorized the locals, Griffeath said.

People would run out of their homes just to wave as Marines passed by, Griffeath said.

“When you see people change from being scared all the time to being so happy and feeling more secure, it is really satisfying,” Griffeath said.

After his experience in the Marine Corps, Griffeath started teaching law at WSU in 2016. He decided to go into law and start his own law firm to help uphold the U.S. Constitution and protect human rights.

“I legitimately love my job,” Griffeath said. “I love teaching, that’s fantastic. I love being a professor. I could not have asked for a better gig.”

In 2016, Griffeath joined the Army as a National Guard squad leader and combat engineer.

“I joined back in the Army because I missed my people. That’s been one of the hardest parts about the military is it’s a separate culture,” Griffeath said. “I get lonely … I miss the people they give me more than anybody else.”

Christopher “Chris” Lebens, College of Education teaching assistant professor and Marine Corps veteran, recommended Griffeath for his current teaching position. They met their first year of law school, and their shared Marine Corps background bonded them despite their differences.

“By all means, we’re completely totally different people,” Lebens said. “[But] I don’t trust anyone else on the WSU campus as much as I trust him now.”

The Marine Corps has three core values: honor, courage and commitment. These values are what creates a bond between Marines, regardless of background, political views or social standing, Lebens said.

Being in the military creates perspective. It highlights the important life experiences and reduces the stress of things that might be less important than we think, Griffeath said.

“In my mind, a lot of bad things have happened,” Griffeath said. “But I can always just kind of go, well, I’m not dead and no one’s trying to kill me today.”

The military also requires an amount of sacrifice to ensure the safety of our nation, he said.

“The great sacrifice is to not be able to go hang out, have a beer with your friends, be able to hold your daughter, tell your girlfriend you love her. To be cold and wet and miserable and eat [meals ready-to-eat]  all the time,” Griffeath said. “God, if there was one word I could describe the entire four years that I had active duty, it would be lonely. So much of that was just so damn lonely.”

In the Marine Corps, there is a mentality of fraternal brotherhood. The brotherhood is formed because of each person’s sacrifice. Each branch of the military has to go through similar sacrifices, Lebens said.

“I was a big Spider-Man fan when I was a kid. The big take-home from Spider-Man is, ‘with great power comes great responsibility,’” Griffeath said. “That’s the single most famous quote from Spider-Man, and I feel that way as an American.”