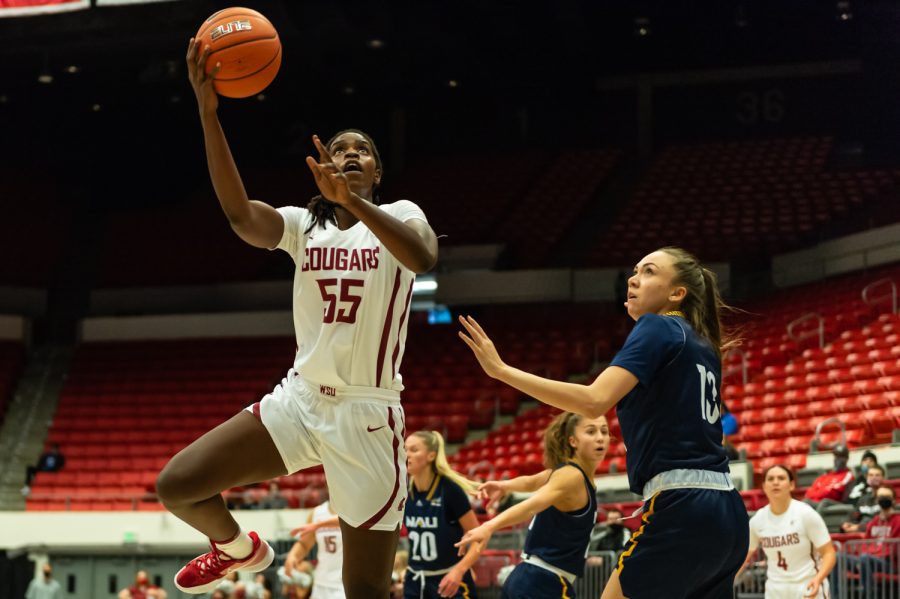 The Cougars women’s basketball team cruised to a 62-54 over the Northern Arizona Lumberjacks on Friday at Beasley Coliseum.

This was the first-ever matchup between WSU and Northern Arizona. The leading scorer for the Cougars was Charlisse Leger-Walker with 22 points. This is her second straight game where she scored in double digits, as she had 22 points against San Jose State.

Her efficiency on the offensive end lies in how the defense is formatted and how she not only involves herself but also the team where rhythm is involved.

“The main thing is probably just adjusting to how teams are playing,” Leger-Walker said. “Depending on the style, if they are in a zone or what they are doing on-ball, if they’re helping in too much, kinda just feeling that out a little bit really helps.”

Even though the Cougars were able to secure the win by eight points, head coach Kamie Ethridge believed the team could use this game as a learning experience and that Northern Ariona was a fast-paced team.

“They just put the pressure on us offensively and defensively,” Ethridge said. “We were still able to hold them to 54 points, and this is about us figuring out being better on the offensive end.”

WSU struggled on the offensive end as they were 32 percent in field goals and 5-21 from behind the arc. The slow shooting night was due to the pressure that Northern Arizona brought on the defensive end.

“I think they disrupted our timing with the offense a little,” Ethridge said. “We just didn’t execute well.”

Bella Murekatete had herself a night as she was able to post a double-double with 13 points and 15 rebounds. However, she was dealing with foul trouble, fouling out in the closing minutes of the game.

“Bella is going to have to manage her emotions,” Ethridge said. “I think she felt that she got knocked around little and good players don’t worry about officials. They just move on to the next play.”

Even with foul trouble, her presence was impactful on the defensive end, as she recorded five blocks against the Lumberjacks.

The Cougars also proved to be wiser with the ball, as they were able to limit themselves to just nine turnovers in the game.

“I think turnovers are always a thing we are conscious of,”  Leger-Walker said. “I think we do have to pick up the standard of looking after the ball and staying disciplined which helped towards the end of the game.”

The Cougars will be heading off to Moscow to go up against the Idaho Vandals on Nov. 21.