With their win, WSU heads to Ann Arbor to face No. 5 Tennessee 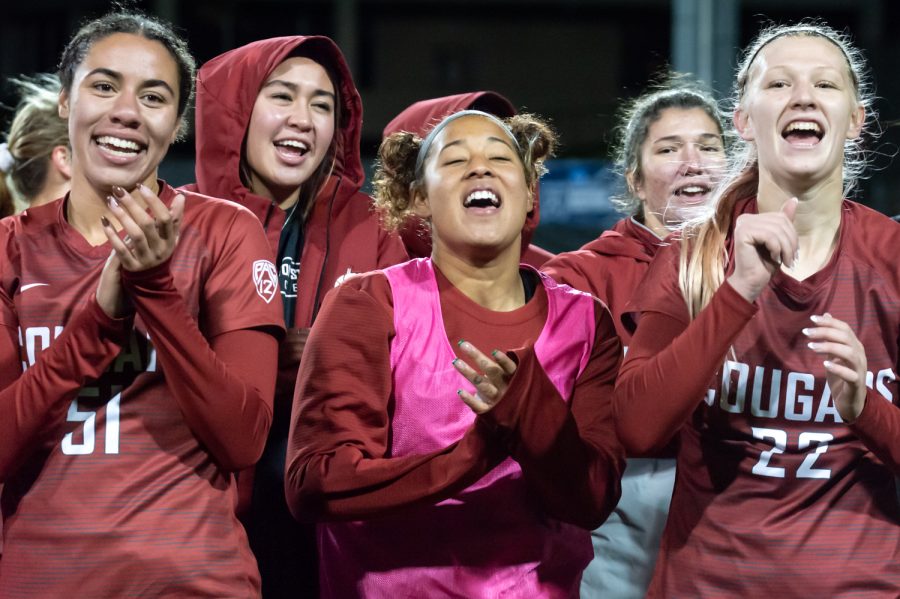 The WSU women's soccer team celebrates after defeating the University of Montana 3-0 in an NCAA Tournament match at the Lower Soccer Field, Saturday, Nov. 13, 2021, in Pullman.

WSU soccer won their first match of the NCAA tournament on Saturday, defeating Montana 3-0 on home turf at the Lower Soccer Field. With the win, WSU improved their record to 14-2-4.

“For us, we are really excited because as you’ve seen a lot of Pac-12 teams are out so we told ourselves we need to come make a statement because we believe we’re just as good as everyone else,” WSU senior midfielder Sydney Studer said. “We take it one step at a time and one game at a time and any opponent we study, we work on, and we try to achieve what we can.”

Studer opened up play with two shots in the first five minutes of the game. The Cougs continued to dominate the match, with shots by junior midfielder Grayson Lynch, fifth-year midfielder Sydney Pulver and sophomore forward Alyssa Gray.

“We were too relaxed with the ball versus trying to understand when they came out we could go forward,” head coach Todd Shulenberger said about the beginning of the match. “So we struggled with that a little bit in the first half.”

The Cougars continued to have control of the ball, peppering Montana with shots until they finally managed to break through in the 36th minute. Sophomore midfielder Marin Whieldon, assisted by senior defender Mykiaa Minniss, scored her first goal of the season.

“This is my first time [in the NCAA tournament] and it’s such an amazing experience,” Whieldon said. “Everything we’ve already done so far is so awesome. And I am just blessed to be a part of this team and a part of this journey.”

The goal was the only action for the rest of the first period. The Cougars opened up the second period with more shots but Montana’s defense came through. In the 60th minute, junior Grizzly midfielder Sydney Haustein received a yellow card.

Montana could not get a shot in edgewise as WSU continued to attack Montana’s defense. The action heated up in the 78th minute after Montana was called for a foul in the box. Pulver was up for a penalty kick for the Cougars and scored her first goal of the postseason.

Just three minutes later, Lynch, assisted by Studer and Pulver, scored the last goal of the night. It was her eighth goal of the season. After that goal, the Grizzlies managed to gain control of the ball with a shot by junior defender Allie Larsen.

Shulenberger said he was happy with the way that WSU was in “complete control” of the match.

“I mean they had two shots to our 20,” Shulenberger said. “What was concerning is we forced some things tonight. We tried to play too much down the middle tonight. They played five in the back, sometimes it was six. So it made it difficult. So credit to them. But we solved it.”

WSU will return to action with their match against No. 5 Tennesee on Friday. The match will be hosted by No. 9 Michigan.