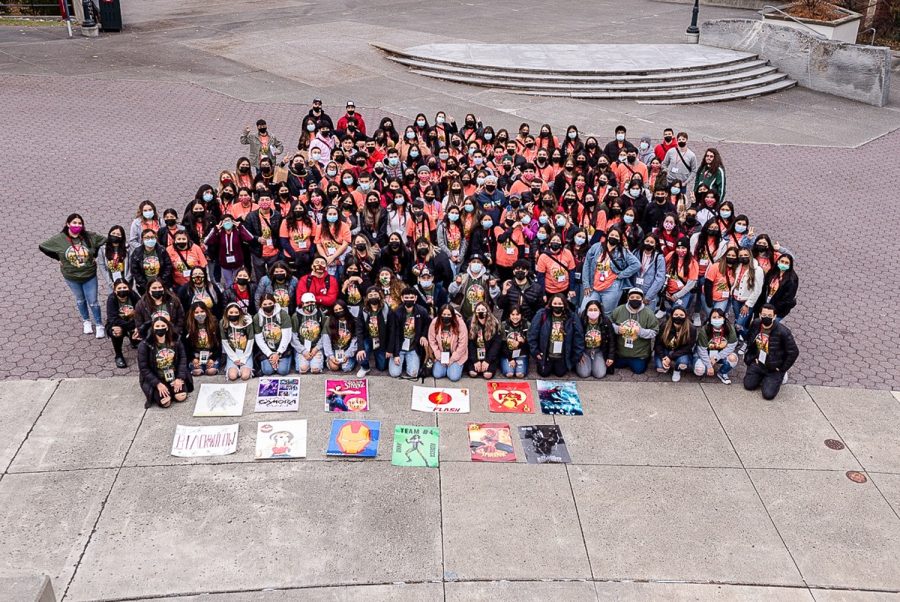 Participants and organizers of the conference line up for their annual group photo Nov. 14.

While the wind was whipping around Glenn Terrell Mall and students were studying quietly in the Compton Union Building, the Smith Center Of Undergraduate Education was bustling with excited chatter and bright ideas. Students filed into different rooms for their choice of “Children of Aztlan Sharing Higher Education” workshops with a thrill running down their spine.

Among the workshops was a poetry seminar. Rodrigo Rodriguez, Wenatchee High School student, collected his thoughts, his interpretation and inspiration from the workshop and created a work of art.

In a bittersweet moment, Rodriguez said he felt the poetry seminar co-host Veronica Sandoval’s poetry was sad but also heartwarming. He hopes it translated into his poetry as well.

“I’m really into writing, and the way the women spoke today, I thought her words were very wise, and just the way they talked about their poetry; it connected with me, and it also inspired me to write a little poem,” Rodriguez said.

Earlier this year, Rodriguez was outed to his parents about his sexuality and being a member of the LGBT community.

“My mom took it better than my dad,” Rodriguez said. “[In the poem] I wrote the line, “Y tristeza le llega a los ojos de mi papa” which means, “I bring sadness to my father’s eyes,” because I had never seen my father more sad or disappointed.”

Despite reminiscing and discussing a topic so vulnerable, Rodriguez said he was grateful for his mother’s support because coming out is not an easy process, especially when it isn’t on your own terms. Although his experience didn’t turn out too well, he is still on his way up.

WSU was originally at the bottom of his college list, Rodriguez said. After the CASHE Conference and his experience on the Pullman campus, he changed his mind.

“[WSU is] at the top of my list,” he said. “I’m involved in MEChA [Movimiento Estudiantil Chicana/o de Aztlan] at my high school. They [WSU] don’t just teach about things culturally, but they address social issues like LGBTQ+ issues, and that’s really important for me as a part of the LGBTQ+ community.”

The CASHE Conference was held over three days, from Nov. 12-14. There were over 130 students who came to Pullman to participate in the weekend conference and a plethora of team leaders and volunteers.

MEChA de WSU organizes the leadership conference, according to the WSU Student Involvement website. It encourages high school students of all Chicanx/Latinx backgrounds to pursue higher education. It targets low-income and first-generation students, opening them up to the possibilities and opportunities through organizations like TRIO, CASHE and MEChA and College Assistance Migrant Program.

The event is held annually on the Pullman campus and “intends to foster and address the needs of higher education among the Chicanx and Latinx community while cultivating leadership development for current Washington State University Students,” according to the website.

The event was held online in 2020 but returned to in person this fall. Gisselle Salazar, the communication director for CASHE, said the event’s in-person setting this year reminded her of when she attended the conference in 2018. It makes it worth it to see how leaders interact with students and how students interact back.

“You are breaking the barrier for other students to come and see how everything works,” Salazar said. “How I see CASHE is, like, they were the person I would have wanted as a kid to help me.”

The weekend was filled to the brim with events. WSU hosted a student talent show, different assortments of workshops to visit, student panels, tours of campus and more. Students eagerly chatted with WSU club representatives at the resource fair Saturday night, gaining a clearer idea of the student atmosphere and organizations they may be interested in.

As a participant from the 2020 conference, WSU freshman Geobanny Pineda Cuevas decided to become a CASHE student volunteer to help out and become involved. He said he is excited to continue working with CASHE and help in the future.

“I know when I was attending it, you could really see the passion in the team leader’s eyes, although it was online,” Pineda Cuevas. “Our goal is to make it even better than it has been before, especially with it being the 25th year of CASHE.”