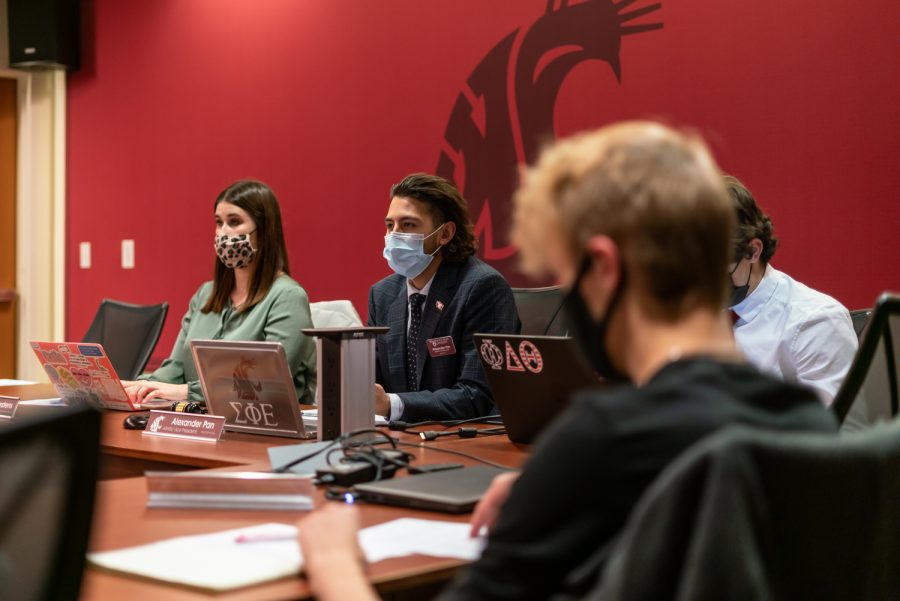 ASWSU Vice President Alexander Pan listens to a presentation on Wednesday, Nov. 17 in the CUB.

City Councilmember-elect Francis Benjamin spoke about his work as co-chair of the Pullman 2040 organization and received input at the ASWSU Senate Wednesday night meeting.

Benjamin said the organization was developed because community members were concerned that projects around the city were short term. Pullman 2040 is working on over 50 different projects, Benjamin said. They focus on areas like community, education, development and recreation.

The organization’s steering committee is working toward more student involvement and input, Benjamin said. Several ASWSU senators shared their ideas for what the organization should focus on.

Students are unaware Pullman uses water from the Grande Ronde Aquifer, said Gabrielle Lund, College of Arts and Sciences senator. As an environmental science student, Lund would like to see an awareness campaign to inform students about the aquifer and sustainable resources.

All-Campus Senator Kiana Parsi said she was concerned with some intersections near College Hill, like the B Street and Stadium Way intersection. The intersection is frequently backed up because the left turns must yield to oncoming traffic.

Pro Tempore Katie Carstens said she acknowledged universities function to make money, but also hoped there was a voice advocating for the university as an institution of education.

Patrick said he is also working with the Children’s Miracle Network Hospitals to develop a fundraising event for March 2023.

The senate passed a bill requiring senators who miss meetings, events and office hours to make up their missed time through other activities. Excused and unexcused absences can be made up by attending meetings and events of other Registered Student Organizations but are subject to discretion by Carstens, she said.

This is to make sure senators are continuing to do the work they are paid for, Carstens said.

The senate also passed a resolution asking to increase the number of community service officers at WSU from one to four.

The university is looking to replace Coug Bikes with a new form of transportation, said University Affairs Director Sam Gerlach. Electric scooters are under consideration.

University Recreation staff must locate and return the Coug Bikes to their racks every day. Often, they are left at the bottom of hills on the south side of campus. The work also takes longer if they are understaffed, she said. The Coug Bikes will likely go back to Gotcha, the company that owns them.

ASWSU is hosting a campus cleanup day 2:30-5 p.m. Dec. 3 on Glenn Terrell Mall outside the Compton Union Building, Carstens said. Garbage bags and gloves will be provided, as well as hot cocoa and cider at the end.