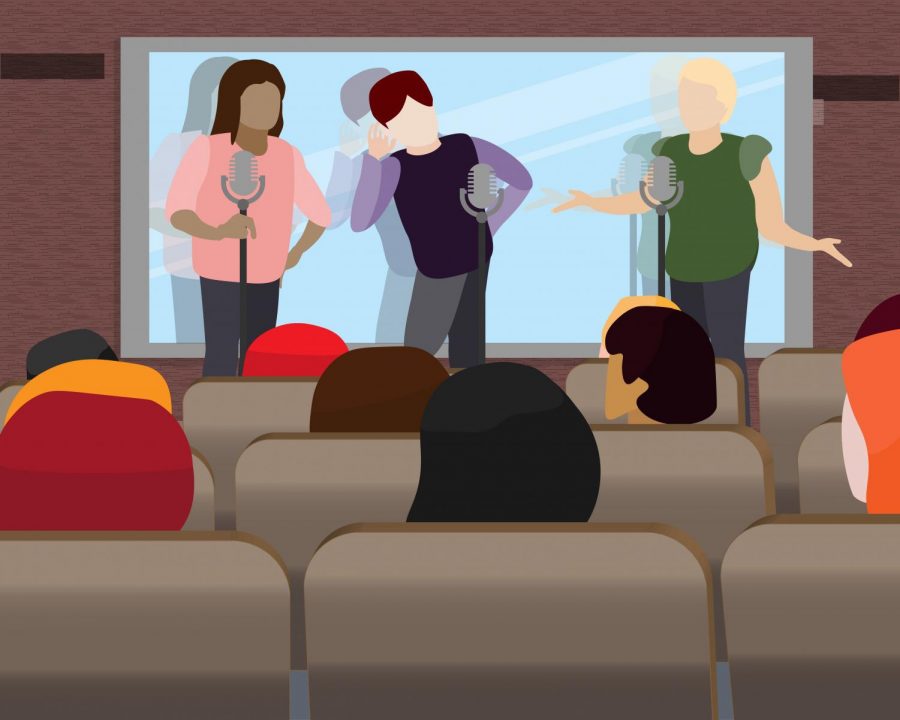 Nuthouse Improv Comedy has been entertaining audiences at WSU for over 20 years.

STAGE Student Theatre and Nuthouse Improv Comedy presented their last night of improv for the fall semester on Nov. 12 in the Compton Union Building.

WSU students Madeline Frey, Ethan Simental and Izabella Meza were the three performers who entertained the audience with funny skits and clever jokes.

Frey, senior bioengineering and chemistry major, said she joined STAGE because theater and comedy have served as an outlet for her since high school.

Sophomore mathematics major Simental said he joined this year because he was looking for something fun to do.

Meza, sophomore political science major, said this is her second year in STAGE but her first year in person. She joined because she likes having an outlet to be funny and to have people validate her jokes.

The show was originally going to be an alumni show, but no alumni were able to show up to participate in the show.

Frey said that in the past, the audience has filled up the room at STAGE shows but the pandemic reduced the number of people who usually attend. Their final performance was one of the highest turnouts of the year.

Anyone can join student theater; students just have to show up to rehearsals. Frey said there are a lot of new members this semester, and there is a strong sense of community in the group.

“I personally love it a lot more in person; you get the vibe and energy from the audience,” she said. “Whereas on Zoom, it’s a different format, a different way of acting because you’re constricted to what the camera can see. So I prefer in person a lot more.”

When they were doing comedy over Zoom, Meza said the Nuthouse team could not tell how the audience reacted, so it was harder to work together with other cast members. She loves performing in person and often loses her breath on stage from moving around so much during her energetic performances.

Simental said the audience was honest and that you could tell when the jokes were funny or when they stumbled. He said audience feedback is good for shaping the performance because you can narrow down what the audience likes, which makes for a better show for everyone involved. It makes it more fun to perform and more fun for the audience.

Max Mattox, senior broadcast production major, said he enjoyed the show. He has been to a few STAGE shows and each one is a little different. He has been to three events this year and would recommend the group to a friend.

“I thought it was pretty funny,” Mattox said. “It was different than I expected. I have been to one before and each one’s a little different. I keep coming back, so it’s good enough to show up again.”

STAGE practices from 6-7 p.m. every Tuesday and Thursday, Frey said. When they have a show, they do a mini-rehearsal beforehand with all of their cast members. They go through the different improv games they perform and give each other constructive feedback.

Simental’s favorite part about performing is making people laugh. He said that it can be scary, but that practice helps get his anxious energy out.

Meza enjoys the fun comedy bits and quick thinking on her feet. She said the hardest part about improv is making people laugh so she does not get stuck with a bunch of people staring at her and not reacting.

“I just really see who the person is from an analysis, and I can sort of tell what makes them do a little giggle, a little chuckle,” Meza said. “Then I just continue on with that and put it in my mental books saying, ‘they like that, continue with that’ or ‘don’t bring that up again, that one sucked.’”

Simental said it can be hard to keep the flow while performing when neither of you know exactly what you are doing and you are just trying to figure it out. Sometimes it does not work out and the actors stumble, but that is an important part of learning how to be better at improv.

Frey said the final show was successful due largely to team chemistry.

“You have to know each other and understand the chemistry,” Frey said. “Stage chemistry is a big part of it because you need to be able to go off on another joke into another joke and you use each other as a springboard. If you have a disconnect or a misunderstanding, it’s hard to have that connection.”