No. 15 Cougs head to Ann Arbor to face No. 6 Tennessee 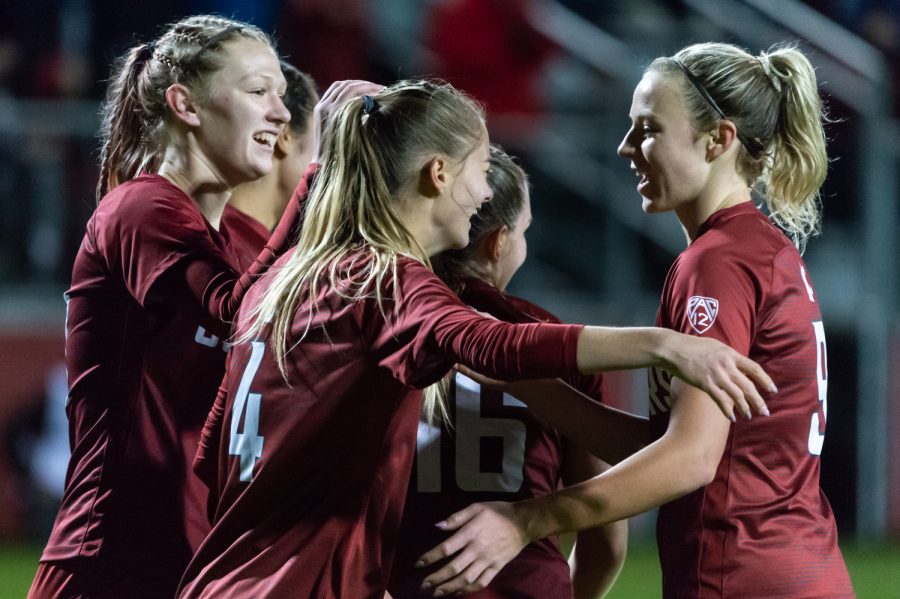 WSU forward Grayson Lynch (4) celebrates with her teammates after scoring a goal against the University of Montana in the second half of an NCAA Tournament match at the Lower Soccer Field on Nov. 13, 2021, in Pullman.

WSU soccer is set to play Tennessee in the second round of the NCAA Tournament at 11 a.m. Friday in Ann Arbor, Michigan. The Cougars won their first game of the tournament against Montana 3-0, which was the fourth-straight time the Cougs captured a win in the opening round of the NCAA tournament.

“How good they are is nothing we haven’t seen in the Pac-12,” WSU head coach Todd Shulenberger said, “and I always say when we advance it’s not so much what we do in house as it’s the culture we have in this conference and the teams we play day in and day out.”

Tennessee soccer is a formidable opponent. They are ranked No. 6 in the nation in the United Soccer Coaches poll with a 17-2-2 record. In their last match, the Volunteers won against Lipscomb 3-0. The match was the Vols’ first NCAA game since 2019.

The game didn’t see much action until the end of the game, when the second and third goals were scored in the 74th and 75th minutes. Ellis has a 100 percent scoring record with two goals on two shots this season.

Tennessee is making its 13th overall NCAA tournament appearance since 2001. They have a 15-10-3 record in the tournament and have reached the Sweet 16 six times, most recently in 2018.

The last match between the Vols and the Cougs ended in a 2-2 tie in Pullman during the NCAA tournament. Overall, the Cougs have a 1-2-0 record against the Volunteers with only one of those matches occurring after 2010.

“I always remind our group everyday, winning is hard, don’t you forget that. It doesn’t matter who we play, when or where, winning is hard,” he said. “Because it’s not easy to do what any team is doing. So I always say when you’re winning it’s actually harder because you gotta keep up the consistent progress to move forward.”

Don’t miss out on the Cougar action. The game can be seen live on the Big Ten Network with stats by StatBroadcast.