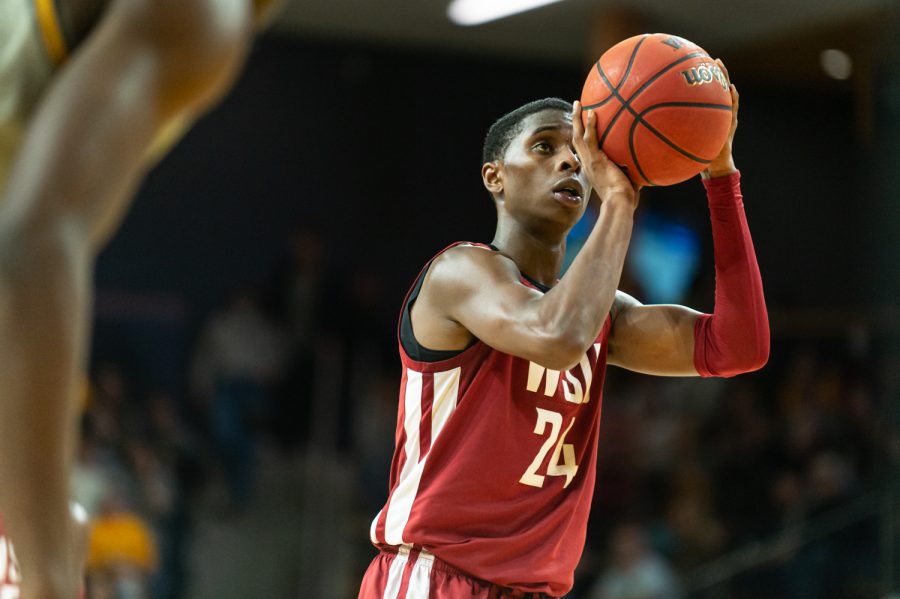 WSU guard Noah Williams (24) shoots a free throw during a college basketball game against the University of Idaho on Nov. 18, 2021, in Moscow, Idaho.

The Cougs men’s basketball team (5-0) continued their flawless season with their closest game of the year against Winthrop (2-3), 92-86.

Michael Flowers led the Cougars with 20 points, shooting 8-11 from the free throw line. Monday’s outing is Flowers’ highest scoring game as a Coug. Flowers was also responsible for two assists and one rebound.

“This is the most talented team I’ve played on so it takes pressure off me,” Flowers said. “I’m normally the one that kind of has to do a lot of the offensive things and carry a team and stuff. Now I’m playing with players like Noah [Williams] who can go out there and score at any time they want.”

Overall, WSU shot 52 percent from the field with 36 rebounds. WSU’s ability to sink free throws was the key to a Cougar victory, accounting for 28 points from the line.

Junior guard Noah Williams led WSU early in the game, scoring 12 points in the first half. Williams showed some dynamic shooting ability, making shots inside the paint as well as from three-point range. Williams finished the game with 19 points, three assists and five rebounds.

“We have a deep team, we have so many other players that can do this as well,” Williams said about WSU’s ability to score.

After a rough offensive showing against Idaho, Tyrell Roberts seemed to be back in his groove on offense going 3-5 on three-point shots. Roberts also shot 100 percent from the free throw line in the Cougar victory. The former Division II All-American continues to prove he deserves a spot on the WSU roster.

Last week, WSU’s Mouhamed Gueye earned Pac-12 Freshman of the Week honors and is making a case for the award again this week, starting with Winthrop. Gueye was responsible for eight rebounds and two blocks in Monday’s victory.

So far this season, Winthrop averages over 30 three-point shots per game. Winthrop guard Patrick Good led the Eagles offense from range, going 11-19 on 3-point attempts. He was responsible for an astounding 33 points in the Eagles’ loss. Good also recorded seven rebounds in the game.

“We lost him in zone late, which was unforgivable,” WSU head coach Kyle Smith said. “Too many free looks in that so we got to find someone who can run a shooter off. We got to do better there.”

At the end of the first half, WSU led Winthrop 47-28. WSU’s Flowers ended the half by draining a long, buzzer-beating three-point shot.

About halfway into the second half, WSU fell into an offensive drought. The Cougars failed to make a field goal for over nine minutes until DJ Rodman broke the drought with a layup. Rodman finished with nine points in the Coug victory.

Winthrop mounted a comeback during WSU’s offensive struggle, bringing the deficit to single digits for the first time since early in the first half.

WSU’s shaky second half also presented the Cougs with foul trouble. Efe Abogidi and Gueye both finished the game with four personal fouls.

Winthrop experienced foul trouble of their own with big man D.J. Burns Jr. fouling out late in the second half. Burns Jr. was responsible for 14 points from close range.

Winthrop’s Russell Jones Jr. and Micheal Anumba also fouled out with under three minutes to go in the game. Jones Jr. scored the second-most points for the Eagles with 19. Anumba put up 11 points for Winthrop, eight of which came from the free throw line.

Winthrop’s tendency to foul the Cougs gave WSU plenty of opportunities from the free throw line, accounting for most of WSU’s late-game points.

Last year, Winthrop finished first in the Big South conference for the second consecutive year with a 23-2 overall record. Winthrop is projected to win the conference again this year.

The win for WSU is their 19th consecutive nonconference win.