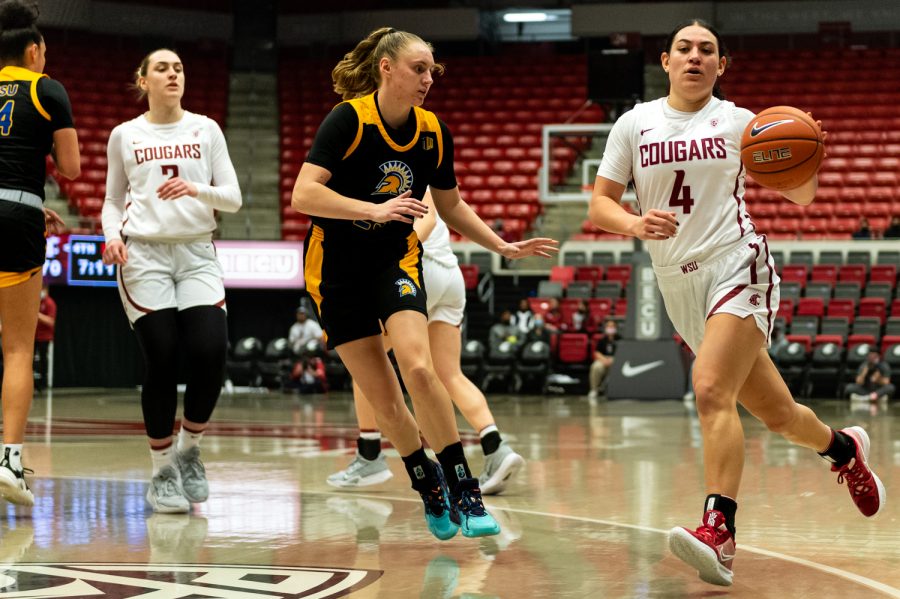 WSU guard Krystal Leger-Walker (4) dribbles towards the hoop during a college basketball game against San Jose State University on Nov. 9, 2021, in Pullman.

The Cougars women’s basketball team (4-0) fought hard and pulled off the win against the Miami Hurricanes (4-1) 62-47 in the Baha Mar Hoops Pink Flamingo Championship on Thanksgiving Day.

The championship marks the second time in program history that the Cougars have played regular season contests in the Bahamas. Thursday’s game between the Cougars and Hurricanes marked the second time that the two schools faced each other with the previous coming in 2019 at the Miami Holiday Classic.

The team as a whole had a good day with scoring, but Johanna Teder was the leader for the Cougars with 15 points. Charlisse Leger-Walker had a great game for WSU, as she secured a double-double with 15 rebounds and 13 points. Prior to Thursday’s game, Leger-Walker scored 10-or-more points in 25 of her 27 career games with WSU. She also led the team in assists with five.

Leger-Walker’s dominance from rebounding in today’s game mainly comes from defense and how aggressive she is while playing defense.

“There’s nothing she can’t do,” WSU head coach Kamie Ethridge said. “I mean defensively, if you just studied her defensively, she guards any position on the floor, she can keep people in front of her.”

Bella Murekatete had a solid performance for the Cougars, recording 12 points. Murekatete proves each game why she is one of the most improved players in the Pac-12 this season as she currently averages a double-double at 15.7 points and 10.7 rebounds per game. Her defensive presence against the Hurricanes was there as well, leading the Cougars with four blocks.

WSU excelled in capitalizing on opportunities to put the ball in the hoop. The Cougars had 14 points off turnovers and 12 second-chance points which helped build momentum. Throughout the game, the Cougars were able to move the ball around and find the open shot. WSU also had 34 points in the paint as that helped the Cougars to add pressure on the Hurricanes.

WSU will face No. 5 North Carolina State at 3 p.m. this Saturday for their second game in the Baha Mar Hoops Pink Flamingo Championship.