Cougs take down Huskies in Seattle 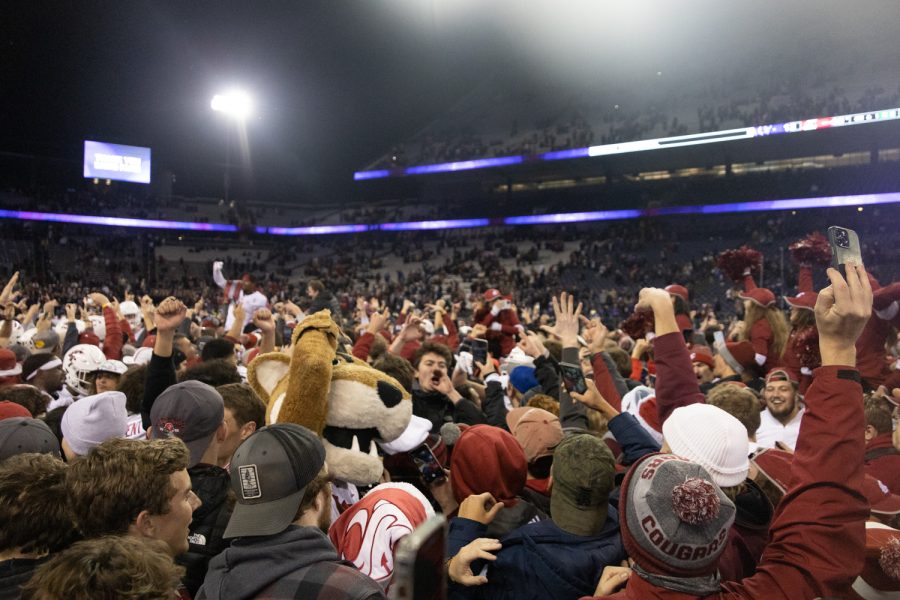 The win for WSU is the first time the Apple Cup will return to Pullman since 2012, largely due to the seniors on the team.

One of the leaders for the Cougs this season has been Max Borghi. Against the Huskies, Borghi ran for 129 yards and two touchdowns. With the two touchdowns, Borghi is now tied for the most touchdowns in WSU history. Borghi would have added a third to make him the stand alone touchdown leader, but the 50-yard run was called back due to a holding flag.

“I know the rivalry in the state is huge,” Borghi said. “I absolutely hate the Huskies, every Cougar absolutely hates the Huskies. Purple’s the ugliest color in the world and I just know this cup’s never going back over here.”

WSU quarterback Jayden de Laura had an excellent outing in rival territory, throwing for 245 yards and completing 27-32 pass attempts. Although de Laura did not throw any touchdowns, he leads Pac-12 quarterbacks in touchdowns thrown with 23 over the course of the season.

The Cougs set the tone early in the first quarter with Borghi’s first touchdown run, putting WSU up 7-0 in just four minutes of play. The Cougs failed to cross the goal line on the next drive and settled for a field goal from birthday boy Dean Janikowski, 10-0. Janikowski went 4-5 on field goal attempts, the longest being from 41 yards. His four made field goals ties Drew Dunning (2002, 2003) for the most field goals in an Apple Cup. A record seems like a great birthday gift to give to yourself.

The Huskies failed to respond with points of their own until late in the second quarter. Huskies running back Kamari Pleasant scored the first UW touchdown of the game on a ten yard run up the middle, lessening WSU’s lead to 13-7.

The score remained 13-7 until halfway into the third quarter. These tense moments were the most precarious for WSU fans, as the team has had some difficulty keeping leads in the second half this season. Cougar fans took a sigh of relief as Borghi added six to the WSU lead. Another extra point flew through the uprights from Janikowski to make the score 20-7.

Janikowski kept his kicking leg warm on the field, responsible for the next WSU points with a 41-yard field goal, 23-7.

WSU running back Deon McIntosh responded to Borghi’s touchdown with one of his own at the start of the fourth quarter. All year, McIntosh has been the go-to player for runs up the middle. McIntosh’s touchdown run was no different, powering through the Huskies defensive line for a two yard touchdown, 30-7.

The Huskies scored next on a one-handed catch by Rome Odunze, 13-30. Odunze leaped into the air and fully extended to come down with the football. The catch had similar traits to Odell Beckham Jr.’s famous one-handed grab from a few years ago with the New York Giants. Odunze’s catch would be the last time Huskies fans cheered in the game as the crowds of purple slowly turned into crimson as a Cougar victory became clear.

After another field goal from Janikowski to bring the lead to 33-13, WSU cornerback Armani Marsh caught an interception and ran into the end zone for a pick-six. This was Marsh’s second interception of the game, his first interception foiled UW’s two-point conversion attempt. The WSU defense has consistently forced turnovers this season, but had not scored a touchdown until Marsh crossed the goal line in the fourth quarter, 40-13.

“Armani’s been great,” Dickert said. “Talk about a guy that’s Mr. Consistent. You know what you’re gonna get. I believe he’s an All-Pac-12 player.”

The Cougs capped their victory by flooding the field with Crimson and Gray. De Laura gathered in the center of the crowd at the 50-yard line, planting a WSU flag on the purple and gold W.

The WSU defense had another commendable outing against the Huskies, responsible for four interceptions, five if you count the interception on the two-point conversion, in the rivalry matchup. The Cougs took advantage of UW’s freshman quarterback Sam Huard. Huard had a rough first full collegiate game, throwing 17-31 for 190 yards.

Looking at the statistics from the game, it is easy to see why WSU was victorious. The Cougs moved the chains 26 times compared to UW’s 11 first downs. WSU also forced four turnovers in the win and had zero turnovers themselves. The Cougar offensive line gave de Laura ample time for plays to develop, resulting in zero sacks.

WSU’s 27-point win margin is the largest win for the Cougs in Apple Cup history.

Now the Cougs play the waiting game. If Oregon State can defeat Oregon today, the Cougs will earn a spot in the Pac-12 Championship. Even if the Ducks win, WSU will have one more game this season, as they are bowl eligible unlike the Huskies.