WSU volleyball falls three sets to one in Seattle 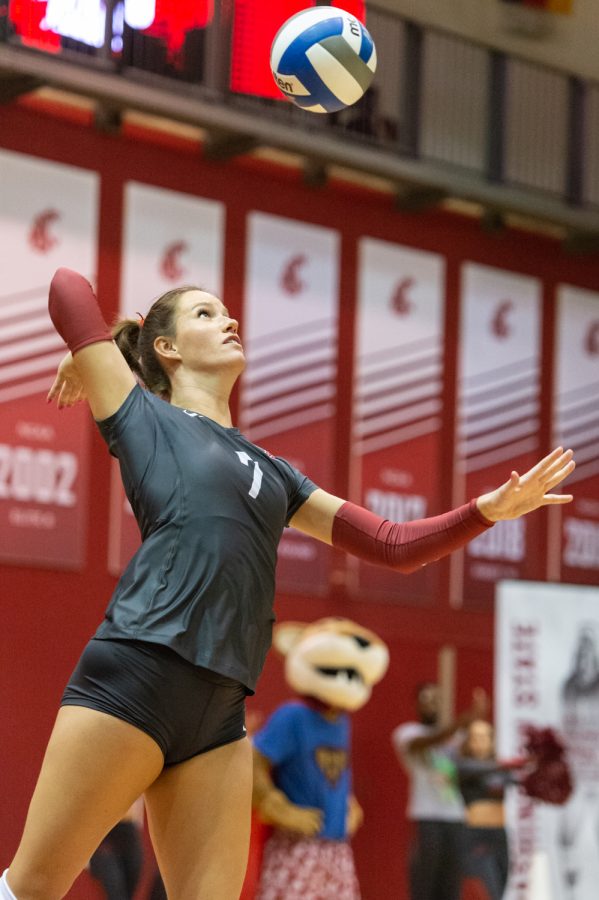 The Cougs fell in their final match of the regular season against the Washington Huskies on Saturday, finishing the season 19-11 with a chance to make it to the NCAA Women’s Volleyball Tournament.

The two teams split the Apple Cup series this year with a WSU win earlier this season. The match was full of big runs, great saves and exciting kills for both sides.

In the first set, the Cougs and Huskies battled back and forth. The Cougs kept up with the Huskies and had them within three most of the set. After a challenge of a ball that was ruled out of bounds, the Huskies were ahead 23-21.

The shift of the points was the momentum that the Huskies needed to win the first set. Freshman opposite Katy Ryan did have several major kills but it was not enough to win the match.

In the second set, the Cougs came back and dominated both offensively and defensively. The Cougs won 13 of the first 14 points and even went on a 10-0 run with help from the junior defensive specialist Julia Norville on the serving line.

The Huskies did make a little bit of a comeback. However, the lead was too great for Washington to regain any momentum. WSU closed the set with kills from redshirt junior setter Hannah Pukis and redshirt junior middle blocker Kalyah Williams.

Late in the set, WSU head coach Jen Greeny challenged an out of bounds kill from Ryan that was overturned which kept an eight-point lead. WSU won the set 25-18.

The third set was not as enjoyable as the Huskies dominated. Washington took an early 5-0 lead and never looked back. The Cougs did come back to be down 12-7, but it was too late for the Cougs and Washington took control for the rest of the third set.

In the fourth set, the Huskies jumped ahead once again to 12-1. The Cougs had a small scoring run of 4-1, but the hole was too great for the Cougs. Washington recorded four aces. The Cougs tried to recover but the number of kills from the Huskies and the errors from the Cougs was not helpful for the potential comeback.

Fifth-year Penny Tusa did break another program record and became the program record holder for the most sets played at WSU. This was Tusa’s last match as a Coug in the regular season.

Ryan was named player of the match with 15 kills and a .333 hitting percentage.

The NCAA Tournament selection is set to take place at 5:30 p.m. today.