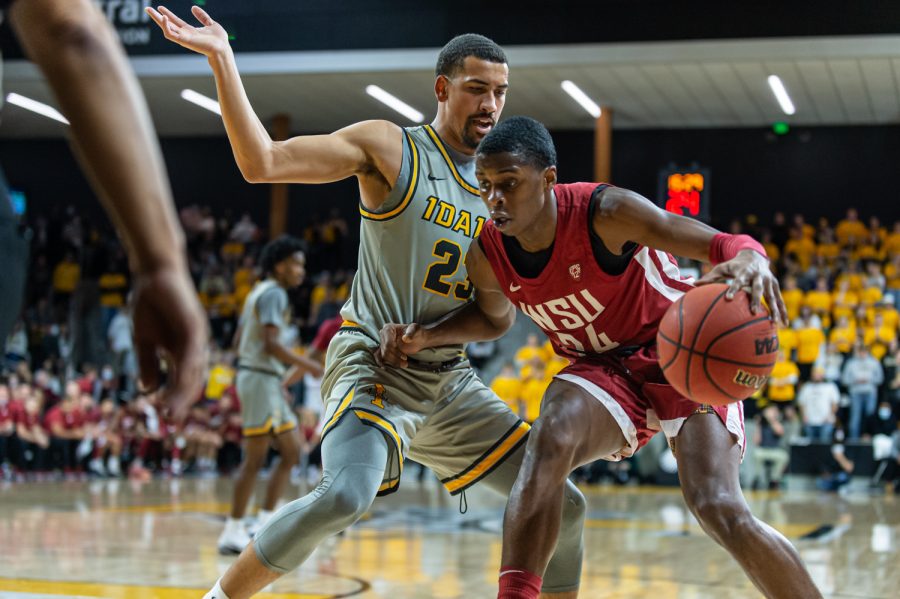 WSU guard Noah Williams (24) dribbles the ball during a college basketball game against the University of Idaho, Thursday, Nov. 18, 2021, in Moscow, Idaho.

The Cougs (5-1) play their first Pac-12 matchup of the year and their first true away game against Arizona State (2-5) on Wednesday.

Both teams come into Wednesday’s game with losses in their previous matchups. The Cougs recorded their first loss of the season on Saturday against Eastern Washington, 76-71, and the Sun Devils are currently on a four-game losing streak. Arizona State’s most recent loss came against Loyola Chicago, 77-59.

Arizona State has a 67.1 percent chance of winning against WSU, according to ESPN’s Basketball Power Index. Arizona State’s chances of being victorious are higher if WSU guards Noah Williams and TJ Bamba do not take the court. In the Cougs’ loss on Saturday, both Williams and Bamba did not take the court due to injuries. Williams suffered his injury during practice the day before playing Eastern Washington and Bamba was injured two games ago in the win against Winthrop.

“I think we’ll have them for Wednesday, but it’s too early to tell,” WSU head coach Kyle Smith said after the loss against Eastern Washington. “I think within this week we should be [good] if they trend the right way.”

If Williams and Bamba are not ready to take the court against Arizona State, WSU might run into the same stamina problems of the loss against Eastern Washington. In the loss against the Eagles, WSU allowed their opponents to mount a comeback in the second half after finishing the first half up by 12 points. Players such as guard Tyrell Roberts and forward DJ Rodman will have to keep their energy up against Arizona State if the Cougs want to leave Tempe victorious.

“We always have to play 40 minutes no matter who we’re playing,” WSU guard Michael Flowers said. “I feel like that’s one of our biggest challenges right now. We know it as a team, so at this point we just got to go out there and do it. Simple as that.”

The big man matchups will be an interesting talking point in the game. Arizona State’s inside game is led by senior forward Kimani Lawrence. So far this season, Lawrence is averaging 11.6 points per game and 8.9 rebounds per game. Lawrence will likely match up against WSU center Efe Abogidi. Abogidi has four inches of height on Lawrence, which will help in the post and obtaining rebounds for the Cougs. Abogidi is averaging eight points per game and five rebounds per game so far this season.

Roberts needs to maintain his scoring prowess in the away game. He leads the Cougs with 14 points per game. Roberts has also been perfect from the free throw line, making every shot he has taken from the line this season.

Roberts’ free throw excellence is matched by Arizona State’s DJ Horne who is also shooting 100 percent from the free throw line this season. Horne leads the Sun Devils with 11.9 points per game, shooting 48.3 percent from the court. Roberts is joined on the court by fellow guard Marreon Jackson. Jackson is a playmaker for the Sun Devils, responsible for over five assists per game. Jackson is also not afraid to shoot the ball himself, averaging 9.6 points per game.

One of the Cougs to watch this game is Mouhamed Gueye. Gueye is coming off an uncharacteristically poor performance against Eastern Washington, in which he scored no points and ran into foul trouble early. The away game will give Gueye an opportunity for redemption and the chance to prove he deserves a spot on the court.

So far this season, WSU is averaging 84.8 points per game, a whole lot higher than the 68.9 points per game averaged by Arizona State. However, if WSU cannot fix their poor field goal percentage of their previous game, Arizona State may be able to pull off the win without needing to score in the 70s or 80s.

The Cougs take the court against Arizona State at 4:30 p.m. Wednesday in Desert Financial Arena. Coverage of the game will be on the Pac-12 Network.