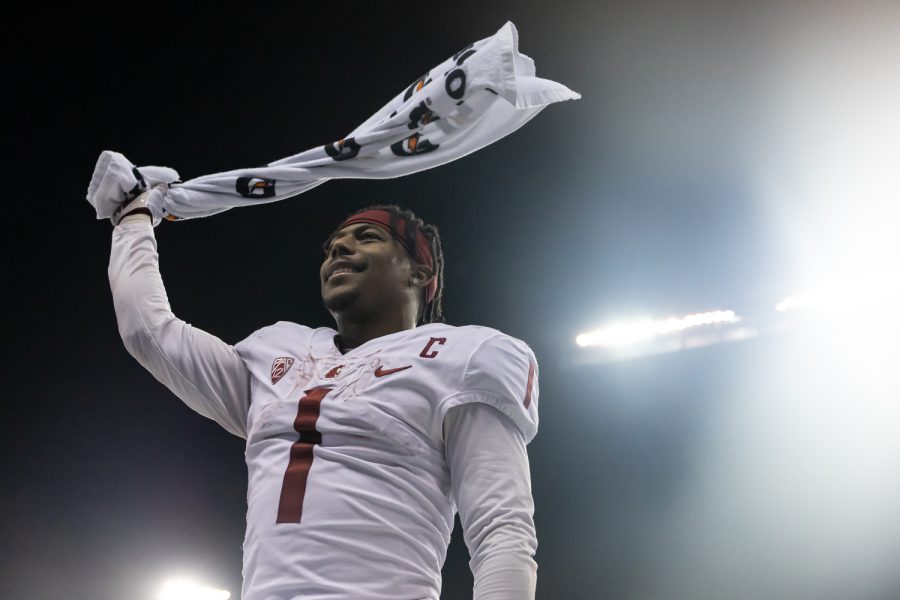 WSU wide receiver Travell Harris waves his towel in the air during the Apple Cup at Husky Stadium, Friday, Nov. 26, 2021, in Seattle.

WSU football finished the regular season two games over .500 at 7-5 after a tumultuous coaching year.

The Cougs started the season with formerhead coach Nick Rolovich who became the center of attention regarding WSU sports due to questions about the COVID-19 vaccine. Press conferences with Rolovich often focused on his vaccine status instead of focusing on the team’s ability to win games on the field.

The season can be divided into two sections. The first, when Rolovich was at the helm, and the second when former defensive coordinator Jake Dickert took over as interim head coach in late October.

Over the next three games, WSU continued to add losses to their record, going into week five against California with a 1-3 record.

WSU was able to right the wrongs of the early season games under Rolovich over the next three weeks, putting up three straight wins over California (21-6), Oregon State (31-24) and Stanford (34-31).

Up until the win over Stanford, Rolovich kept his vaccine status private and questions about whether or not Rolovich would receive the vaccine became more common as the final date of Washington’s statewide  vaccine mandate neared. Rolovich disclosed he requested a religious exemption from the vaccine, but this was not approved by the university.

As a result, WSU fired Rolovich from the head coach position, citing Rolovich’s choice to remain unvaccinated as cause for the termination. Four assistant coaches were also fired over the vaccine mandate.

Dickert would take over for the departed coach immediately following his termination.

Dickert took over as interim head coach for the 4-3 Cougars in late October. With Dickert now in charge, the Cougs faced a very difficult last part of the schedule, having to face multiple Top 25 teams such as BYU, Arizona State and Oregon.

All eyes were on Dickert in his first test against a very competitive BYU team. Against BYU, Dickert came up just short 21-19.

Next week, Dickert won the hearts of many Cougar fans with an upset win against then-ranked Arizona State, 34-21. The win was not only a big victory for Dickert, but also for WSU fans as Dickert showed he was capable of rallying the Cougs against an arguably better team at the time. The win also brought the Cougs’ record back to .500 at 5-5.

Dickert’s next challenge as interim head coach came with the No. 3 ranked Oregon Ducks. In the week leading up to the matchup, Dickert seemed poised and ready for the challenge. However, Oregon’s previous success this season continued against the Cougars, winning the matchup 38-24. The loss against Oregon brought Dickert’s record as head coach to 1-2.

Now with the hardest part of WSU’s schedule behind them, WSU focused on a somewhat easier opponent in Arizona. Against Arizona, WSU was victorious 44-18 and was the first time Dickert seemed in complete control of both the offensive and defensive units. The win brought Dickert’s record as head coach back to .500 at 2-2 and provided the Cougs with bowl eligibility, now with six wins on the season.

WSU faced off against their in-state rival, the Washington Huskies, to end the regular season.

WSU was in control from the opening kickoff, putting the first touchdown on the board with a rushing touchdown from Pullman favorite Max Borghi. Borghi ran straight into the record books against Washington and is currently tied for the most touchdowns in WSU history.

Before beating Washington in the Apple Cup this year, the Cougs had not hoisted the trophy since 2012.

Dickert was able to snap WSU’s losing streak with excellent coaching and kept tensions between the two teams under control.

WSU finished the regular season with a 7-5 record, a commendable result after so much adversity with the coaching staff.

The 7-5 Cougars finished second in the Pac-12 Northern Division,  just one game short of first place and a ticket to the Pac-12 Championship in Las Vegas.

After Dickert showed he was capable of coaching in Husky Stadium’s high-intensity environment, WSU Athletics announced that Dickert would become the next head coach for the Cougs.

Now holding the title of head coach, Dickert looks to lead the Cougs to a bowl game victory to end the 2021 season.

Under Dickert, the future of WSU football seems very bright. Hopefully WSU can have another positive season next year and may even have a shot of winning the Pac-12 Conference.