Book review: ‘One of Us is Lying’ by Karen M. McManus 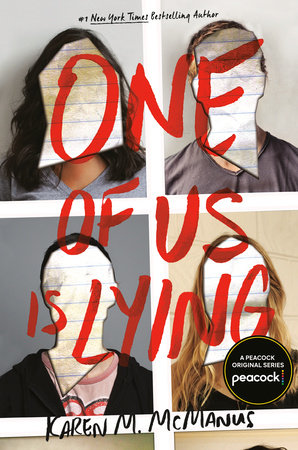 COURTESY OF ONE OF US IS LYING

"One of Us is Lying" offers readers a thrilling mystery with a twist at the end.

Warning! This review contains spoilers about “One of Us is Lying.”

I often struggle to find books I truly enjoy. They either have too much action and not enough character development, making it so that I don’t care about the characters, or the other way around. “One of Us is Lying” kept me engaged from the first chapter to the very end and I cared about the characters.

The book started with five students in detention at Bayview High School. One of the students, Simon, got a cup of water from the back of the room. As he drank it, Simon went into anaphylactic shock from a peanut allergy. His epi pen wasn’t in his backpack and there weren’t any at the nurse’s office. The paramedics took him to the hospital, but he didn’t survive.

There were four other students in the room at the time of the incident making them the main suspects of Simon’s death. The rest of the book was from the perspective of the four students as the homicide investigation happened.

One aspect I didn’t like about this book is how some parts were unrealistic. Simon created the “About That” app, which had information about who cheated with who, when someone was in the closet and other secrets people didn’t want their peers to know.

Although the book did mention Bayview’s principal is a big advocate for free speech, most schools would try to get an app like that shut down because it’s a severe distraction to the learning environment. The school administration wasn’t doing anything about the app though, and that just isn’t realistic in the real world.

One of my favorite parts about this book is how deep the character development is. Two of the characters who were in detention, Bronwyn and Nate, are the complete opposite of each other.

Bronwyn has amazing grades, is involved in many extraccuriculars and applied to Ivy League schools. Nate comes from a family where his dad struggles with substance abuse. His mom left and he makes money by selling drugs.

Nate offers Bronwyn a ride home on his motorcycle, which she reluctantly accepts, after detention on the day Simon died. As time went on, she began to enjoy Nate and their characters began to get closer.

With their lawyer’s guidance, the four students weren’t supposed to interact, text or hang out with each other. Nate gave Bronwyn a burner phone so they could talk and plan times to secretly meet up. When Nate got arrested for probable cause, Bronwyn found a pro bono lawyer to fight for Nate to get him out of custody. Toward the end of the book, they become a couple.

The book discussed important everyday topics most teenagers can relate to. One of the four students in detention, Cooper, was in the closet. He started dating a man named Kris when the investigators found a draft post on “About That” regarding Cooper’s sexuality that was supposed to be published, but never was.

The investigators had a conversation with Cooper about it and then he was outed to the whole school. During this time, he also told his family. Cooper’s father is homophobic and was very awkward toward Cooper for a while. Readers were able to see how Cooper navigated his father’s disapproval. This was a real-world topic many can sympathize with.

I believe a good book should evoke emotion from you in the end. “One of Us is Lying” did just that. The character development, action, important and relevant themes and the ending make this one of my favorite books.