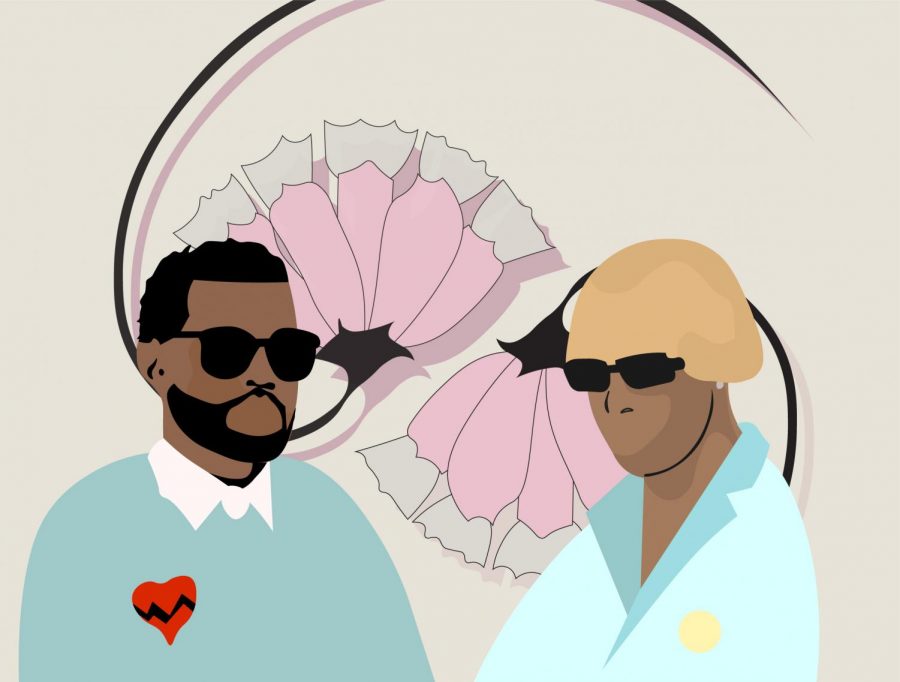 Artists Kanye West and Tyler, the Creator created some of the best tracks in 2021.

As The Daily Evergreen begins to finish its last two weeks of production for the semester, I want to take my last two articles to go over what I believe are the best pieces of music from the year. I am going focus on the top ten songs from 2021. Next week, I plan to create my list of best albums of 2021.

Tyler, the Creator’s smooth flows coupled with singing from YoungBoy Never Broke Again creates a relaxing atmosphere. The production on the track is incredibly smooth, reminding me of R&B ballads from the 90s.

While “Donda” was a disappointing release, the album supplies some of Kanye West’s best work. Everyone on the track drops great verses, and the beat is incredibly catchy and motivating. The song is the equivalent of everyone putting their fair share of work into a school project.

Going from relaxing to chaotic, black midi is able to make a messy composition sound structured. The track’s constant whirring of trumpets and string accompaniment shoots the listener into a state of alertness. The second half of the track then shifts to weird phrasing and synchronization to put the listener in an uncomfortable mood.

A friend of Phoebe Bridgers, Lucy Dacus showcases her incredible songwriting skills on this track. “Hot and Heavy” is a perfect blend of nostalgic love with an upbeat composition. The song reminds me of the alt-rock songs around the early 2010s my dad used to listen to all of the time.

One of the more experimental tracks on this list, the song “More” incorporates a weird guitar loop to melt the listener’s brain into a pile of mush. The song’s weird instrumentation with the vocals of Mimi Parker creates a wall of sound that will blast your eardrums out.

JPEGMAFIA is one of the only artists in the rap industry who is completely independent. Everything from the production, lyrics and music videos is created by himself and only himself. He has a godlike ability to create some of the most unique beats with only minimal production and an ear for good samples.

His track “HAZARD DUTY PAY!” is the best example of his use of sampling. The track is only on the offline version of the album, as the sample wasn’t officially cleared for release. It’s not on Spotify or Apple, but it can be found on YouTube.

Korean media has recently started to take an insane jump in terms of quality. Parannoul is an anonymous Korean college student who broke through this year with one of the best shoegaze albums of the year so far. The artist breaks the language barrier, with English listeners still able to connect to the vocalist’s lyrics regarding loneliness and depression. The song “Analog Sentimentalism” is a track crafted to perfection, with fast-paced drumming and whistling keyboard synth.

Black Country, New Road dropped one of the best albums of this year. While their album supplies listeners with loads of memorable tracks, “Track X” takes the cake. The quiet vocals are coupled with a looping guitar riff, trumpets and keyboards. While the track’s lyrics contemplate dark subject matter, the composition is stunning. The track’s instrumentation sounds like something straight from a Pixar film.

Listening to this track blew my mind away. Parker Corey’s production is a work of pure genius. The track sounds so broken and chopped up, like a corrupt audio file off of a computer. However, the track simultaneously sounds perfectly unified, and it is incredibly blissful. The extreme autotune of Nathaniel Ritchie’s vocals creates a collage of glitchy noise and harmony. Injury Reserve crafted not only a perfect song, but a perfect album to honor the death of their late friend, Jordan Groggs.

Godspeed You! Black Emperor is one of the most unique bands I have ever heard of. Since the late 90s, the group of over 10 musicians has put out some of the most stomach-turning work. Their overall sound can be defined as bleak, dark, and nihilistic. However, there is one element that they include in their work that brings their music to a whole other level … hope.

The track “OUR SIDE HAS TO WIN (for D.H.)” alone accomplishes more than a majority of the albums released this year. After listening to the entirety of their latest record “G_d’s Pee At State’s End!,” this track hits the listener like a freight train. Listening to the track almost made me cry — it is just that beautiful. I could write an entire article on this song alone, but I recommend listening to the song in its entirety to get the whole experience.