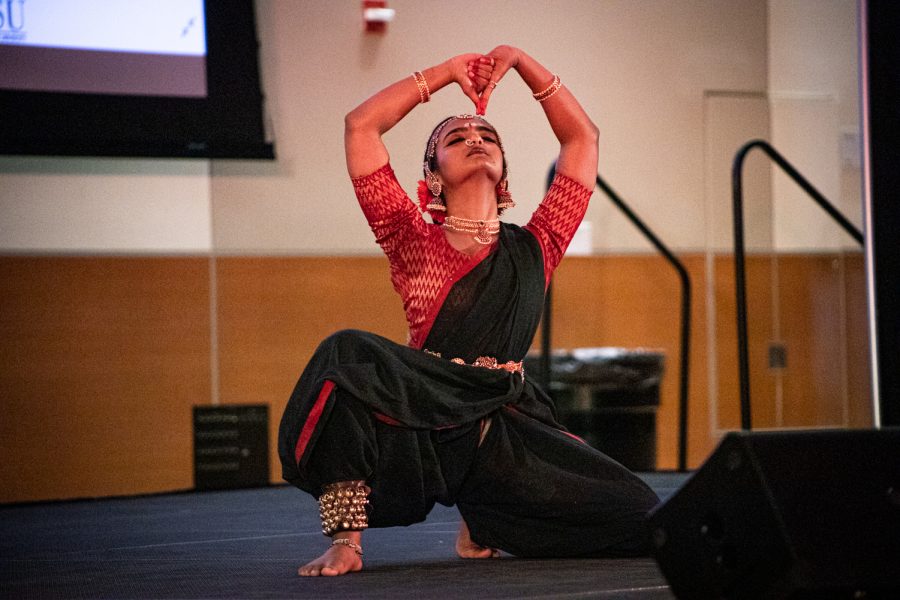 Mamatha Muralidharan performed a dance that pays homage to the Lord of Dance in India, Lord Shiva, on Nov. 18.

As the rain pounded on the Compton Union Building’s third-floor windows, a familiar bustle of people excitedly socialized after two and a half semesters apart.

At the International Student Council’s annual end of fall semester celebration, “Party in the CUB,” students, staff and community members enjoyed dances and entertainment as their stomachs filled with food from all over the world.

At 6 p.m. on Nov. 18, entertainment kicked off. After a few dances, a traditional song started to play. People slowly began lowering their forks and turned their attention toward center stage. Their eyes met a stunning display of red and gold dancing across the stage. The dance drew the entranced eyes of every person in the room.

Mamatha Muralidharan, mechanical engineering graduate student and former member of the Indian Student’s Association, said the Bharatanatyam performance paid homage to the Lord of Dance in India, Lord Shiva. She danced to the music, Shiv Tandav Stotra, with every ounce of energy she could give and stunned the crowd at every turn.

“Especially during COVID, I was waiting for a chance to perform, but I never got it for one whole year,” Muralidharan said. “So I’m extremely happy [and] exhilarated that I have a chance finally to perform.”

As a graduate student in the last year of her thesis, she said she was ecstatic to perform and try the different cultural dishes from around the world. She was very pleased with how her dance went and that she got to meet people in person again.

Yihui Fang, International Student Council president, said she could not see the performance before the event but was bouncing with anticipation to see the dance during the festival.

“During the actual event, I [was] like, ‘oh my gosh,’  I thought, I would literally pay for a ticket to watch this show,” Fang said. “They are all so professional.”

The annual event “Party in the CUB” was previously called “Party in the Park” because in past years the ISC held the end-of-semester party in Reaney Park and collaborated with the Resident Student Organization on campus. However, Fang said the event was moved inside due to weather conditions.

Inside, students were still able to enjoy the event and get a little taste of home. An hour before the performances started, the ballroom was flooded with WSU students weaving their way through the crowd to different vendors.

Each person who walked up to the food had a glimmer of excitement in their eye. Whether the food was comfort from home or a brand new experience, the smiles that bloomed conveyed one thing: deliciousness.

Immediately after entering the ballroom, the Japanese Student Association vendor table came into view with a line wrapping around tables and an energetic crowd looking at the menu. Throughout the night, dozens of people lined up to try the Japanese dishes until they were sold out.

“It’s nice that we are able to come and share this with everyone. I hope they like it. We made yakisoba, which is like fried noodles, and we also made takoyaki, which is like little octopus balls,” JSA President Andrew Cho said.

Across the ballroom, the Korean Student Association ran with the “Squid Game” popularity and decided to share their culture in a fun way with Dalgona cookies and coffee. KSA president Chanu Hwang said the stock of cookies they made took eight hours to complete, and the snack was very popular with the crowd.

“‘Squid Game’ is popular right now, and I’m proud of it,” Hwang said.

Throughout the night, traditional and light-hearted dances, beautiful music and poetry soothed the audience. After the performances, the event held a karaoke portion for people to participate. Individuals lined up and sang all night long, ending the event after numerous song changes.

“They enjoyed themselves all night and that’s pretty awesome,” Fang said. “It was really amazing seeing how many people [were] contributing and how they actually enjoyed the karaoke.”

If you missed your chance to “Party in the CUB” this semester, the ISC will hold a week-long event near the end of the spring semester.