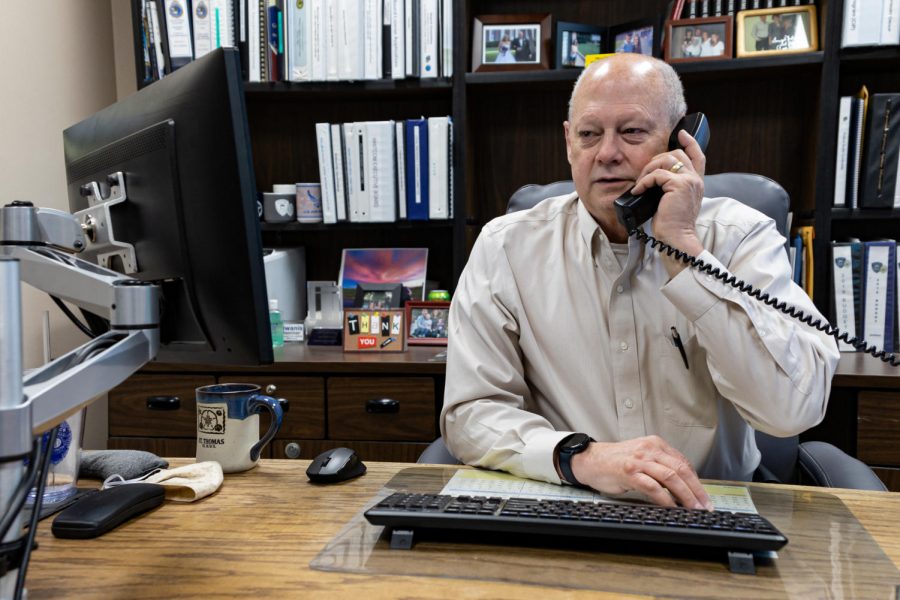 Pullman Police Chief Gary Jenkins said the only way someone can be pulled over is if there is probable cause that a violent crime occurred, a sex offense occurred, or the individual is driving under the influence.

HB 1054 made it so Washington state police departments now must have less-lethal launchers, restrictions for pulling someone over and can no longer use chokeholds or neck restraints, Pullman Police Chief Gary Jenkins said.

Prior to HB 1054, Pullman PD was successfully using the lateral vascular neck restraint, which restricts blood flow to the brain by applying force on the sides of the neck. Now, officers potentially are using more force with strikes, kicks, punches, takedown techniques and a taser, Pullman PD Sgt. Aaron Breshears said.

“It’s a tool from our toolbox that’s been taken away, and we miss it,” Breshears said. “The potential for injury to the suspects, in our experience, potentially has gone up now.”

Under HB 1054, the only way someone can be pulled over is if there is probable cause that a violent crime occurred, a sex offense occurred, or the individual is driving under the influence, Jenkins said. If Pullman PD attempts to pull someone over and the person does not respond, officers are unable to chase the person.

The projectile is very similar to how being shot with a paintball gun would feel, Breshears said.

The goal of the FN 303 launcher is to not kill someone, but there’s always the risk of it happening if the projectile hits a vulnerable area, Jenkins said.

Pullman PD spent approximately $1,000 on each of two FN 303 launchers, he said. In addition to that, they also had to spend money on ammunition.

At this time, Pullman PD is keeping the 40mm impact launchers in its armory, Jenkins said.

“We believe that in the next legislative session, there will be some changes to the legislation that resulted in unintended consequences. There’s some likelihood that the definition of a military weapon may be revised that will allow us to use our previous 40mm impact weapons,” Jenkins said.

Officers have also had to change their approach to how they work with people who are having a mental health crisis. Before HB 1054, officers would potentially use force to get the person to the hospital, Breshears said. This prevented the person from hurting or killing themselves. Officers are now unable to do that because they are not able to use force.

Now, the only thing officers are able to do is encourage them to speak to a mental health professional, he said. Suggesting resources only helps though if they are in a place where they are receptive to getting help.

HB 1054 has made some officers feel less safe because force options were taken away, he said.

“If you take away a tool, you’re going to expect there to be a less desirable result. The outcome is not going to be as good as if you had all available tools,” Breshears said.