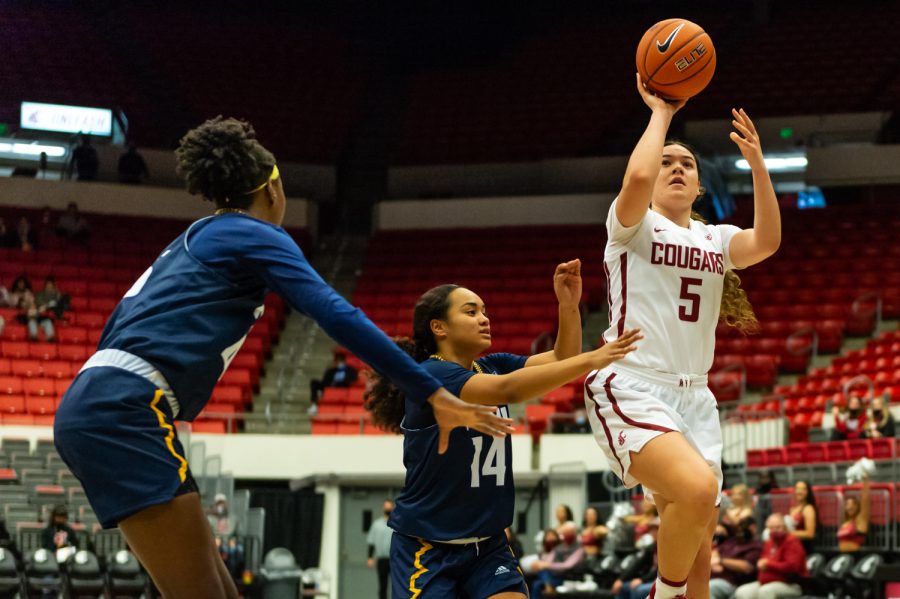 WSU guard Charlisse Leger-Walker (5) jumps for a layup during a college basketball game against Northern Arizona University on Nov. 12, 2021, at Beasley Coliseum.

WSU women’s basketball is set to return to the friendly confines of Beasley Coliseum this week as they welcome San Francisco before heading back on the road to face UC Davis.

The Cougars face off against San Francisco at noon on Thursday. After suffering a loss to No. 5 North Carolina State at the Baha Mar Pink Flamingo Championship in the Bahamas, the Cougars plan on applying what they learned for Thursday’s game. This will be the first time these two teams have faced each other since 2018 when the Cougars secured a 30 point victory over the Dons 91-61.

Historically, the Cougars have been dominant in their series versus the Dons winning the seven matchups dating back to 1983. The Cougars’ offense historically has been dynamic and moved at a fast pace, averaging 78.8 points against the Dons. The young talent that surrounds the Cougars is essential in order for the Cougars to secure the win.

Despite only scoring three in their loss to North Carolina State, Charlisse Leger-Walker played a key role as she was second in rebounds for the Cougars, tallying six.

Her sister, Krystal Leger-Walker continues to be consistent in assists, as the fifth-year student had a game-high of four assists. Even though the offense was struggling against North Carolina State, Leger-Walker knew who to pass it to as her vision on the court proves to be second-to-none. She currently ranks second in the Pac-12 with 5.0 assists per game.

Bella Murekatete continues to make a statement each game as she is efficient both offensively and defensively. This season, she currently has the most rebounds in a game with 15 against Northern Arizona while having 13 points to secure a double-double. She is also dynamic on the defensive end; she currently ranks second in the Pac-12 with blocks at 3.6 and rebounds with 9.2.

The Cougars enter Thursday’s matchup versus San Francisco ranking second in fewest turnovers as a team in the Pac-12. The Cougars have only turned over the ball 80 times this season, which is also the 64th-lowest total in the NCAA. The Cougars also rank third in steals per game only behind Colorado and Arizona.

Following their game against San Francisco, the Cougars travel to California as they match up against UC Davis. Saturday’s 4 p.m. tipoff will mark the first matchup for the Cougar since 2018, where they suffered a loss to the Aggies 75-62. However, history was made that night as Borislava Hristova surpassed April Cooks for 11th on the Cougars’ all-time scoring list. Hristova would go on to take the top spot before leaving Pullman.

The Cougars are currently on a two-game losing streak against the Aggies. However, this Cougar team is more than capable of securing the win. Charlisse Leger-Walker continues to lead the way for the Cougars as she is currently sixth in scoring for the Pac-12 averaging over 14.4 per game.

Murekatete is also just outside of the top 10 in scoring as she is currently tied for 11th averaging 13.0 points per game.

Krystal Leger-Walker is an important piece to achieve the victory for the Cougars. She has collected at least one assist in 44-straight games, including her time at Northern Colorado. In each game, she helps get the ball moving for the Cougars, which leads to momentum for the offense.

As a team, the Cougars have done a better job with ball control and dominance on the boards as they currently rank fourth in rebounds secured. With dominance in rebounds caused by Murkatete and Charlisse Leger-Walker, the Cougars are able to move at a fast pace and keep their dominance on both the offensive and defensive ends.