Killer deals without killing the planet

Community, sustainability back in fashion at The Killer Clothing Collective 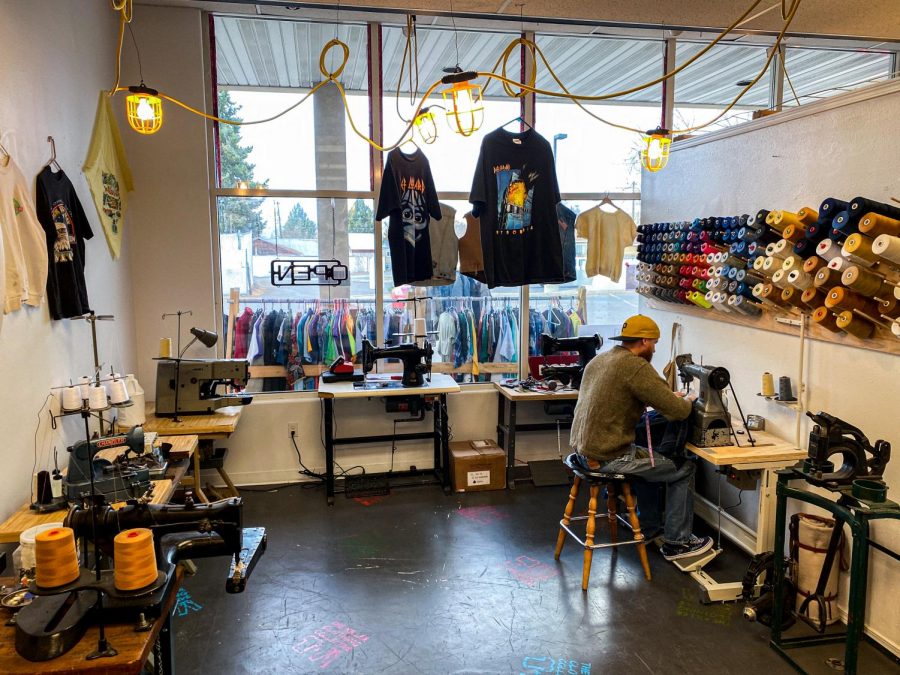 Co-founder Patrick Brown-Hayes works at his sewing machine at the Killer Clothing Collective in Lewiston, Idaho.

Jordan Peck and Patrick Brown-Hayes are shaking the foundations of the fashion industry one piece of upcycled clothing at a time.

The co-founders of The Killer Clothing Collective opened their doors to the community of Lewiston, Idaho in January of this year.

Brown-Hayes said they hoped — and still hope — to connect with people through their love of fashion; most importantly, sustainable fashion.

“As I’ve gotten older and the deeper I’ve gotten into fashion, I’ve … made it one of my core values to really look deeper into what fashion’s purpose is in peoples’ lives,” Brown-Hayes said.

Some may argue that fashion is the one part of our lives that does not affect anyone else. It is the color we like, the fit we feel best in, the pattern or cut that makes us feel most stylish.

Brown-Hayes disagrees. He said research shows the fashion industry is a major contributor to waste across the world, so those colors, fits, patterns and cuts do make an impact. As consumers, our buying power can impact what companies and business models succeed over others.

“This collective, this idea, is based around asking the question, ‘How do we actually create a system of change within fashion and how do we do it within the core values of our company?’” Brown-Hayes said.

Shops like The Killer Clothing Collective are redefining the typical business model that monopolizes the fashion industry today.

“A circular business plan is conception to conception,” he said. “It’s based around how we keep revolving the wheel, every time, before we actually get to an end spot. So that’s why we have so many offshoots within our brand.”

Those offshoots include vintage, upcycle and custom design. Brown-Hayes said those aspects, as well as the shop’s layout, allows both customers and employees to create a community unlike what most shoppers see nowadays.

He said the design process is usually kept tucked away in the backroom for most of those in the industry. But the customers’ lack of connection to how their clothing is made is part of the fashion industry’s sustainability problem. At The Killer Clothing Collective, this lack of transparency is one of the issues they are trying to address.

“The reason we have our design space in the front rather than the back of the shop is that we’d like to give people access to what is usually a very closed system,” Brown-Hayes said.

If you want to watch your jeans be repaired, upcycle a shirt or even create a shirt, you are part of the process when you watch how it is actually done, he said. Providing this transparency in-shop is a simple approach to tackling a massive problem.

Houston Keane has worked at The Killer Clothing Collective for two months. In that short time, he said he has seen the impact Brown-Hayes and Peck are having.

“You can’t go into a big store and just sit and talk with the people who are working,” he said. “I was able to come [into the shop] and hang out and chat with them. Being able to sit here and watch Patrick create 15 pieces of clothing that he designs, like an artist creating artwork, was just cool.”

The artistry of the shop’s owners goes farther than their clothes. Instead of a plain layout with hundreds of similar clothes for shoppers to sift through, try on and buy, Brown-Hayes said The Killer Clothing Collective focuses on providing a unique space.

When you walk through the door, the piles of jeans to your left may seem careless, but the vintage Levi’s are organized by size for shoppers’ convenience.

The stands of jackets in the corner are not what you might expect — instead of 20 of the same design in different sizes, each is a different age, found in a unique thrift store or sold in bulk to Brown-Hayes. He said each piece has its own background story.

Above your head, classic graphic t-shirts — which may appear like run of the mill shirts — are actually decades old or possibly worn by someone crazy cool or famous. And the shop has the paperwork to prove it.

“I got to sit here and talk with [Brown-Hayes and Peck] for hours about where they got a piece and who wore it,” Keane said. “They have information on who wore this pair of pants from the 1930s. It was just really interesting to me.”

The longevity of clothes is a reality many consumers, and even fashion industry big wigs, have forgotten. Shops like The Killer Clothing Collective are not riding the coattails of the new trend of the decade, they are reminding consumers of the importance of thoughtful shopping.

Though it is trending now, sustainability is not a fad. For many, it is a basic value they consider in every part of their lives. Some, like Brown-Hayes and Peck, even start businesses so they can share their passion with others.

“If you’re going to make an impact on the world around you, you can’t just say that you can do something,” Brown-Hayes said. “You actually have to do it.”