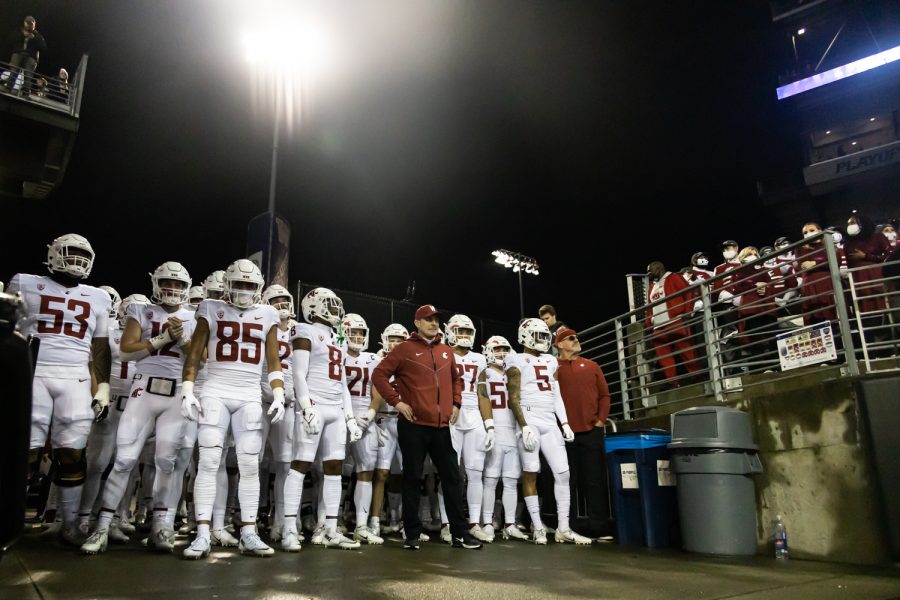 Last week, the Cougars won the Apple Cup for the first time since 2012 with a dominating score of 40-13 in the contest.

Dickert went 3-2 after Rolovich was relieved of his duties, with wins against Arizona, Arizona State and rival Washington.

His two losses? A close home loss to No. 12 BYU in his first game as interim head coach and a two-touchdown loss to Pac-12 North champion No. 10 Oregon.

The day after the Apple Cup victory for WSU, Cougar fans were excited to learn that the “interim” part of Coach Dickert’s title had been officially dropped, and the hunt for Rolovich’s long-term placement was over.

Dickert became the 34th head coach of WSU on Saturday, signing a 5-year contract, according to a press release from WSU Athletics.

The permanent signing of Dickert could not have come at a more perfect time.

Cougar fans across the country are currently riding high after a historic Apple Cup win, after a 1-3 start and then finishing 7-5, winning six of their last eight games.

To sign Dickert right after the battle of the two FBS programs in Washington and winning that battle in Seattle not only means the future is brighter on the Palouse but also that the present-day players are looking to win the North division after finishing second this year.

Seeing the excitement of this team after the biggest win in program history since 2018 can never be matched, and the timing of Dickert being locked in as our new head coach means something is brewing on the Palouse.

So, what does Dickert being the next head coach of WSU really mean?

It means a lot of new things for football.

The recruiting battle in this state just got interesting with a new head coach and a new mindset within WSU football.

The Cougars are now more attractive in terms of the future than Washington, with a culture that has finally brought the Apple Cup back to Pullman after nine long years.

Right after the firing of Rolovich, Dickert was not even expected to win this role after the season.

Everybody really dismissed Dickert at the beginning of his short 2021 season because of the situation in which he became head coach for the Cougars.

However, people really started to consider Dickert as the head coach of WSU after the Arizona State game, a game where WSU forced five turnovers against the dynamic offense of the Sun Devils.

On the season, the Cougars finished third in the nation and best in the Pac-12 conference in turnovers gained.

With Dickert being the former defensive coordinator and now head coach, the WSU defense is now known as the staple of WSU football after years of being an offensive machine.

The Cougars’ offense is still productive, with the blossoming of sophomore quarterback Jayden de Laura being one of the, if not the, best quarterbacks in the Pac-12.

Along with de Laura comes one of the best receiving rooms in the Pac-12, with fifth-year wide receiver Calvin Jackson Jr., redshirt senior Travell Harris and freshman De’Zhaun Stribling getting a majority of the receptions on the season.

So, for people who were skeptical of the Dickert offense during his run, he put up 40, 44 and 34 in all of his wins.

The future of the Cougars will only get brighter and brighter, and yes, this year did not result in a division title, even though WSU was just a game away.