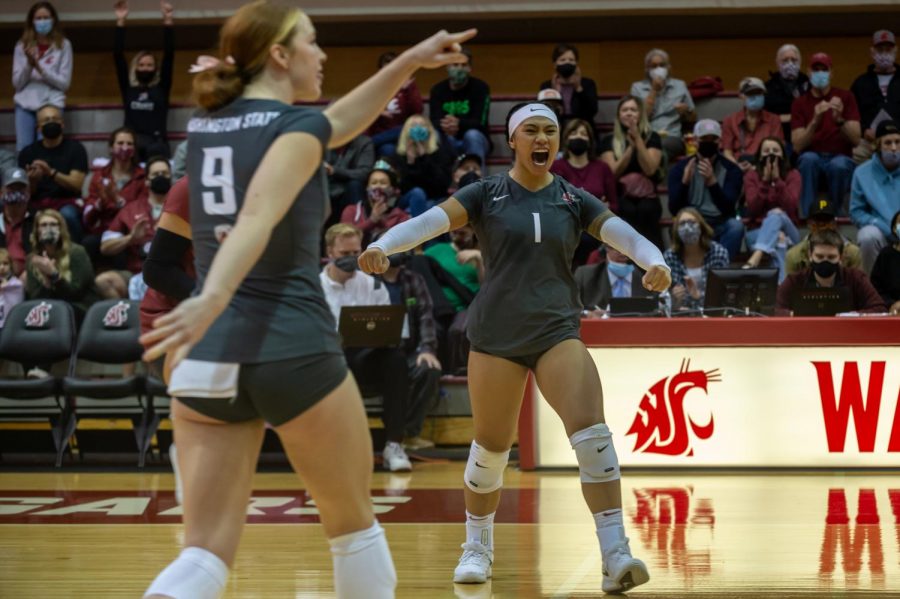 The Cougar volleyball team is dancing for the sixth year in a row. No. 22 WSU won an at large bid and will be playing the Northern Colorado Bears at 12:30 p.m. today in Waco, Texas.

WSU is going into the tournament with 13 wins in the Pac-12, which is the most wins under WSU head coach Jen Greeny. Overall, the Cougs have 19 wins on the season.

Greeny has been at WSU for 11 years; six of those have been winning season.

The Cougs have missed junior outside hitter Pia Timmer, who was injured in the match against Stanford in November. Timmer is expected to play in the tournament with the Cougs.

Timmer has been the top offensive player for WSU this season with 348 kills on the season. She also had a career-high of 31 kills in the first match against Washington, which WSU won in five sets. Timmer has a hitting average of .225 and 939 total attempts behind the net. She also has 36 aces on the season. The team is looking forward to having Timmer back as they head into the postseason.

Freshman opposite Katy Ryan, who was named to the Pac-12 All-Freshman team, has been a force for the Cougs behind the net. Ryan has 229 kills on the season with a hitting percentage of .315. Ryan has a bright future with Greeny and WSU.

All-American redshirt junior setter Hannah Pukis has also had a big season for the Cougs. Pukis has 97 kills on the season while also recording 1130 assists. She also has 284 digs on the season, with a season-high of 18 in a match against Purdue early in the season. Pukis has also been hitting well behind the line and has 257 career kills with a hitting percentage of .228. This season she has 19 aces.

Fifth-year outside hitter senior Penny Tusa will be making her last NCAA tournament appearance in crimson and gray. Tusa leads the Pac-12 with aces. She also broke the WSU career records for aces and most matches played. Tusa has 40 aces this season alone. She also has 182 kills. Tusa has been a foundational player for the Cougs and Greeny since she arrived in Pullman.

WSU also has redshirt junior Kalyah Williams, who has also been a dominant player for WSU. She has 246 kills on the season with a hitting average of .276. Williams has two errors on the season as well. She has been a big blocking assist behind the net for WSU. Williams has also been one of the most improved players on the court and could be a major player to watch in the tournament.

The Cougs and Bears have placed twice in program history, once in 1981 and 2007. WSU has won both matches and is 2-0 against the Bears.

If the Cougs win, they will advance on to play the winner of No. 6 Baylor and Texas A&M-Corpus Christi at 7 p.m. tomorrow night.

The game will be live on ESPN+.