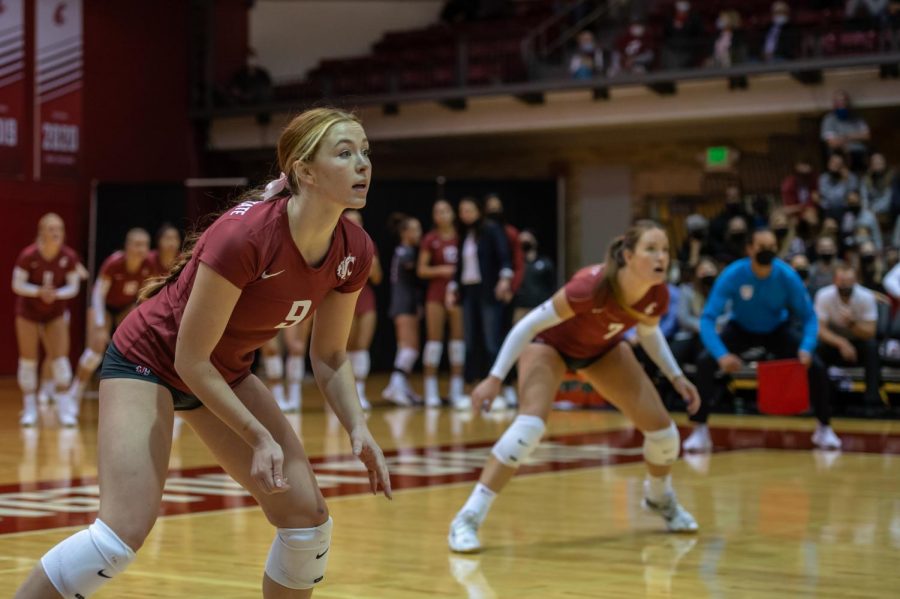 WSU setter Hannah Pukis (9) and outside hitter Pia Timmer (7) prepare for an incoming spike during a college volleyball match against UCLA on Oct. 3, 2021, in Pullman.

Four WSU volleyball players and head coach Jen Greeny were recognized by the Pac-12 this week.

For the second time in her career, Greeny was named Pac- 12 Co-Coach of the Year. Greeny was voted on by the rest of the coaches in the Pac-12. Magda Jehlarova, Pia Timmer and Hannah Pukis were given all-conference honors, while Katy Ryan was named to the all-freshman team.

Greeny led the Cougs to 13 conference wins, which is the most in her 11-year career. She coached the Cougs to still be in the hunt for the Pac-12 title until the loss against Washington in the final match of the year.

Greeny has also led the Cougs to the longest NCAA Tournament appearance streak in WSU history. This is also the 12th time Greeny has made a postseason appearance as a player, assistant or head coach.

Jehlarova earned her third-straight all-conference award for her spectacular defensive performances behind the net for the Cougs. She finished the season third in the country in blocking with 1.45 blocks per set and 1.64 in Pac-12 play.

She currently has 159 total blocks, which is the 10th most in a single season in program history. Jehlarova is also second in the nation for blocks. She finished the season with a hitting average of .361 and is fourth in all-attackers in the conference averaging 2.40 kills per set.

Timmer has missed the final weeks for the Cougs due to an injury. However, Timmer had a killer season for the Cougs. The outside hitter earned her second straight appearance on the Pac-12 honors list. Timmer was also named Pac-12 offensive player of the week twice this season. She was named the AVCA Division 1 national player of the week, which was only the second time this award has been given to a WSU player in program history.

Timmer leads the WSU team with 348 kills. She is ranked fifth in the Pac-12 for kills per set at 3.91. Timmer is also one of the best servers in the country with 36 aces and .4 aces per set, ranking first in the Pac-12.

Pukis was the key to the Cougs success on the court this season. The captain was named to her third straight all-conference honor. She is one of the best all-around setters in the country. Pukis had 1,130 assists, 97 kills, 19 aces, 284 digs and 65 blocks. Pukis finished second in the Pac-12 in assists and 32nd in the country. Pukis moved up to the top 10 in program history with assists to number seven.

Rounding out the Pac-12 honors for the Cougs is Ryan, who is following in the footsteps of Timmer, Jehlarova and Pukis. Ryan carried a large part of the offensive load for the Cougs this season with 229 kills and averaged 2.12 kills per set with a very impressive .315 hitting average.

Ryan recorded six double-digit kill matches this season with a season-high of 19 in the match against Washington. Ryan also started to become a major defensive player with 70 blocks and 45 digs.