Students encouraged to volunteer, use food pantry when needed 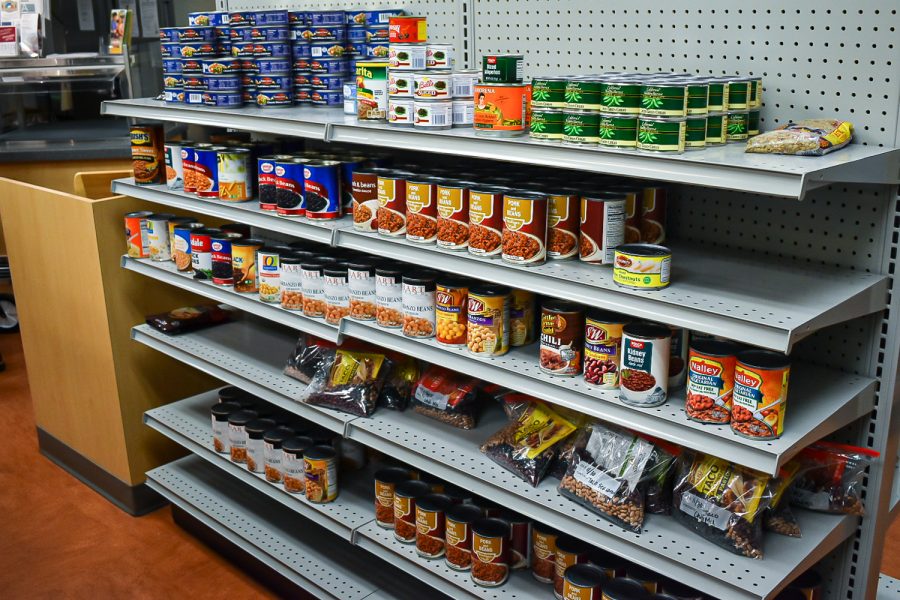 Fresh fruits, vegetables, and nonperishable food are available to all current students at WSU in the Cougar Food Pantry located in the Compton Union Building.

The Cougar Food Pantry has been working from the ground up since its opening in August — and has since served 3,700 visitors at its location in the Compton Union Building.

Shae McCarron, junior medical anthropology major, is the food pantry director and has been involved with it since its creation.

“The goal is to abolish the stigma,” McCarron said. “We just want to make sure that students are able to fulfill the absolute necessity of having something to eat since they already work really hard.”

The food pantry is open from 10 a.m. to 6 p.m. Monday through Friday and 10 a.m. to 2 p.m. Sunday. It is closed Saturday, as employees noticed fewer students using it that day, McCarron said. All current WSU students are eligible to access the pantry with their CougarCard.

Among the most popular items at the food pantry are the fresh produce items, such as potatoes, onions and other vegetables, they said.

“I would say that aside from your basic nonperishables and canned goods, our fresh produce are our most popular products,” McCarron said.

McCarron said they believe produce is often sought out by students because it can be hard to find a lot of the time, and the produce is stocked fresh at the food pantry.

The food pantry was closed for Thanksgiving break starting on Thursday, but still held an event before the holiday, McCarron said.

“On Saturday, we hosted Tom’s Turkey Drive. Last year, we had 80 turkey dinners with the turkey and the gravy and the mashed potatoes,” McCarron said. “This year, we gave out 104.”

McCarron said the food pantry was open for the beginning of Thanksgiving break but with shortened hours.

They said there was enough food for everyone who came to the event, and they have not had a problem with funding or keeping the food pantry stocked.

“We had too much,” McCarron said. “In fact, that $5 you pay in your tuition to fund it, we still have enough money from that alone, so we’re not hurting for money.”

McCarron said that while they are happy many students came out for their Thanksgiving event, they still want more students to come to the food pantry in the future.

“There are tons of students who come in and think we’re still the Union Marketplace and didn’t even know we were here,” McCarron said. “I hope more students will realize that we are a resource they can utilize.”

Junior accounting major Paolo Macariola is a volunteer at the food pantry and helped out for the first time last November.

The majority of the volunteer work is keeping the pantry stocked and cleaning when needed, Macariola said.

“When we unloaded stuff on Wednesday, that was the last truck before Thanksgiving,” Macariola said. “It was a lot of stuff you would need for Thanksgiving like breadcrumbs.”

Macariola said he will most likely volunteer again in the future and would recommend others to do the same. Students should use the food pantry, as well as volunteer if they feel inclined.

“Volunteer positions are open,” McCarron said. “Many students don’t know about us so they can come in and get food.”