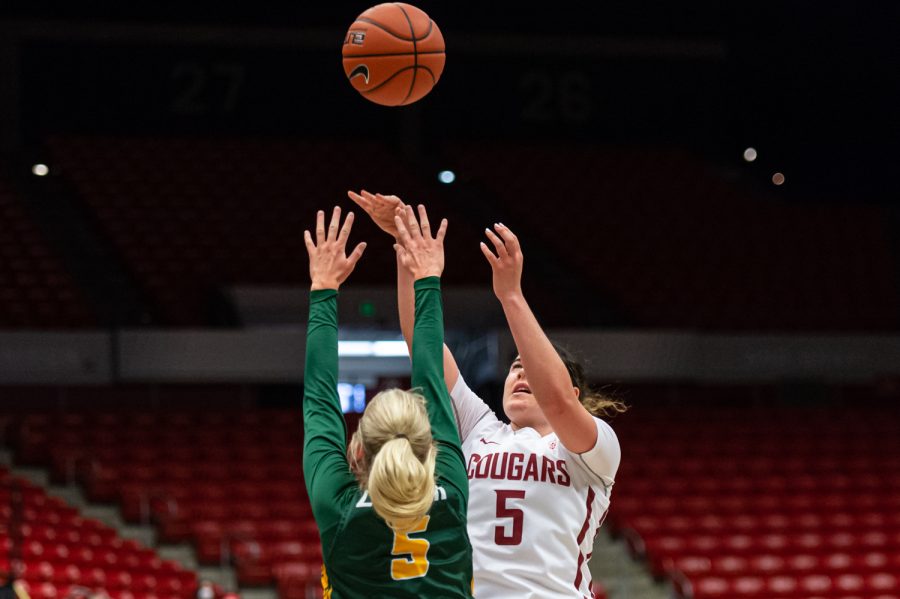 WSU guard Charlisse Leger-Walker (5, right) shoots a three-pointer during a college basketball game against the University of San Francisco in Beasley Coliseum, Dec. 3, 2021.

The Cougars in the first quarter were struggling a little as they were down 16-11 to the Dons. Shot selections and layups could have been better for the Cougars, but in the second quarter, the Cougars fought back as they played better defense and shot better behind the arc to give them a 30-27 lead heading to halftime. The Cougars had a strong second half as they scored 42 compared to in the first half where they scored 30.

WSU improved as a team from their last game against No. 5 North Carolina State in the Baha Mar Hoops Pink Flamingo Championship as the Cougars were dominating on the offensive and defensive end.

After her 13-game double-digit scoring streak ended in the Bahamas, Charlisse Leger-Walker led the Cougars in scoring with 27. Her 27 points were the most scored by a Cougar this season.

Bella Murkatete had an impressive game for the Cougars, as well, as she scored 16 points. Her dominance in the paint was showcased as well with eight rebounds. Ula Motuga had a great game earning 12 points and leading the Cougars in rebounds with nine. The Cougars defense was impressive this game as well, as they had 22 points off of turnovers and made the Don’s offense crumble.

“I’m excited that we got ourselves straight a little bit in the second and third quarters,” WSU head coach Kamie Ethridge said. “I think when we got more physical the game really changed for us.”

The Cougars head down to California to face off against UC Davis on Dec. 4th.