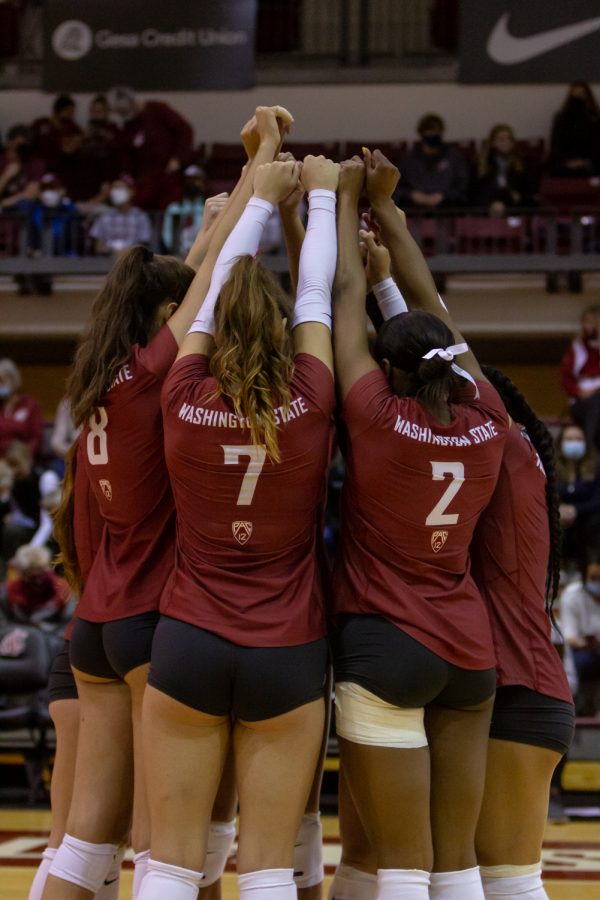 The WSU women's volleyball team comes together before the first set against California, Sunday, Oct. 24, 2021, in Pullman.

The Cougar volleyball team’s season is over after a loss to No. 5 Baylor in the NCAA Tournament second round, falling to 20-12 on the season.

In the first set of Friday’s meeting with Baylor, the Cougs got an early jump with junior middle blocker Magda Jehlarova who scored four of the Cougs’ first five points. The Bears bounced right back and soon led the Cougs 15-13. WSU fought their way back into a lead. After failing to capitalize on two set point opportunities, the Cougs dropped the opening set.

In the second set, the Bears continued to control the match. However, freshman Katy Ryan and Jehlarova once again proved to be a dynamic duo, recording three kills and bringing the Bears to a one-point lead. That was the closest the Cougs would get as Baylor would pull away to take the second set.

During set number two, head coach Jen Greeny put junior outside hitter Pia Timmer into the match. She recorded a kill, which was her first one in a month since being injured in the second match against Stanford.

With WSU against a wall, the Bears and Cougs went back and forth as both sides had early kills. Aregentina Ung and Ryan gave the Cougs a brief lead at 9-8. The Bears put a stop to this, however, and had a couple of aces to stop the Cougs from taking over the set. Ryan recorded five kills in the first 15 points. This was the last time the Cougs led.

The Bears came out swinging with five consecutive points which put WSU in a hole. The Cougs did come back to be within two of the Bears. This would not be enough, however, and the Cougs fell in three sets.

Ryan was named Player of the Match with 12 kills and a hitting percentage of .500. She also had three blocks to the match.

One day prior to the match against Baylor, WSU had defeated Northern Colorado in three sets in the first round of the NCAA Tournament.

The Cougs handed head coach Jen Greeny the ultimate birthday present with the win over the Bears. The Cougs moved to 20-11 on the season with the win.