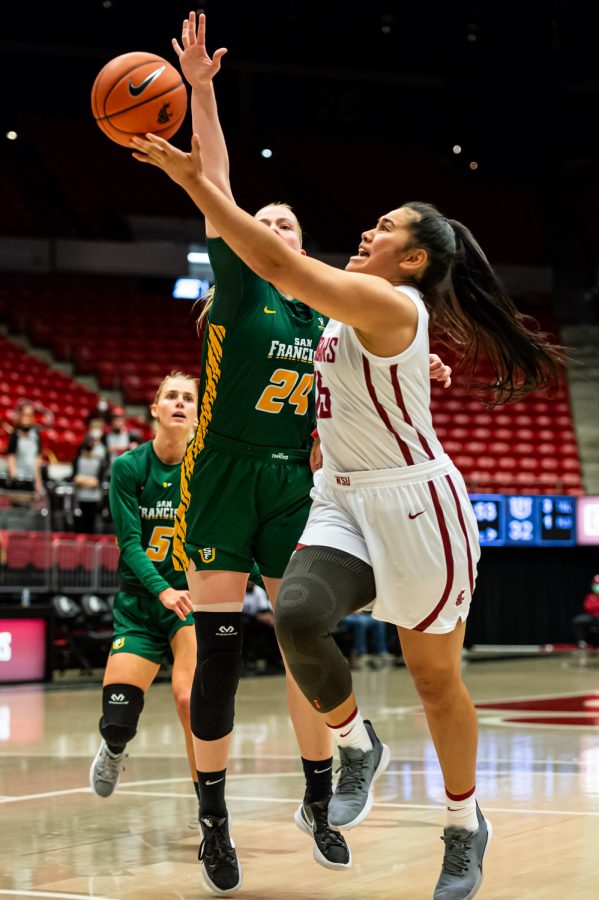 WSU forward Ula Motuga (15) jumps for a layup during a college basketball game against the University of San Francisco in Beasley Coliseum, Dec. 3, 2021, in Pullman.

The Cougars secured their sixth win of the season with a 71-49 victory against UC Davis on Saturday.

With the win, the Cougars moved to 3-3 all-time against UC Davis. WSU looked very balanced as they outscored the Aggies in every quarter of play and were able to dominate offensively and defensively.

“I felt really good about our team top to bottom, from start to finish,” head coach Kamie Ethridge said. “Just came out with a great mindset, feels like we took the last couple days to get better and it showed up on the court.”

Bella Murekatete, Charlisse Leger-Walker, Krystal Leger-Walker and Michaela Jones all scored in double digits. The Cougars as a team shot 45.2 percent on the court against UC Davis while shooting a season-high 10 3-point field goals. Defensively, the Cougars showed strength as they forced the Aggies into 20 turnovers and transitioned the turnovers to points, scoring 25 off the mistakes made by their opponents.

Charlisse Leger-Walker secured 13 points, while her sister added 11 points and had a team-high of five assists. Charlisse currently is ranked fourth in the Pac-12 in scoring averaging 16 points per game and Krstyal is ranked second in assists averaging 3.4 per game.

Jones scored a career-high 11 points coming off the bench for the Cougars. Both she and Krystal Leger-Walker hit three shots from behind the arc which was a team best.

Ula Motuga was involved in every way for the Cougars, as she scored seven points, earned four rebounds and handed out three assists in 27 minutes of action.

This was a good game for the Cougars as everyone on the team played a pivotal role in the win over UC Davis.

“I’m really happy for our team on getting this win,” Ethridge said. “I thought we played a complete game. We had a lot of spread-out scoring, and I thought Ula was really great for us. Krystal had a great game, and the bench did much better. I felt good about bringing people in and out of the game. It’s a dominating win on the road against a very good team.”

The Cougars head off to Spokane as they face off against the Gonzaga Bulldogs on Dec. 8. The Cougars look to improve their matchup history, as they are currently 5-10 against the Bulldogs.