Facts about this iconic Christmas creature may surprise you 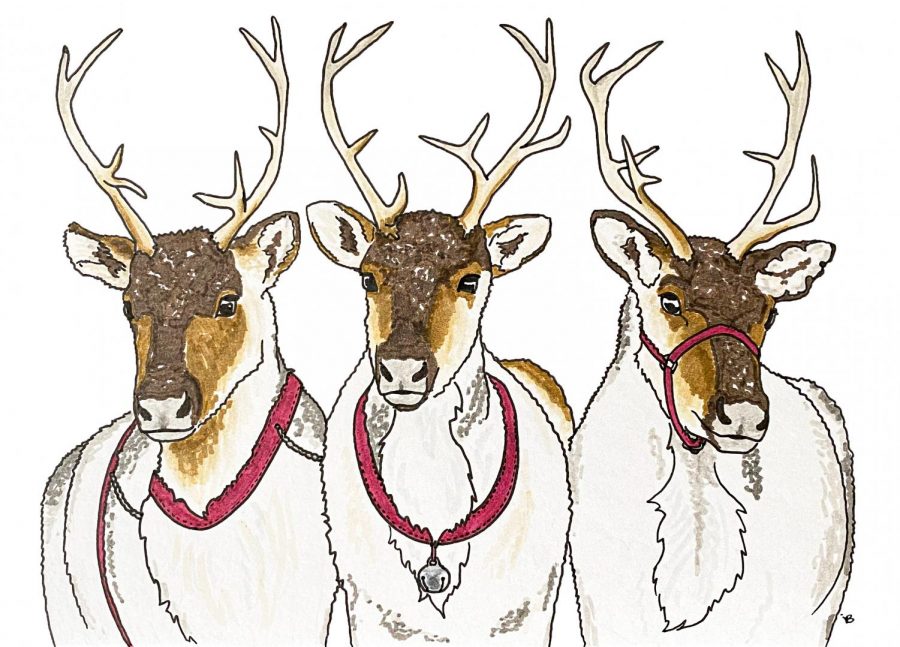 Reindeer have been a symbol of the Christmas season for decades, but how much do you really know about them? Quiz yourself to find out!

Question 1: True or false: Reindeer and caribou are the same species.

A: Northern Europe and North America

B: Antarctica and the Arctic

Question 3: True or false: Reindeer really can have red noses.

Question 4: Reindeer can swim at speeds of up to

Question 6: What makes up 90 percent of a reindeer’s winter diet?

Question 7: A bull reindeer’s antlers can weigh how much?

Question 8: True or false: Santa’s reindeer are all males.

Question 9: What eye color do reindeer have?

Question 10: True or false: Reindeer make a clicking noise as they walk.

Answer 1: True! Reindeer, also called caribou, are the only widely domesticated species of deer. Native Arctic people started the process over 3,000 years ago, according to National Geographic. Reindeer herding still plays an important role in many cultures, like that of the Sámi people of Northern Europe. The Sámi farm reindeer for their milk, fur, antlers and meat. They are also used for transportation and annual reindeer races in Norway.

Answer 2: A: Wild reindeer live in the Arctic tundra of North America and Northern Europe, according to National Geographic. Since they spend up to 40 percent of their lives in the snow, they’re specially adapted to survive wintry weather and temperatures below negative 45 degrees Fahrenheit.

Answer 3: True! Rudolph’s red nose is more lifelike than you may expect! A dense network of blood vessels in reindeers’ noses warms chilly air before it reaches their lungs, giving their noses a pink hue, according to the San Diego Zoo. However, you aren’t likely to see it, as they’re the only species of deer with fur covering their whole nose. They have an excellent sense of smell, too.

Answer 4: C: Specialized fur keeps reindeer warm. A dense downy undercoat is covered by insulating guard hairs, according to the National Park Service. The guard hairs are fantastic insulators because they’re hollow. The hollow properties of their coats also lend reindeer enhanced buoyancy. These seemingly ungainly deer are surprisingly adept swimmers, crossing rivers at up to 6 mph during their annual migrations.

Answer 5: B: Reindeer migrate the farthest of any land animal, roaming around 2,000 miles a year, according to the San Diego Zoo. Herds half a million strong can walk up to 40 miles a day and run at speeds exceeding 50 mph. Big, cloven hooves prevent them from sinking in the snow during their journeys, according to National Geographic. Fur on the underside of each hoof provides traction while the hard outer edge of the hoof cuts into ice. Hooves are also used to dig for food hidden beneath the snow.

Answer 6: B: Lichen makes up almost 90 percent of a reindeer’s winter diet, according to the North American Mycological Association. Reindeer can spot lichens particularly well thanks to their specialized vision: reindeer are one of the few mammals that can see the UV spectrum, according to the BBC. Seeing in UV also allows reindeer to spy approaching predators like wolves.

Answer 7: C: Antlers are also used to dig for food in the snow and fend off predators. Male reindeer grow impressive antlers each year for battle during the rut. A bull’s antlers can be over 50 inches long and weigh 33 pounds, according to the San Diego Zoo. Bulls shed their cumbersome antlers by December, when the breeding season ends. Females, however, keep their smaller antlers until after calving in the spring.

Answer 8: False! That’s right: female reindeer have antlers, too! Unique among the many species of deer, both sexes of reindeer grow antlers. Since Santa’s reindeer are depicted with antlers in late December, they must all be females!

Answer 9: C: Santa sure picked the right species to pull his sleigh. Along with their stamina and warm winter coats, reindeer have superb night vision, according to the Biotechnology & Biological Sciences Research Council. Their night vision is thanks to a reflective layer behind the retina of each eye called the tapetum lucidum. The tapetum changes color seasonally to further enhance their vision: reindeer have golden eyes in the summer and blue eyes in the winter.

Answer 10: True! That click, click up on the rooftop? A tendon in each foot slips over the bones as reindeer walk, producing the sound, according to the Smithsonian. Perhaps there is more than a bit of truth to the Christmas stories.

This holiday season, spread some Christmas cheer with your new knowledge of reindeer. Enjoy winter break, and rest easy knowing that your gifts are in good hands … or should I say, hooves.