From serving as ASWSU vice president to working on several political campaigns, Sean Doster has a lot to cherish at WSU 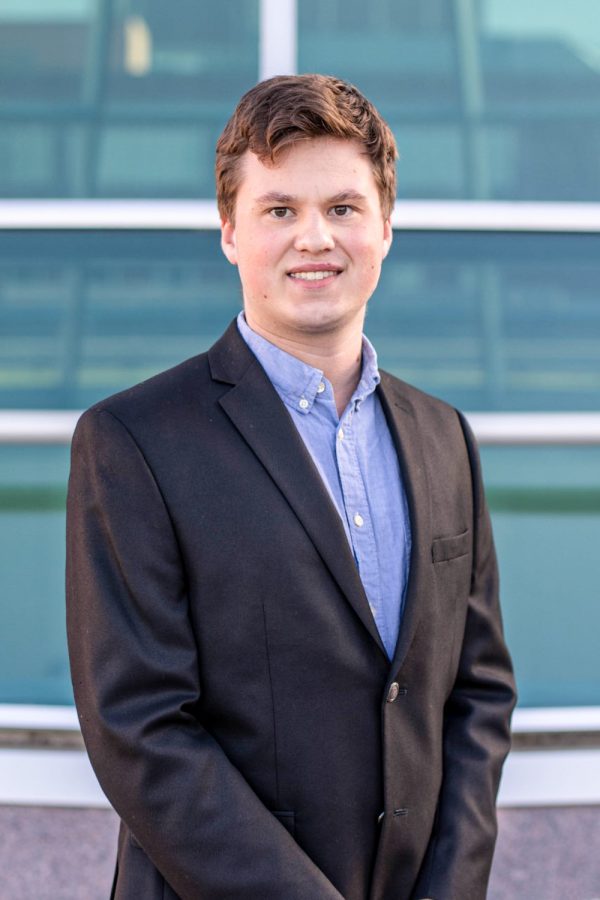 WSU senior Sean Doster knew he wanted to study communications and be involved in public policy pretty early on in his life.

“I kinda knew I wanted to do communication from the get-go because I’d always been a decent writer,” he said. “A little easier path if I’m good at what I’m doing.”

Now, after seven semesters at WSU, the public relations and risk and crisis communication double major is satisfied with his experience at the university.

Among all his accomplishments, including serving as ASWSU vice president, Doster said he is most proud of the relationships and friendships he has made.

“I’ve always been interested in building the community around me,” Doster said. “I don’t really like a dull environment.”

Doster served as a page for the Washington State Legislature during his freshman year of high school.

“That got me interested in politics and public service even more,” he said.

Doster also served as the treasurer in his high school’s Associated Student Body. Doster grew up in Olympia and attended Olympia High School.

“I came [to WSU] because I wanted to go to school in-state,” he said.

Doster got waitlisted by University of Washington, but he said he doubts he would have gone there even if he had been admitted.

Doster said he has a lot of family members who are Cougs and knew WSU was a great school for communications. He decided to go to WSU in his senior year before most of his peers made their decision.

“If I could go back and know everything I know now, I would definitely be coming here for way different reasons. I think I was surprised at the diversity of options of what to do here and the path you could make for yourself,” Doster said.

He said WSU has all the benefits of an R1 research institution while still having a smaller community feeling.

Doster joined the Phi Kappa Sigma fraternity. While he is no longer an active member, he said he appreciates the time in the fraternity for giving him good friends and memories.

He said he appreciates WSU for giving him a lot of life experience. Because Pullman is so small, Doster ran into people he knew often and met others along the way.

He said WSU helped him gain life skills through his relationships.

“Eat, sleep, breath Coug,” he said. “Being a Coug is really about helping your neighbour, building your friends up, making sure everyone gets to the finish line together.”

Doster wrapped up an internship this fall semester working with several municipal races across the state of Washington. He helped elect several candidates to municipal office as an intern on their campaigns.

“I was really proud to have helped elect a couple of really cool candidates to municipal office,” he said.

The Edward R. Murrow College of Communication has raised his journalistic standards and expectations for his next step out of university, he said.

“[I want to] touch the lives of more than just my bank account, you know, something I can really be proud of,” Doster said.

Doster sees himself working with public affairs or nonprofit communication.

“Really just something where I feel like I’m making a difference because I don’t really see the point of doing work where it’s just work,” he said.

He has many people to thank for his success at WSU, including the friends he made upon arriving at the university. He appreciates the friends that would drag him along to the library.

When it comes to ASWSU, Doster credits the president at the time, Curtis Cohen, with supporting him as they served as president and vice president together.

“Not to say everyone’s gonna have a support system walking in, but if you seek out the right people and get yourself out of your comfort zone, you’re gonna find those people,” he said.

“[Murrow advisers] knock it out of the park,” he said.

Doster said his hardest class at WSU was COMJOUR 333 Reporting Across Platforms.

He found it difficult to create multimedia stories in Pullman during the pandemic.

“The Murrow coursework I think is excellent at preparing anybody for the next step,” Doster said. “I learned graphic design, and I also learned how to write a good press release.”

Doster has three pieces of advice for students.

“First and foremost, get involved early,” he said. “Find your people; surround yourself with people who will push you to grow and be better.”

Doster did not get involved on campus until he decided to join ASWSU. He encourages students to be passionate about what they are doing.

“Just take the leap, just do what you’re passionate about because you’re not going to be happy if you don’t care about what you’re doing,” he said.

Doster also encourages students to not worry about their grades as much.

“Don’t make getting a 4.0 prevent you from experiencing everything else Pullman has to offer,” he said.

When Doster thinks of his time in Pullman, he remembers storming the field after the football team’s upset over Oregon when ESPN College Gameday was in town in 2018.

He also remembers being surrounded by friends the night he was elected ASWSU vice president. He said he had many Zoom meetings while serving as vice president.

Doster said he was able to do really well in the spring of 2020 with classes transitioning online. However, once the fall semester came around, he was experiencing burnout at the prospect of more Zoom classes.

“A lot of people in my class never had what you would consider a traditional college experience,” Doster said. “This is my seventh semester, and four of them have been not so normal.”

While this semester has felt a little more normal, he said certain parts of WSU’s culture have changed or evolved.

“Just cherish it while you can. Because I’ve got a week left and I don’t know if I’ve cherished it enough,” Doster said. “[WSU] is a really special place with really special people.”