Cheryl Aarnio studied abroad in France, describes herself as 'odd' 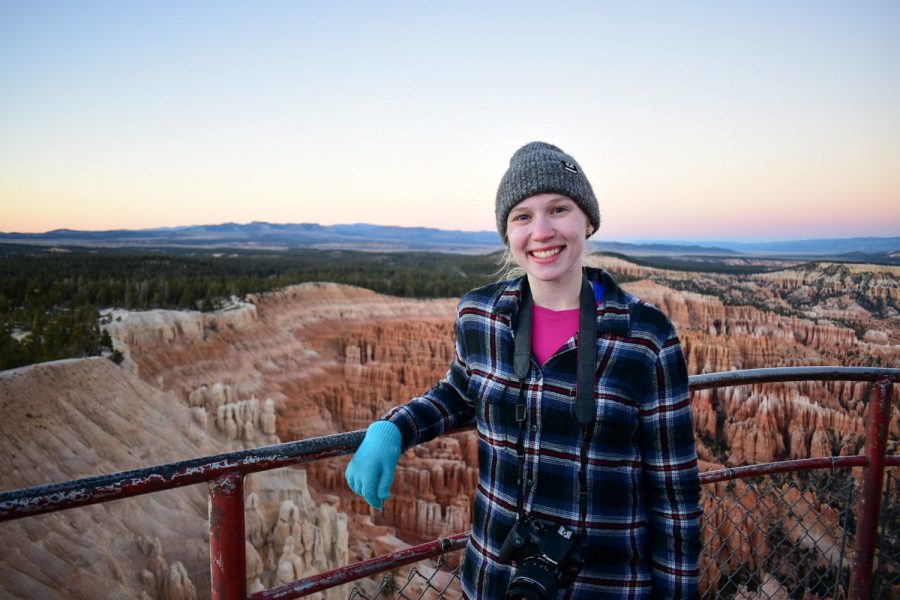 Former Evergreen editor Cheryl Aarnio enjoys hiking and listening to podcasts like “The Daily” in her free time.

Former Evergreen editor Cheryl Aarnio may describe herself as odd — but she is grounded by her desire to achieve great things, whether that’s in her schoolwork or as an editor.

Aarnio is graduating this semester with degrees in journalism and media production and French for the professions.

When she was in high school, Aarnio said she discovered she loved to edit people’s writing in English classes.

“That’s when I was like, ‘oh my gosh, I want to be kind of an editor type thing,’ [but] there’s not really editor undergrad degrees,” Aarnio said. “I knew I didn’t want to get a degree in English because that felt like we’d be analyzing a lot of books, and I just cannot stand analyzing books, so I was like, ‘alright, let’s do journalism.’”

She said she applied to the University of Washington, University of Oregon and WSU. She got accepted into all three universities but decided on WSU because she believes it has the best journalism program.

Throughout Aarnio’s time at WSU, she has been a part of the Honors College, which she said she really likes because she did not have to do UCORE classes. The small classes were also a big highlight for Aarnio because she liked the focus on discussion.

With being in the Honors College, Aarnio said she earned the Certificate of Global Competencies, which is an option program emphasizing international perspectives.

Aarnio studied abroad in France during spring 2020. She said she was supposed to be there from January to May, but got sent back to the U.S. in March because of the pandemic.

When she was in France, she stayed with a host family in Lyon. She took an impressionism class and got the opportunity to study artists such as Vincent Van Gogh. Aarnio said she also took a one-credit class about Lyon where she did some wine tasting and ate charcuterie.

As a freshman, Aarnio started at The Daily Evergreen and had no idea what section she wanted to write for. Someone suggested she write in the news section, so she said she started there.

“I always really enjoyed the interviews more than writing, which I think was my calling to be an editor,” Aarnio said. “I was always like, I don’t really want to write the piece, I just want it written.”

The news editor at that time recommended Aarnio become a copy editor because she was detail-oriented, especially with grammar. After that, she said she became deputy news editor and then research editor in spring 2021.

Aarnio said her favorite experience at WSU was working for The Daily Evergreen.

“Once you got [to the newsroom] in the afternoon — especially in the afternoon, because it’s kind of before a lot of the editors or reporters started work — you just [were] able to have a bunch of fun, and be talking to them, hanging out, doing whatever,” Aarnio said.

Aarnio is currently working part-time at Schweitzer Engineering Laboratories as a marketing associate editor. When working, she mainly edits technical papers and PowerPoints, she said.

If Aarnio had to describe herself in one word, she said she would pick odd. While at the Grand Canyon, she asked one of her friends if they would take a picture of her in the middle of the road.

“I’m just like, ‘take pictures of me in the middle of the road where I could definitely get mowed down by a car.’ [My friend] actually got a picture of me jumping in the road,” Aarnio said. “I just do weird things like that.”

Former Evergreen editor Madysen McLain spent a significant amount of time with Aarnio when they both worked at The Daily Evergreen.

“She’s very smart and she is very determined about her goals. She likes to make sure everything is done well and correctly,” McLain said. “She also likes to have fun too.”

When Aarnio is not doing school or extracurriculars, she is probably outside hiking or listening to a podcast. “The Daily” is the podcast she listens to the most according to her Spotify Wrapped, but she also likes “Today Explained.”